The 2001 Anthrax Attack in the United States

Shortly after the terrorist attack on the World Trade Center in September 2001, anthrax spores were distributed via the U.S. Postal Service.

THE 2001 ANTHRAX ATTACK IN THE UNITED STATES

Shortly after the terrorist attack on the World Trade Center in September 2001, anthrax spores were distributed via the U.S. Postal Service. The anthrax attack was notable in two respects. First, it killed only a small handful of victims, supporting the contention that biological warfare is not usually very effective in practice. Second, it generated a vastly disproportionate reaction, illustrating the importance of the psychological aspects of bioterrorism. Undoubtedly governmental overreaction and public panic did far more damage than the anthrax attack itself.

The anthrax attack came from inside the United States. Furthermore, although the case has not been solved at the time of writing, it is thought likely that the perpetrator was an insider in America’s own biological warfare research establishment. The attacker used the Ames strain of Bacillus anthracis , which is widely used in laboratories in theUnited States.

A major problem with tracing the origin of anthrax outbreaks is that all of the strains of Bacillus anthracis are closely related and difficult to tell apart. No differences in either 16S rRNA or 23S rRNA sequence occur between different strains. In practice analysis is done using variable number tandem repeats or VNTRs. For example, the vrrA gene of Bacillus anthracis contains from two to six copies of the sequence CAATATCAACAA within the coding region for a protein of unknown function ( Fig. 23.4 ). These repeats were probably originally generated by slippage of DNA polymerase during replication. The repeats do not alter the reading frame, but result in corresponding repeats of the four-amino-acid sequence Gln-Tyr-Gln-Gln within the encoded protein. Several other VNTRs are also now used, including some on the pOX1 virulence plasmid. The greatest diversity of Bacillus anthracis strains, as assessed by multiple VNTR analysis, comes from Southern Africa, which is therefore regarded as theprobable homeland of anthrax. 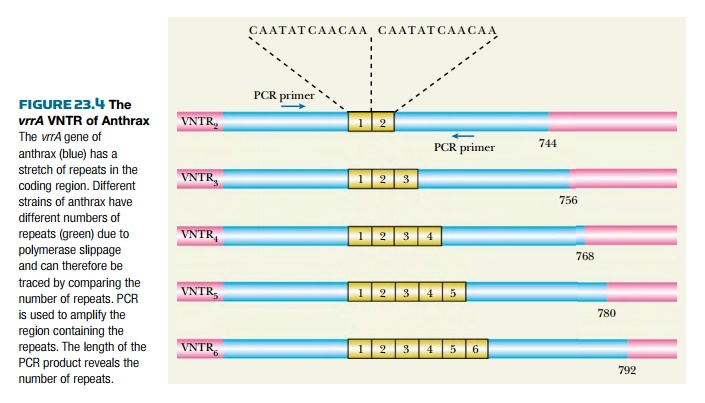