It is often suggested that genetic engineering could be used to create more dangerous versions of infectious agents. Although there is some truth in this assertion, there is also a great deal of exaggeration.

It is often suggested that genetic engineering could be used to create more dangerous versions of infectious agents. Although there is some truth in this assertion, there is also a great deal of exaggeration. Suppose we take a harmless laboratory bacterium such as E. coliand engineer it. The bacteria could be engineered to invade the intestinal wall after being swallowed and to invade other cells. Other genes could be added for ripping vital supplies of iron away from blood cells. And finally, we could add genes for potent toxins that kill human cells. What we would actually achieve is to convert Escherichia coli into its near relative, Yersinia pestis , which causes the bubonic plague—a disease that already exists and is endemic today in India, China, and California!

The reason we are not all dying of virulent epidemics is not any lack of dangerous pathogens, but the existence of modern hygiene and vaccination programs. Given the right conditions, diseases that already exist are quite capable of decimating human populations. From this perspective, the improvement of diseases by genetic engineering is a relatively minor threat.

As regards actual engineering of human infectious diseases, the Soviet germ warfare facility is known to have modified smallpox virus and generated a variety of artificial mutants and hybrids. The details are largely unavailable. However, certain recent experiments with mousepox ( Ectromelia virus) have given disturbing results. Mousepox is related to smallpox, but it only infects mice. Its virulence varies greatly depending on the strain of mouse. Genetically resistant mice rely on cell-mediated immunity, rather than antibodies. Natural killer cells and cytotoxic T cells both destroy cells infected with mousepox virus, thus clearing the virus from the body.

Researchers modified mousepox virus by inserting the human gene for the cytokine interleukin 4 (IL-4) . IL-4 is known to stimulate the division of B cells, which synthesize antibodies. The rationale for engineering the virus was that IL-4 would stimulate the production of antibodies and lead to an improved and more balanced immune response. What actually happened was the opposite of what was expected: the creation of a virus with vastly greater virulence. Not only did it kill all of the genetically resistant mice, but it also killed 50% of mice that had been vaccinated against mousepox. The expression of excess IL-4 suppressed the NK cells and cytotoxic T cells. Furthermore, it failed to increase the antibody response. The reasons are not fully understood at present, but do serve to remind us that the immune system is under extremely complex control. 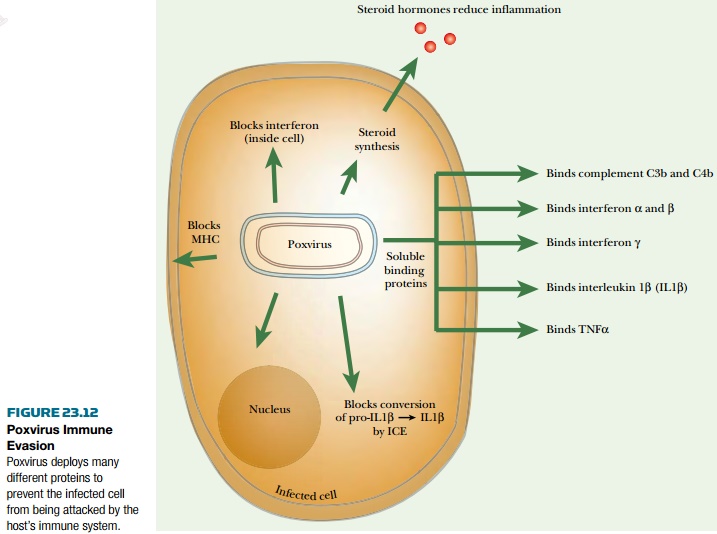 Similar results have been seen with strains of Vaccinia virus, used for vaccination. Whether insertion of IL-4 or other immune regulators into smallpox itself would lead to increased virulence by undermining the immune response is unknown. Poxviruses already carry genes designed to protect the virus by interfering with the action of NK cells and cytotoxic T cells ( Fig. 23.12 ). These are the cytokine response modifier genes ( crm genes), and they vary in effectiveness between different poxviruses. Thus it is possible that one reason why smallpox is so virulent is that it already subverts the body’s cell-mediated immune response. In this case, addition of IL-4 would be expected to give little or no further increase in virulence.