Many higher plants make ribosome-inactivating proteins (RIPs) . These split theN-glycosidic bond between adenine and ribose, releasing adenine from a specific sequence in the large-subunit ribosomal RNA (28S rRNA in eukaryotes, 23S rRNA in prokaryotes). In rat 28S rRNA, the target nucleotide is adenine 4324 ( Fig. 23.8 ). Clipping adenine from the rRNA totally inactivates the ribosome. RIPs are enzymes and can therefore catalyze many successive reactions. Consequently, a single RIP molecule is sufficient to inactivate all the ribosomes and kill a whole cell. The Shiga toxins of Shigella dysenteriae (causative agent of bacterial dysentery) and the related toxins made by some pathogenic strains of E. coli share the same mechanism. 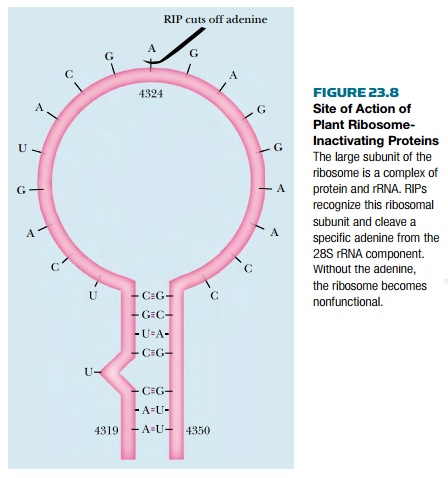 The target adenosine nucleotide lies within a highly conserved loop close to the 3′end of rRNA. Removal of the single adenine makes the large subunit of the ribosome incapable of binding elongation factor 2 (EF2). Protein synthesis is therefore prevented. The RIPs attack purified rRNA from both bacteria and higher organisms. However, intact ribosomes from different groups of organisms differ greatly in their sensitivity to RIPs. Mammalian ribosomes are by far the most sensitive. In particular, the activity of many RIPs against the bacterial ribosome is low or negligible, and this has allowed the genes for some RIPs to be cloned and expressed in E. coli .

The RIPs are divided into two classes. Type I RIPs consist of a single protein chain and are relatively nontoxic because of their inability to enter mammalian cells effectively. In contrast, type II RIPs consist of two chains, A and B, and are some of the most toxic agents known. Like many bacterial toxins the A chain expresses the toxic enzyme activity and the B chain mediates entry into the target cell. The most famous type II RIP, ricin , is lethal at around 3 micrograms/ kilogram body weight, meaning that half a milligram should kill a large human. Though less well known, Abrin, from the rosary pea, is 10-fold more toxic. Ricin achieved international notoriety in 1978 when the Bulgarian defector Georgi Markov was assassinated in a London street by ricin. The communist assassin wielded a modified umbrella that injected a hollow 0.6-mm-diameter metal sphere, filled with ricin, into Markov’s leg. 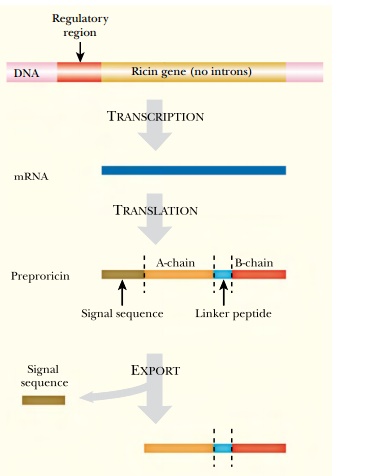 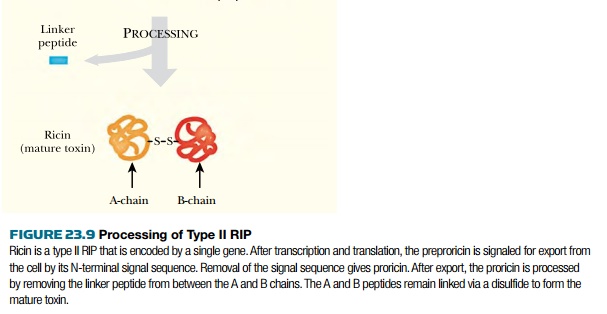 The RIPs are synthesized as precursor proteins (pre-RIPs) that are processed only after exiting from the cytoplasm of the plant cell responsible for making them; therefore, the toxin does not kill the plant. Ricin is encoded by a single gene and synthesized as a single precursor polypeptide. This is processed in two stages. After export the signal sequence is cleaved from the N terminus. Next an intervening peptide is cut out to leave two shorter polypeptide chains held together by a disulfide bond ( Fig. 23.9 ). The A chain is very similar to the type I RIPs, and the B chain is a lectin that binds to galactose residues in cell surface glycoproteins. (Lectins are plant carbohydrate binding proteins.) Ricin is extracted from the seeds of the castor bean plant, Ricinus communis ( Fig. 23.10 ). This is widely grown, both for ornamentationand on a large scale for castor oil production. Because of its high toxicity, stability, the lack of any antidote, and the ready availability of the raw material, several extremist groups have attempted to purify and use ricin. For example, in 1991 in Minnesota, four members of the Patriots Council, an extremist group with an antigovernment, antitax ideology, purified ricin in a home laboratory. They were arrested for plotting to kill a U.S. marshal with ricin. 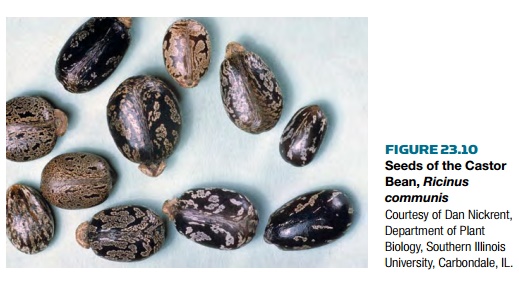