An alternative form of biological warfare is the destruction of the food supply. Instead of using pathogenic microorganisms that target humans directly, infectious agents that target food animals or crop plants might be used.

An alternative form of biological warfare is the destruction of the food supply. Instead of using pathogenic microorganisms that target humans directly, infectious agents that target food animals or crop plants might be used. Because domestic animals also rely on crops to eat and humans can survive on a vegetarian diet, in practice the obvious targets are staple crops such as cereals or potatoes. A wide variety of diseases exist that destroy such crop plants and might be used for biological warfare. Primitive fungi, such as rusts, smuts, and molds, cause many plant diseases. Their spores are often highly infectious, dispersed by wind or rain, and in many cases there is no effective treatment. 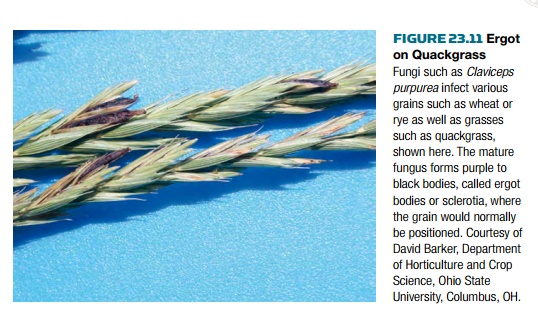 Soybean rust and wheat stem rust are examples of pathogenic fungi that could destroy major crops. In addition to destruction of the crop, certain fungi may produce toxins. For example, when the ergot fungus grows on rye or other cereals, it produces a mixture of toxins that cause a syndrome referred to as ergotism, which causes sickness and death in people and livestock ( Fig. 23.11 ). An entire crop might have to be screened even if only a small part was infected, causing major disruption and economic losses. Spores from pathogenic fungi could be sprayed into the air from a single small plane. Another approach would be the deliberate infection of seeds. Many seeds planted in the United States today are now grown in other countries, where they might be accessed for contamination before importing. Modern agriculture is especially vulnerable to biowarfare because large acreages are planted at high density with genetically identical cultivars of major crops. This reduces the genetic variability that makes natural populations relatively resistant to many infections. It also makes it relativelyeasy for any infection to spread rapidly. Another advantage of agricultural biowarfare is that the agents used are harmless to humans and so would pose no danger to those using them.