Germ Warfare among the Lower Eukaryotes

Paramecium is a well-known ciliated protozoan. Many strains of Paramecium carry symbiotic bacteria ( Caedibacter ), known as kappa particles , that grow and divide inside the larger, eukaryotic, Paramecium cell.

GERM WARFARE AMONG THE LOWER EUKARYOTES 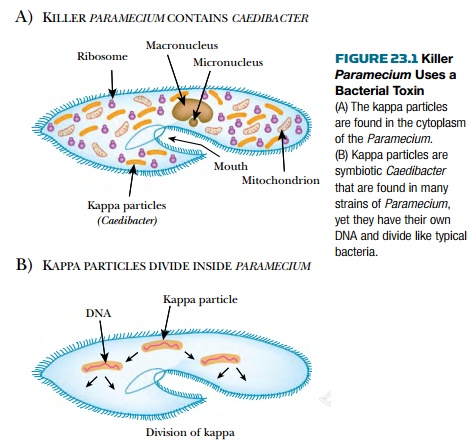 The toxin gene is borne not on the chromosome of the symbiotic bacteria, but on a bacterial plasmid derived from a defective bacterial virus. So a toxin encoded by a virus infecting the kappa particle bacteria has been diverted to the purpose of killing other strains of Paramecium . This appears to be a  general principle. Many of the toxins used by pathogenic bacteria that infect humans are actually encoded by DNA of nonchromosomal origin—viruses, plasmids, or transposons. These elements are often integrated into the chromosome of pathogenic strains of bacteria.

Some insects rely on viruses to wage biological warfare. Certain parasitic wasps inject their eggs into plant-eating maggots (i.e., the larvae of plant-eating insects). After the eggs hatch, the newborn wasps eat the living maggots from inside. The maggots are eventually killed and a new generation of wasps is released to continue their life cycle. 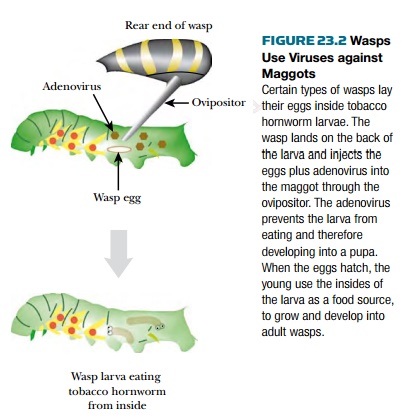 The secret to the wasp’s success is injecting a virus along with their eggs ( Fig. 23.2 ). The virus, a member of the adenovirus family, targets the maggot’s “fat body” (vaguely equivalent to the liver of higher animals). The virus cripples both the maggot’s developmental control system and its primitive immune system. The maggot loses its appetite for plants and is prevented from molting and turning into a pupa, the next stage on the way to an adult insect capable of laying more eggs. There are many types of plant-eating maggots, including major agricultural pests such as the tobacco budworm and cotton bollworm, and many types of wasps that attack them, and consequently many types of viruses, each designed to soften up a particular insect larva.