The basic strategy of germ warfare is to choose a human disease and use it to eliminate or frighten away human competitors. Perhaps the disease agent could even be improved by genetic engineering, as discussed later. However, several major factors need to be considered. The relative importance of these factors will depend on whether biowarfare agents are intended for use on a military scale or by terrorists.

One major problem with biological warfare is that death from infectious diseases is slow. Even the most virulent pathogens, such as Ebola virus or the pneumonic form of Black Death, take a few days to kill. Thus infected personnel would still be capable of fighting for a significant period. In contrast, conventional weapons kill or incapacitate rapidly.

Another drawback to germ warfare is the problem of delivery. Most protocols for spreading infections deliberately involve some sort of airborne delivery. This tends to place delivery at the whim of the weather. Not only do you need a breeze, but also the wind needs to blow in the right direction! During the 1950s the British government conducted field tests with harmless bacteria. When the wind blew them over “healthy” farmland, many of the airborne bacteria survived the trip and reached the ground alive. In contrast, when the wind blew the bacteria over industrial areas, especially oil refineries or similar installations, the airborne bacteria were almost all killed. In the event of aerial delivery,even if the wind is in the right direction, most of the population of an industrial nation will be found in cities where they will be at least partly protected from airborne bacteria by air pollution!

In addition, many infectious agents are sensitive to desiccation and become inactive if exposed to air for significant periods of time. Moreover, natural UV radiation from the sun also inactivates many bacteria and viruses. Thus most biowarfare agents must be protected from this “open air factor” before use and then dispersed as rapidly as possible.

Dispersal by terrorists involves rather different considerations. Delivery of small batches of biowarfare agents can be performed individually in a variety of ways—for example, by mailing letters containing anthrax spores. The minimalist dispersal scheme is to infect a volunteer and have him or her use public transport among crowded target populations.

Persistence of the Agent

Once biological weapons have been successfully used, the victor presumably wants to move in and take over the enemy territory. This may involve exposing the invading troops to the infectious agent, depending how long it persists in the environment. Anthrax is a favorite biological weapon because it acts rapidly and is highly lethal. Unfortunately, Bacillus anthracis,which causes this disease, spreads by forming spores that are tough, difficult to destroy, and last for an extremely long time. When suitable conditions return, the spores germinate and resume growth as normal bacterial cells. In contrast, many viruses last only a few days, if that, outside their animal or human hosts. However, infections due to these agents may persist among the local population, and this too may prove a threat to an invading army.

Storage of the Agent

Preparation of the Agent

Some pathogenic microorganisms are relatively easy to grow in culture, whereas others are extremely difficult and/or expensive to manufacture in sizeable quantities. One major drawback with viruses is that they can grow only inside host cells. Culturing animal cells is far more difficult than growing bacteria and the yields are much lower. Large-scale manufacture of viruses is expensive and difficult. Many bacteria (e.g., plague, tularemia, typhoid) are relatively easy to culture. In the years just after World War II, the British kept large-scale cultures of Yersinia pestis , the agent of plague, growing continuously in case of need. Doubtless other nations did much the same.

Another factor is the issue of formulation. That is, the disease agent must be prepared in a manner that facilitates storage and dispersal. Both bacterial cells and spores tend to clump together spontaneously. Consequently, they must be weaponized to disperse them effectively by aerosols and other delivery systems. This issue is highly technical, and the details are beyond the scope of this book.

In addition to inherent problems with culturing bacteria or viruses, there is the need for protecting personnel who work with infectious agents. High-containment laboratories are needed for research and development in such areas.

Biological containment is rated on a scale with four levels. Laboratories with a biosafety level 4 rating are needed for working with agents such as Ebola virus. Operations are done inside safety cabinets with glove ports. The whole laboratory is sealed off and kept at a little under normal atmospheric pressure. That way, if there is a leak, air will leak in (not out!).

To enter a high-containment facility involves exchanging outside clothes for a separate set of lab clothes—in extreme cases not just lab coats but lab underwear, too! Spacesuitstyle protective clothing may be used at the highest biosafety levels ( Fig. 23.3 ). Entry is via an air lock, and exits are provided with disinfectant showers and ultraviolet lights. Lab clothes are left behind. Some high-containment labs are designed so that the only exit is via total submersion in a pool of disinfectant. Ultraviolet lights are used to sterilize both the laboratories themselves and the air locks, especially when working with viruses. Using high-containment facilities not only is expensive but is very time consuming. High containment is also needed for any bioweapons manufacturing facility. Here everything is on a large industrial scale and the problems are correspondingly worse. On the other hand, terrorist groups may care only about secrecy and be willing to take risks that are unacceptable to an industrialized nation. Similarly, Third World dictatorships may not care about casualties, but if a suspected biowarfare agent escapes into the surrounding population it will draw unwelcome attention. 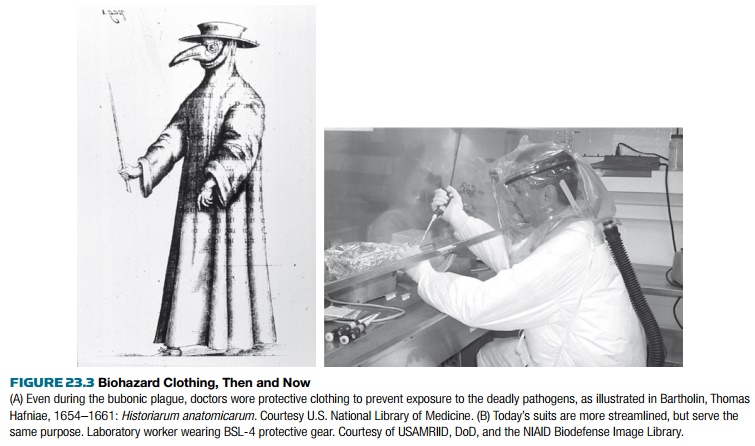