Thallium is a soft and pliable metal which is acquiring an increasingly notorious reputation as an ideal homicidal poison.

Thallium is a soft and pliable metal which is acquiring an increasingly notorious reputation as an ideal homicidal poison. Important derivatives include thallous sulfate, acetate, chloride, iodide, nitrate, and carbonate. Most of these salts (particularly thallous sulfate), are odourless, tasteless, and freely soluble in water.

·      Thallium is a cellular toxin. It behaves as a potassium analogue and is distributed intracellularly to all the tissues of the body, but changes in distribution occur with the passage of time. At low levels, thallium replaces potassium in the sodium-potassium ATPase pump; at high levels it competitively inhibits sodium potassium ATPase.

·      Thallium also has an affinity for sulfhydryl groups. The blocking of sulfhydryl cross-linking in keratin causes alopecia and abnormalities in nail growth which are mani-fested as Mees’ lines.

Absorption can occur through inhalation, ingestion, or even across intact skin.

·              Urine that is first voided after poisoning may show a green discolouration.

·              Alopecia (Fig 9.23)—One of the pathognomonic signs ofchronic thallium intake, it begins about 10 days after the   first dose and may lead to total scalp hair loss in about a month if the intake is continued. Apart from scalp hair, the lateral halves of the eyebrows is (peculiarly) affected. Regrowth of the hair occurs if the patient survives the poisoning. 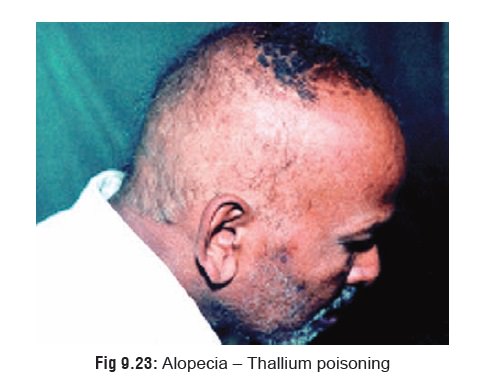 ·              Skin rash—This is in the form of a papulomacular rashwhich often assumes a “butterfly” distribution on the face. There may be acneiform eruptions.

·              Painful ascending peripheral sensorimotor neuropathy. Pain and paraesthesias are most pronounced in the lower limbs, particularly the soles. Painful peripheral neuropathy and paraesthesia, primarily of the legs and feet, are among the first symptoms noted. Pain may be described as aching, tingling or burning and may be so severe as to prohibit walking. Paraesthesias may develop within 2 to 6 days in severe poisoning. Loss of pain, temperature, vibratory and position sense may all occur and an unsteady gait may develop.

·              Other symptoms and signs—autonomic dysfunction,testicular toxicity, hypokalaemia, renal failure, and hepatic dysfunction. A bluish line in the gums may appear 3 to 4 weeks post-ingestion. Respiratory failure often develops in patients with severe motor neurop-athy. Prolonged ventilatory support may be required.

The outstanding combination of alopecia and skin rash,painful peripheral neuropathy, and mental confusion with lethargy (thallium triad), in any clinical case must immediatelyarouse the suspicion of chronic thallium poisoning. A high level of suspicion should be kept for thallium poisoning in patients with painful peripheral neuropathy and gastrointestinal symptoms, which appear much earlier than alopecia, since the prognosis is much better with early diagnosis and treatment.

·              Tests of contrast sensitivity and colour vision are useful in the early detection of optic neuropathy in thallium poisoning.

·      Microscopy of scalp hair may reveal a diagnostic pattern of black pigmentation of hair roots.

·      Urine test: Combine a few drops of urine with 3 drops of saturated bromine water, 3 drops of sulfosalicylic acid, 1 drop of HCl, 2 drops of a solution of 0.05 gram of rhoda-mine B in 100 ml of concentrate HCl. Mixture add 1 ml of benzene, shake, centrifuge, and examine the benzene layer. A bright yellow or fluorescent red colour indicates a positive result.

·      In acute poisoning, stomach wash can be done with Prussian Blue [potassium ferric ferrocyanide or potassium ferric hexacyanoferrate i.e. KFe(Fe(CN)6)] which prevents the absorption of thallium by binding with it, exchanging potas-sium for thallium in its crystal lattice network. Prussian Blue is then instilled through a duodenal tube (125 mg/kg twice a day, with 50 ml of 15% mannitol).* This is continued until the urinary excretion falls below 0.5 mg/day.

·      Forced diuresis in conjunction with potassium chloride. Potassium chloride therapy has been reported to enhance excretion of thallium, but there are conflicting reports as to its efficacy in enhancing elimination.

·      Haemodialysis along with haemoperfusion can remove significant amounts of thallium from the blood.

·      Diethyldithiocarbamate (Dithiocarb) was till recently advocated as an antidote. However it sometimes leads to a worsening of the patient’s condition and is therefore not recommended today.

·      Special attention must be paid to oral hygiene, otherwise a severe stomatitis may result.

If treatment is instituted in time, recovery from thallium

poisoning is the rule, though this may take a long time. There may be residual effects such as amnesia, ataxia, tremor, and foot drop. 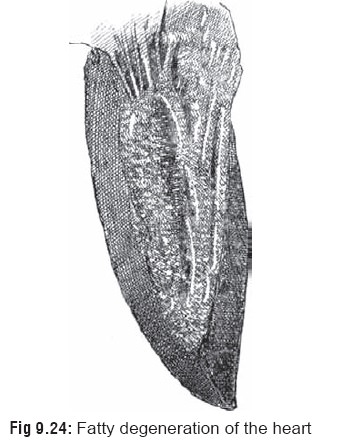 ·      Cerebral oedema with widespread degeneration of nerve cells and axons.

■■   Accidental poisoning occurs due to industrial or occupa-tional exposure. It can also occur inadvertently from its use as a rodenticide. Several instances of accidental poisoning have been reported in children who have consumed cock-roach or rat bait containing thallium.

■■  Suicides with thallium have always been rare in India, though they were relatively common abroad until the 1960s when legislation was passed in most Western countries greatly restricting its availability for use as pesticides. In 1975, USA banned its use altogether as a rodenticide.

■■The most disturbing aspect about thallium today is its increasing deployment by poisoners to commit murder. There have been several celebrated cases of murder reported over a period of time, especially in Western countries.