Tests Based on Complement Fixation - Immunoserology

When antigen and antibodies of the IgM or the IgG classes are mixed, complement is “fixed” to the antigen-antibody aggregate.

Tests Based on Complement Fixation

When antigen and antibodies of the IgM or the IgG classes are mixed, complement is “fixed” to the antigen-antibody aggregate. If this occurs on the surface of a red blood cell, the complement cascade will be activated and hemolysis will occur. The method actually involves two antigen-antibody-complement systems: a test system and an indicator system (Fig. 15.9). 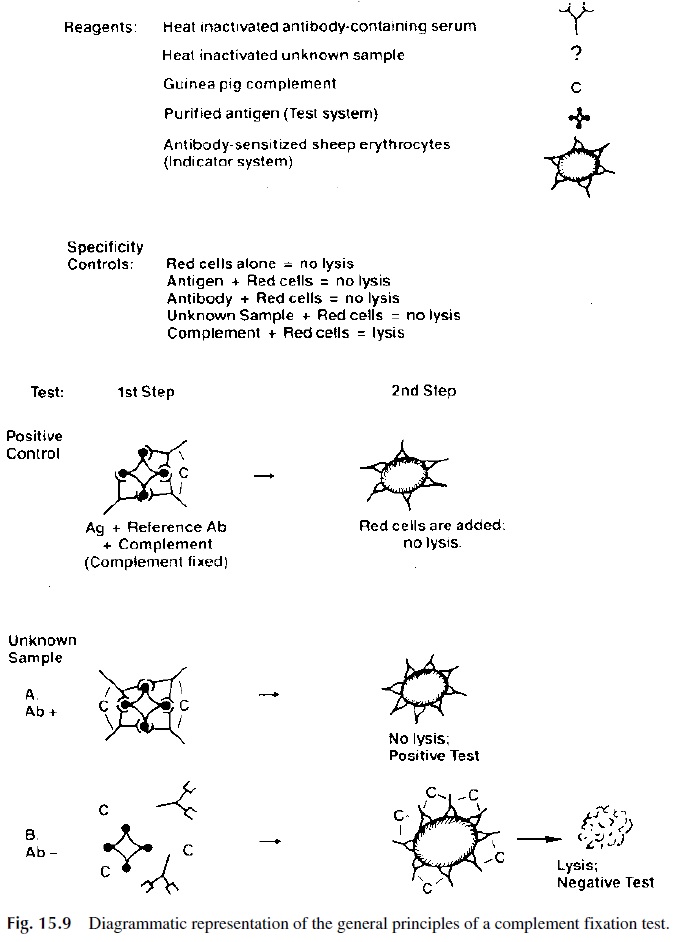 The indicator system consists of red blood cells that have been preincubated with a specific anti–red cell antibody in concentrations that do not cause agglutination and in the absence of complement to avoid hemolysis; these are designated as “sensitized” red cells.

In the test system, patient’s serum is first heated to 56°C to inactivate the native complement and adsorbed with washed sheep red blood cells (RBC) to eliminate broadly cross-reactive anti–red cell antibodies (also known as Forssman antibodies), which could interfere with the assay. Then the serum is mixed with purified antigen and with a dilu-tion of fresh guinea pig serum used as a controlled source of complement. The mixture is incubated for 30 minutes at 37°C to allow any antibody in the patient’s serum to form complexes with the antigen and fix complement. Sensitized red cells are then added to the mixture.

If the red cells are lysed, it indicates that there were no antigen-specific antibodies in the serum of the patient, so complement was not consumed in the test system and was avail-able to be used by the anti-RBC antibodies, resulting in hemolysis. This reaction is consid-ered negative. If the red cells are not lysed, it indicates that antibodies specific to the anti-gen were present in the test system, “fixed” complement, but none were available to be activated by the indicator system. This reaction is considered positive.

Complement-fixation tests are widely applicable to the detection of antibodies to almost any antigen. Thus, complement-fixation reactions have been widely used in a large number of tests designed to assist in the diagnosis of specific infections, such as the Wassermann test for syphilis and tests for antibodies to Mycoplasma pneumoniae,Bordetella pertussis, many different viruses, and fungi such asCryptococcus, Histo-plasma, and Coccidioides immitis. However, the methodology is riddled with technicaldifficulties, and complement-fixation tests have been progressively replaced by other methods.