Conceptually, the enzyme immunoassay (EIA) is very close to solid phase RIA; one of the components of the reaction (antigen if the purpose is to assay antibodies; antibody if the purpose is to assay antigens) is adsorbed onto a solid phase (e.g., polystyrene tubes, plastic microtiter plates, plastic or metal beads, plastic discs, absorbent pads, etc.). The second step varies, depending on the type of assay.

In a “sandwich” assay for antigen, the second step consists of adding the antigen-containing sample to immobilized antibody. In a direct antibody assay, the second step is adding the antibody-containing sample to immobilized antigen (Fig. 15.16). In these two types of assays, the next step is basically the same: labeled antibody needs to be added. 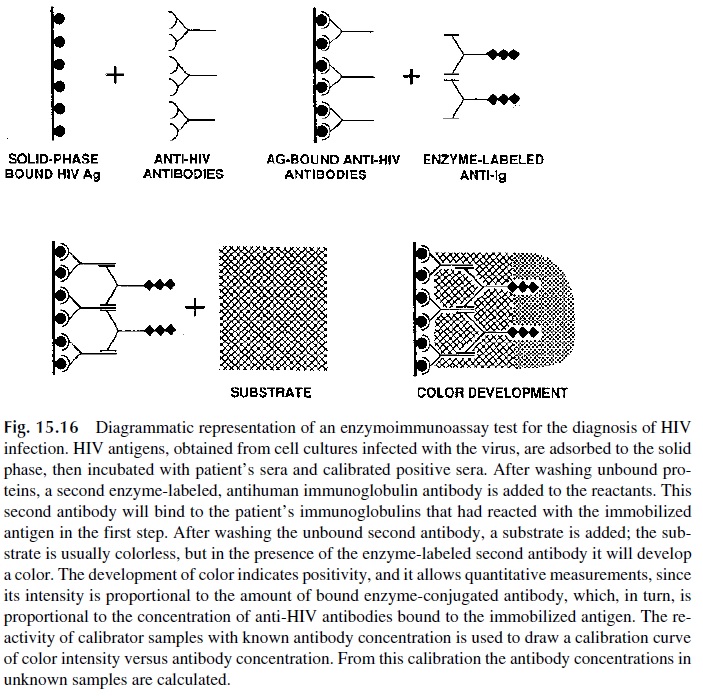 In the sandwich assay, the labeled antibody is of similar specificity to the antibody bound to the solid phase (antibodies reacting to different epitopes of the same antigen are preferred). In the direct antibody assay, the labeled antibody is an anti-immunoglobulin antibody. Fi-nally, an enzyme-labeled component (antigen or antibody) is added, and after incubation and washing a color or chemiluminescence-generating substrate is added. In either case the color intensity is directly proportional to the concentration of the reactant being measured.

As a result of its relative simplicity and versatility, and because the shelf life of reagents is longer and there are no special problems with their storage and disposition, EIA has become perhaps the most widely used immunological assay method. Its sensitivity al-lows the assay of nanogram and picogram amounts without great difficulty and can be fur-ther increased by modifications of the technique. Enzymoimmunoassays for antimicrobial antibodies, antigen detection, and hormone and drug assay have been successfully devel-oped and commercialized. The most important limitations of EIA are related to cross-reac-tions and nonspecific reactions, both of which can lead to false-positive results, which is a greater problem in assays of enhanced sensitivity.

Among the most interesting developments in the last decade are the rapid diagnosis EIA kits that have been developed for pregnancy and for a variety of infections, including streptococcal sore throat, respiratory syncytial virus infections, viral influenza, and HIV in-fection. These kits are extremely simple to use and can be used at home by the patients or at any doctor’s office with minimal training and instrumentation.

The original rapid tests for pregnancy were sandwich assays that used two mono-clonal antibodies recognizing two different, noncompeting epitopes in human chorionic gonadotrophin. One antibody was immobilized onto a solid phase, and its function is to capture the antigen (hCG). The second was labeled with an enzyme and would be retained on the solid surface only if antigen had been captured by the first antibody. The retention of labeled antibody was detected by a color reaction secondary to the breakdown of an ad-equate substrate. These tests usually involved two or more steps. One-step tests were later developed, but the manufacturers have not divulged details about their exact design.