Tax is a compulsory payment by the citizens to the government to meet the public expenditure.

“A Tax is a compulsory payment made by a person or a firm to a government without reference to any benefit the payer may derive from the government.” -Anatol Murad

“A Tax is a compulsory contribution imposed by public authority, irrespective of the exact amount of service rendered to the tax payer in return and not imposed as a penalty for any legal offence.” - Dalton

1. A tax is a compulsory payment made to the government. People on whom a tax is imposed must pay the tax. Refusal to pay the tax is a punishable offence.

2. There is no quid pro quo between a taxpayer and public authorities. This means that the tax payer cannot claim any specific benefit against the payment of a tax.

3. Every tax involves some sacrifice on part of the tax payer.

4. A tax is not levied as a fine or penalty for breaking law.

Some of the tax revenue sources are

The revenue obtained by the government from sources other than tax is called Non-Tax Revenue. The sources of non-tax revenue are

Fees are another important source of revenue for the government. A fee is charged by public authorities for rendering a service to the citizens. Unlike tax, there is no compulsion involved in case of fees. The government provides certain services and charges certain fees for them. For example, fees are charged for issuing of passports, driving licenses, etc.

A fine is a penalty imposed on an individual for violation of law. For example, violation of traffic rules, payment of income tax after the stipulated time etc.

The Government also gets revenue by way of surplus from public enterprises. Some of the public sector enterprises do make a good amount of profits. The profits or dividends which the government gets can be utilized for public expenditure.

It is a kind of special charge levied on certain members of the community who are beneficiaries of certain government activities or public projects. For example, due to a public park or due to the construction of a road, people in that locality may experience an appreciation in the value of their property or land.

It refers to the claim of the state to the property of persons who die without legal heirs or documented will.

The characteristics or qualities which a good tax should possess are described as canons of taxation. It must be noted that canons refer to the qualities of an isolated tax and not to the tax system as a whole. A good tax system should have a proper combination of all kinds of taxes having different canons.

According to Adam Smith, there are four canons or maxims of taxation. They are as follows: 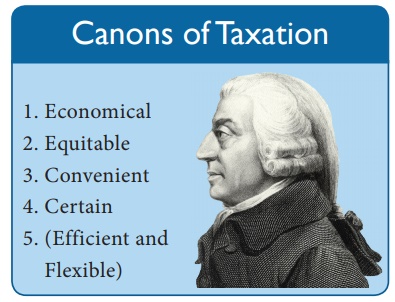 The Government should impose tax in such a way that the people have to pay taxes according to their ability. In such case a rich person should pay more tax compared to a middle class person or a poor person.

The Government must ensure that there is no uncertainty regarding the rate of tax or the time of payment. If the Government collects taxes arbitrarily, then these will adversely affect the efficiency of the people and their working ability too.

The method of tax collection and the timing of the tax payment should suit the convenience of the people. The Government should make convenient arrangement for all the tax payers to pay the taxes without difficulty.

A direct tax is referred to as a tax levied on person’s income and wealth and is paid directly to the government; the burden of such tax cannot be shifted. The tax is progressive in nature. It is levied according to the paying capacity of the person, i.e. the tax is collected more from the rich and less from the poor people.

The plans and policies of the Direct Taxes are being recommended by the Central Board of Direct Taxes (CBDT) which is under the Ministry of Finance, Government of India. 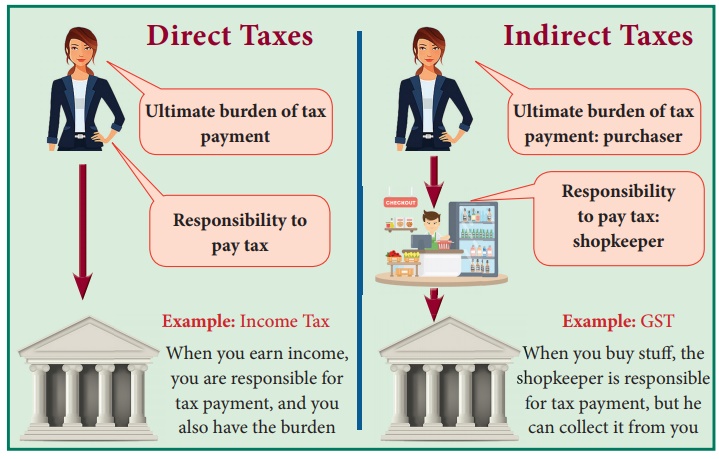 Direct taxes are progressive i.e. rate of tax varies according to tax base. For example, income tax satisfies the canon of equity.

Canon of certainty can be ensured by direct taxes. For example, an income tax payer knows when and at what rate he has to pay income tax.

The cost of collection of direct taxes is relatively low. The tax payers pay the tax directly to the state.

It is inconvenient and less flexible.

According to many economists direct tax may adversely affect productivity. Citizens are not willing to earn more income because in that case they have to pay more taxes.

The burden of direct tax is so heavy that tax-payers always try to evade taxes. This ultimately leads to the generation of black money, which is harmful to the economy.

Indirect Tax is referred to as a tax charged on a person who purchases the goods and services and it is paid indirectly to the government. The burden of tax can be easily shifted to the another person. It is levied on all persons equally whether rich or poor.

There are several types of Indirect Taxes, such as:

Excise Duty: Payable by the manufacturer who shifts the tax burden to retailers and wholesalers.

Sales Tax: Paid by a shopkeeper or retailer, who then shifts the tax burden to customers by charging sales tax on goods and services.

Custom Duty: Import duties levied on goods from outside the country, ultimately paid for by consumers and retailers.

Entertainment Tax: Liability is on the cinema theatre owners, who transfer the burden to cinema goers.

Service Tax: Charged on services like telephone bill, insurance premium such as food bill in a restaurant etc.

The indirect tax satisfies the canon of equity when higher tax is imposed on luxuries used by rich people.

Cost of collection is less as producers and retailers collect tax and pay to the Government. The traders act as honorary tax collectors.

The Government imposes indirect taxes on those commodities which are harmful to health e.g. tobacco, liquor etc. They are known as sin taxes.

Indirect taxes are levied on commodities and services. Whenever consumers make purchase, they pay tax along with the price. They do not feel the pinch of paying tax.

Indirect taxes are sometimes unjust and regressive in nature since both rich and poor persons have to pay same amount as taxes irrespective of their income level.

The rise in indirect taxes increase the price and reduces the demand for goods. Therefore, the Government is uncertain about the expected revenue collection. So Dalton says under indirect taxes 2+2 is not 4 but 3 or even less than 3.

As the tax is hidden in price, the consumers are not aware of paying tax. 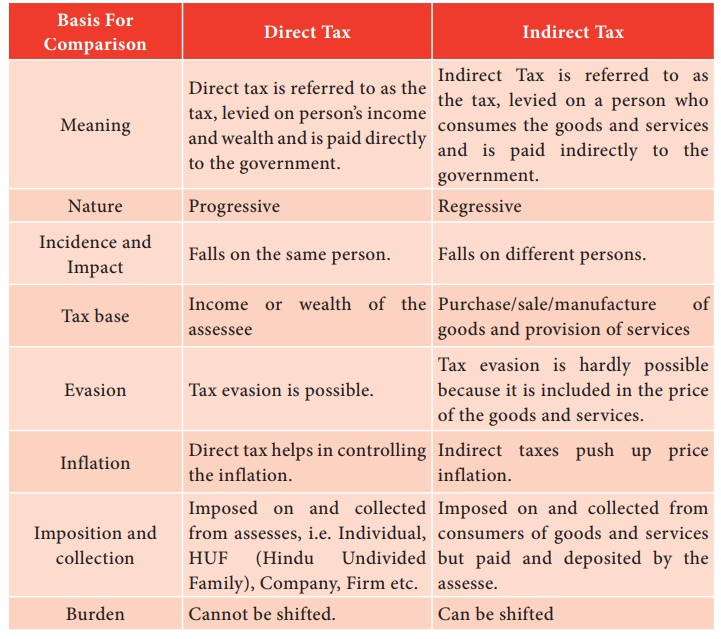 GST is an Indirect Tax which has replaced many Indirect Taxes in India. The Goods and Service Tax Act was passed in the Parliament on 29th March 2017. The Act came into effect on 1st July 2017; Goods & Services Tax in India is a comprehensive, multi-stage, destination-based tax that is levied on every value addition.

In simple words, Goods and Service Tax (GST) is an indirect tax levied on the supply of goods and services. This law has replaced many indirect tax laws that previously existed in India.

GST is one indirect tax for the entire country.

Under the GST regime, the tax will be levied at the final point of sale. In case of intra-state sales, Central GST and State GST will be charged. Inter-state sales will be chargeable to Integrated GST. 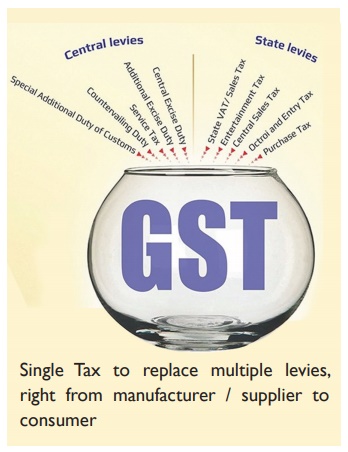 Consider goods manufactured in Tamil Nadu and are sold to the final consumer in Karnataka. Since Goods Service Tax is levied at the point of consumption, in this case, Karnataka, the entire tax revenue will go to Karnataka and not Tamil Nadu.

The component of GST are of 3 types.

CGST: Collected by the Central Government on an intra-state sale (Eg: Within state/ union territory)

SGST: Collected by the State Government on an intra-state sale (Eg: Within state/ union territory)

In most cases, the tax structure under the new regime will be as follows:

3. GST is one point tax without cascading effect.

2. GST is also mainly technologically driven. All activities like registration, return filing, application for refund and response to notice need to be done online on the GST Portal. This will speed up the processes.