As an instrument of macro-economic policy, fiscal policy has been very popular among modern governments. The growing importance of fiscal policy was due to the Great Depression and the development of ‘New Economics’ by Keynes.

“The term fiscal policy refers to a policy under which the Government uses its expenditure and revenue programmes to produce desirable effects and avoid undesirable effects on the national income, production and employment” – Arthur Smithies

“By fiscal policy is meant the use of public finance or expenditure, taxes, borrowing and financial administration to further our national economic objectives” – Buehler

i) Taxation: Taxes transfer income from the people to the Government. Taxes are either direct or indirect. An increase in tax reduces disposable income. So taxation should be raised to control inflation. During depression, taxes are to be reduced.

ii) Public Expenditure: Public expenditure raises wages and salaries of the employees and thereby the aggregate demand for goods and services. Hence public expenditure is raised to fight recession and reduced to control inflation.

iii) Public debt: When Government borrows by floating a loan, there is transfer of funds from the public to the Government. At the time of interest payment and repayment of public debt, funds are transferred from Government to public. 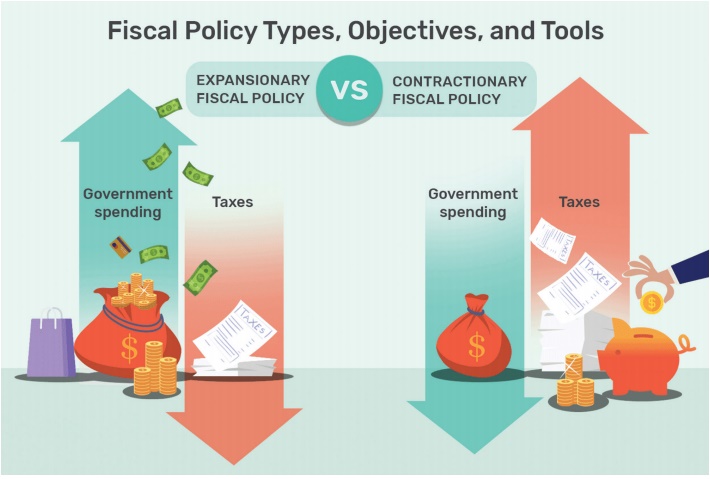 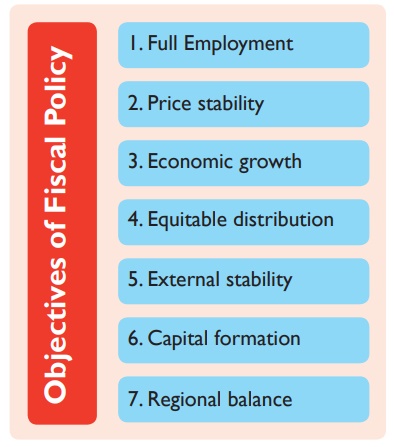 The Fiscal Policy is useful to achieve the following objectives:

To fight depression, the Government needs to increase its spending and reduce taxation.

Fiscal Policy is used to increase the productive capacity of the economy. Tax is to be used as an instrument for encouraging investment. Tax holidays and tax rebates for new industries stimulate investment. Public sector investments are to be increased to fill the gap left by private investment. When resource mobilization through tax measures is inadequate, the Government resorts to borrowing both from internal and external sources to finance growth projects.

Progressive rates in taxation help to reduce the gap between rich and poor. Similarly progressive rates in public expenditure through welfare schemes such as free education, noon meal for school children and subsidies promote the living standard of poor people.

Fluctuations in international trade cause movements in exchange rate. Tax concessions and subsidy to export oriented units help to boost exports. Customs duties on import of non-essential items help to cut import bill. The reduction in import duty on import of raw material and machinery enables reduction in cost and make the exports competitive.