The TT&C subsystem performs several routine functions aboard the spacecraft. The telemetry, or telemetering, function could be interpreted as measurement at a distance.

The TT&C subsystem performs several routine functions aboard the spacecraft. The telemetry, or telemetering, function could be interpreted as measurement at a distance. Specifically, it refers to the overall oper- ation of generating an electrical signal proportional to the quantity being measured and encoding and transmitting this to a distant station, which for the satellite is one of the earth stations.

Telemetry and command may be thought of as complementary func- tions. The telemetry subsystem transmits information about the satellite to the earth station, while the command subsystem receives command sig- nals from the earth station, often in response to telemetered information. The command subsystem demodulates and, if necessary, decodes the com- mand signals and routes these to the appropriate equipment needed to exe- cute the necessary action.

Thus attitude changes may be made, communication transponders switched in and out of circuits, antennas redirected, and station-keeping maneuvers carried out on command. It is clearly important to prevent unauthorized commands from being received and decoded, and for this reason, the command signals are often encrypted.

Encrypt is derived from a Greek word kryptein, meaning to hide, and rep- resents the process of concealing the command signals in a secure code. This differs from the normal process of encoding which converts characters in the command signal into a code suitable for transmission.

Tracking of the satellite is accomplished by having the satellite trans- mit beacon signals which are received at the TT&C earth stations.

Tracking is obviously important during the transfer and drift orbital phases of the satellite launch. Once it is on station, the position of a geo- stationary satellite will tend to be shifted as a result of the various dis- turbing forces, as described previously.

Therefore, it is necessary to be able to track the satellite’s movement and send correction signals as required.

A transponder is the series of interconnected units which forms a single communications channel between the receive and transmit antennas in a communications satellite.

Some of the units utilized by a transponder in a given channel may be common to a number of transponders. Thus, although reference may be made to a specific transponder, this must be thought of as an equipment channel rather than a single item of equipment.

Before describing in detail the various units of a transponder, the overall frequency arrangement of a typical C-band communications satellite will be examined briefly. The bandwidth allocated for C-band service is 500 MHz, and this is divided into subbands, one transponder.

A typical transponder bandwidth is 36 MHz, and allowing for a 4-MHz guardband between transponders, 12 such transponders can be accommodated in the 500-MHz bandwidth. 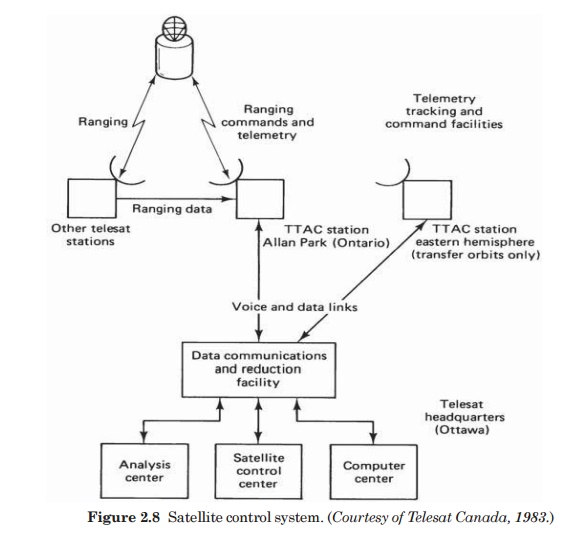 Because the carriers with opposite senses of polarization may overlap in frequency, this technique is referred to as frequency reuse. Figure 2.9 shows part of the frequency and polarization plan for a C-band communications satellite. 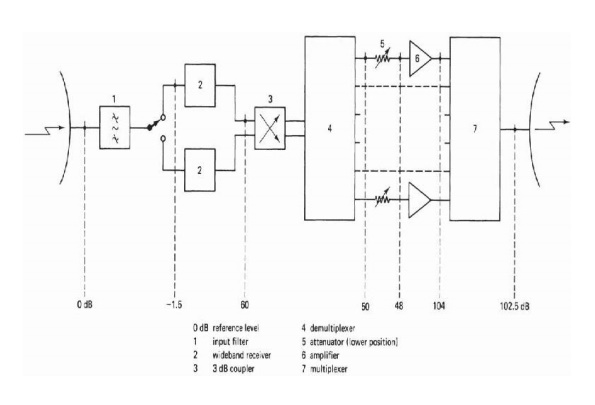 Frequency reuse also may be achieved with spot-beam antennas, and these may be combined with polarization reuse to provide an effective bandwidth of 2000 MHz from the actual bandwidth of 500 MHz.

For one of the polarization groups, Fig. 2.9 shows the channeling scheme for the 12 transponders in more detail. The incoming, or uplink, frequency range is 5.925 to 6.425 GHz.

The frequency conversion shifts the carriers to the downlink frequency band, which is also 500 MHz wide, extending from 3.7 to 4.2 GHz. At this point the signals are channelized into frequency bands which represent the individual transponder bandwidths.

The wideband receiver is shown in more detail in Fig. 2.10. A duplicate receiver is provided so that if one fails, the other is automatically switched in. The combination is referred to as a redundant receiver, meaning that although two are provided, only one is in use at a given time.

The first stage in the receiver is a low-noise amplifier (LNA). This amplifier adds little noise to the carrier being amplified, and at the same time it provides sufficient amplification for the carrier to override the higher noise level present in the following mixer stage. 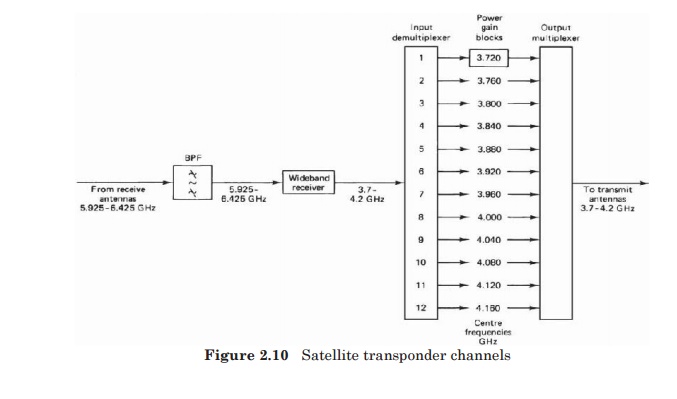 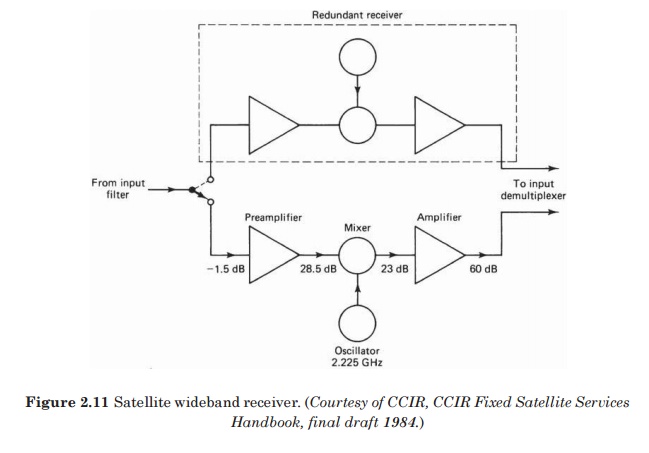 involving noise, it is usually more convenient to refer all noise levels to the LNA input, where the total receiver noise may be expressed in terms of an equivalent noise temperature.

The LNA feeds into a mixer stage, which also requires a local oscillator (LO) signal for the frequency-conversion process.

With advances in field-effect transistor (FET) technology, FET amplifiers, which offer equal or better performance, are now available for both bands. Diode mixer stages are used.

The amplifier following the mixer may utilize bipolar junction transistors (BJTs) at 4 GHz and FETs at 12 GHz, or FETs may in fact be used in both bands.

The input demultiplexer separates the broadband input, covering the frequency range 3.7 to 4.2 GHz, into the transponder frequency channels.

The output from the receiver is fed to a power splitter, which in turn feeds the two separate chains of circulators. 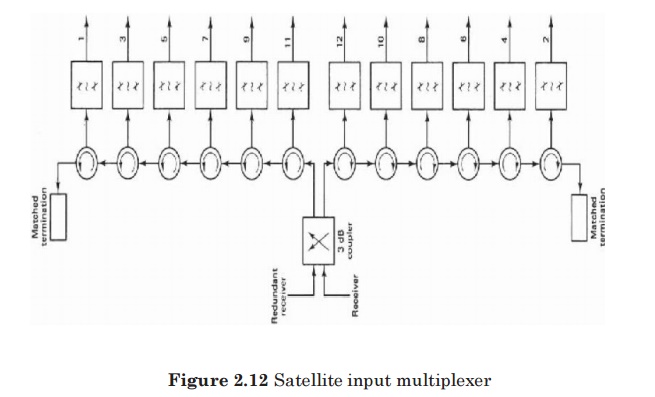 The full broadband signal is transmitted along each chain, and the channelizing is achieved by means of channel filters con- nected to each circulator, Each filter has a bandwidth of 36 MHz and is tuned to the appropriate center frequency, as shown in Fig. 2.11.

Although there are considerable losses in the demultiplexer, these are easily made up in the overall gain for the transponder channels.

The fixed attenuation is needed to balance out variations in the input attenuation so that each transpon- der channel has the same nominal attenuation, the necessary adjust- ments being made during assembly.

The variable attenuation is needed to set the level as required for different types of service (an example being the requirement for input power backoff discussed later). Because this variable attenuator adjustment is an operational requirement, it must be under the control of the ground TT&C station.

Traveling-wave tube amplifiers (TWTAs) are widely used in transpon- ders to provide the final output power required to the transmit antenna. Figure 2.13 shows the schematic of a traveling wave tube (TWT) and its power supplies.

In the TWT, an electron-beam gun assembly consisting of a heater, a cathode, and focusing electrodes is used to form an elec- tron beam. A magnetic field is required to confine the beam to travel along the inside of a wire helix. 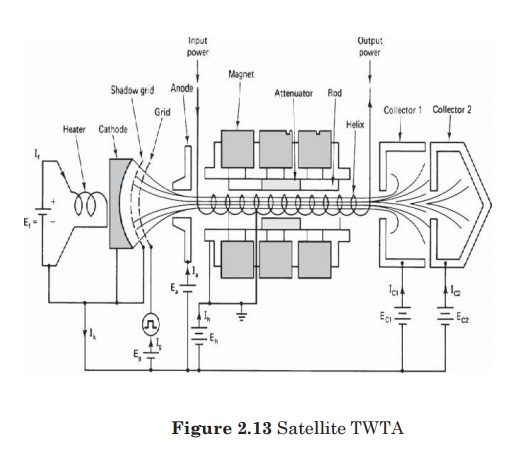 used in ground stations, the magnetic field can be provided by means of a solenoid and dc power supply. The comparatively large size and high power consumption of solenoids make them unsuitable for use aboard satellites, and lower-power TWTs are used which employ permanent- magnet focusing.

The wave actually will travel around the helical path at close to the speed of light, but it is the axial component of wave velocity which interacts with the electron beam.

This component is less than the velocity of light approximately in the ratio of helix pitch to circumference. Because of this effective reduction in phase velocity, the helix is referred to as a slowwave structure.

The advantage of the TWT over other types of tube amplifiers is that it can provide amplification over a very wide bandwidth. Input levels to the TWT must be carefully controlled, however, to minimize the effects of certain forms of distortion.

The worst of these result from the nonlinear transfer characteristic of the TWT, illustrated in Fig. 2.14. 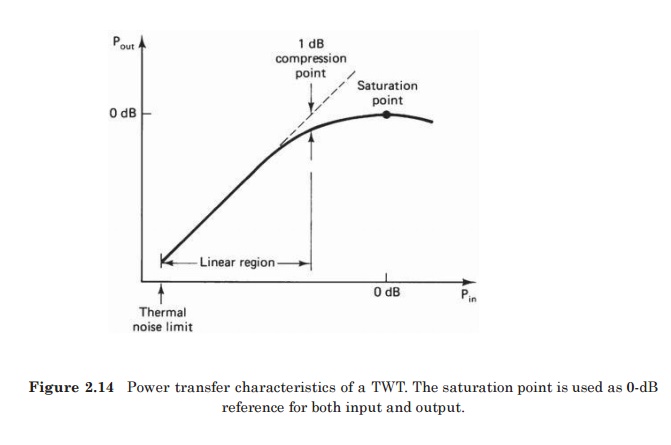 The saturation point is a very convenient reference point, and input and output quantities are usually referred to it. The linear region of the TWT is defined as the region bound by the thermal noise limit at the low end and by what is termed the 1-dB compression point at the upper end. This is the point where the actual transfer curve drops