This chapter describes how the link-power budget calculations are made.

This chapter describes how the link-power budget calculations are made.

These calculations basically relate two quantities, the transmit power and the receive power, and show in detail how the difference between these two powers is accounted for.

Link-budget calculations are usually made using decibel or decilog quantities. These are explained in App. G. In this text [square] brackets are used to denote decibel quantities using the basic power definition.

Where no ambiguity arises regarding the units, the abbreviation dB is used. For example, Boltzmann’s constant is given as 228.6 dB, although, strictly speaking, this should be given as 228.6 deci logs relative to 1 J/K.

A key parameter in link-budget calculations is the equivalent isotropic radiated power, conventionally denoted as EIRP. From Eqs, the maximum power flux density at some distance r from a transmitting antenna of gain G i

An isotropic radiator with an input power equal to GPS would produce the same flux density. Hence, this product is referred to as the EIRP, or EIRP is often expressed in decibels relative to 1 W, or dBW. Let PS be in watts; then [EIRP] = [PS] x [G] dB ,where [PS] is also in dBW and [G] is in dB.

The [EIRP] may be thought of as the power input to one end of the transmission link, and the problem is to find the power received at the other end.

Losses will occur along the way, some of which are constant.

Other losses can only be estimated from statistical data, and some of these are dependent on weather conditions, especially on rainfall.

The first step in the calculations is to determine the losses for clear- weather or clear-sky conditions. These calculations take into account the losses, including those calculated on a statistical basis, which do not vary significantly with time. Losses which are weather-related, and other losses which fluctuate with time, are then allowed for by introducing appropriate fade margins into the transmission equation.

As a first step in the loss calculations, the power loss resulting from the spreading of the signal in space must be determined. 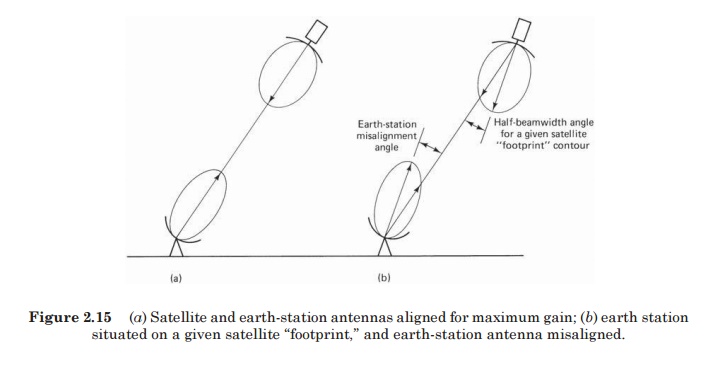