The attitude of a satellite refers to its orientation in space. Much of the equipment carried aboard a satellite is there for the purpose of control- ling its attitude.

The attitude of a satellite refers to its orientation in space. Much of the equipment carried aboard a satellite is there for the purpose of control- ling its attitude. Attitude control is necessary, for example, to ensure that directional antennas point in the proper directions.

In the case of earth environmental satellites, the earth-sensing instruments must cover the required regions of the earth, which also requires attitude control. A number of forces, referred to as disturbance torques, can alter the attitude, some examples being the gravitational fields of the earth and the moon, solar radiation, and meteorite impacts.

Attitude control must not be con- fused with station keeping, which is the term used for maintaining a satellite in its correct orbital position, although the two are closely related.

To exercise attitude control, there must be available some measure of a satellite’s orientation in space and of any tendency for this to shift. In one method, infrared sensors, referred to as horizon detectors, are used to detect the rim of the earth against the background of space.

With the use of four such sensors, one for each quadrant, the center of the earth can be readily established as a reference point.

Usually, the attitude-control process takes place aboard the satellite, but it is also possible for control signals to be transmitted from earth, based on attitude data obtained from the satellite.

Also, where a shift in attitude is desired, an attitude maneuver is executed. The control signals needed to achieve this maneuver may be transmitted from an earth station.

Controlling torques may be generated in a number of ways. Passive attitude control refers to the use of mechanisms which stabilize the satellite without putting a drain on the satellite’s energy supplies; at most, infrequent use is made of these supplies, for example, when thruster jets are impulsed to provide corrective torque. Examples of passive attitude control are spin stabilization and gravity gradient sta- bilization.

The other form of attitude control is active control. With active atti- tude control, there is no overall stabilizing torque present to resist the disturbance torques. Instead, corrective torques are applied as required in response to disturbance torques. Methods used to generate active control torques include momentum wheels, electromagnetic coils, and mass expulsion devices, such as gas jets and ion thrusters. 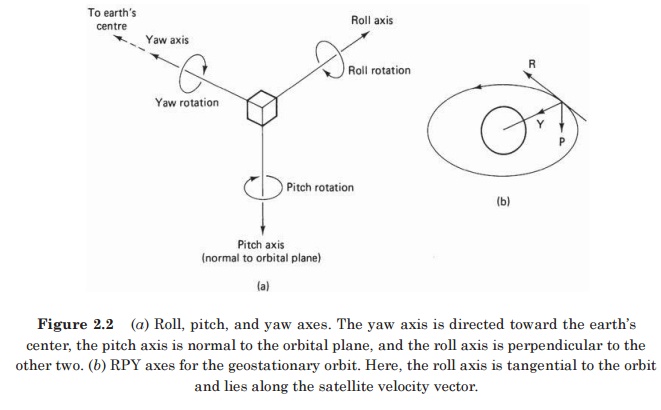 The three axes which define a satellite’s attitude are its roll, pitch, and yaw (RPY) axes. These are shown relative to the earth in Fig. 7.4. All three axes pass through the center of gravity of the satellite. For an equatorial orbit, movement of the satellite about the roll axis moves the antenna footprint north and south; movement about the pitch axis moves the footprint east and west; and movement about the yaw axis rotates the antenna footprint.

Spin stabilization may be achieved with cylindrical satellites. The satellite is constructed so that it is mechanically balanced about one partic- ular axis and is then set spinning around this axis. For geostationary satellites, the pin axis is adjusted to be parallel to the N-S axis of the earth, as illustrated in Fig. 7.5. Spin rate is typically in the range of 50 to 100 rev/min. Spin is initiated during the launch phase by means of small gas jets.

overall effect is that the spin rate will decrease, and the direction of the angular spin axis will change. Impulse-type thrusters, or jets, can be used to increase the spin rate again and to shift the axis back to its cor- rect N-S orientation.

Nutation, which is a form of wobbling, can occur as a result of the disturbance torques and/or from misalignment or unbalance of the control jets. This nutation must be damped out by means of energy absorbers known as nutation dampers.

The antenna feeds can therefore be connected directly to the transponders without the need for radiofrequency (rf) rotary joints, while the complete platform is despun. Of course, control signals and power must be transferred to the despun section, and a mechanical bearing must be provided.

The complete assembly for this is known as the bearing and power transfer assembly (BAPTA). Figure 2.4 shows a photograph of the internal structure of the HS 376.

Certain dual-spin spacecraft obtain spin stabilization from a spinning fly- wheel rather than by spinning the satellite itself. These flywheels are termed momentum wheels, and their average momentum is referred to as momentum bias 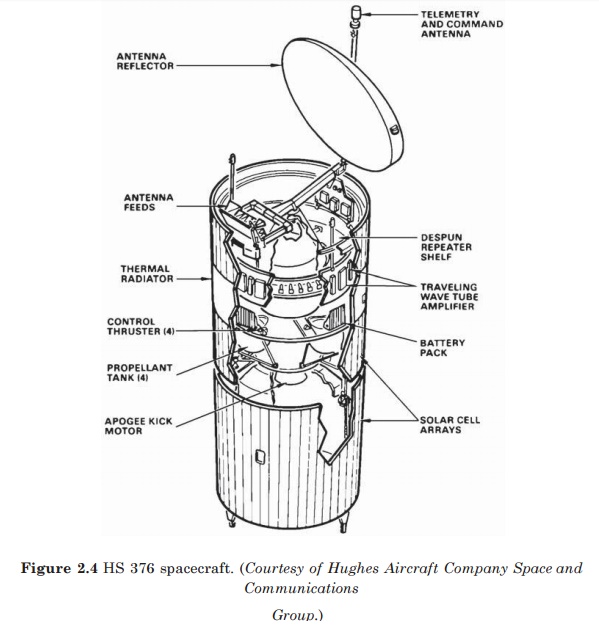 In the previous section the gyroscopic effect of a spinning satellite was shown to provide stability for the satellite attitude.

Stability also can be achieved by utilizing the gyroscopic effect of a spinning flywheel, and this approach is used in satellites with cube-like bodies (such as shown in Fig. and the INTELSAT V type satellites shown in Fig. These are known as body-stabilized satellites.

The complete unit, termed a momentum wheel, consists of a flywheel, the bearing assembly, the casing, and an electric drive motor with associated electronic con- trol circuitry.

Thus the motor provides the coupling between the flywheel and the satellite structure. Speed and torque control of the motor is exercised through the currents fed to the stator. 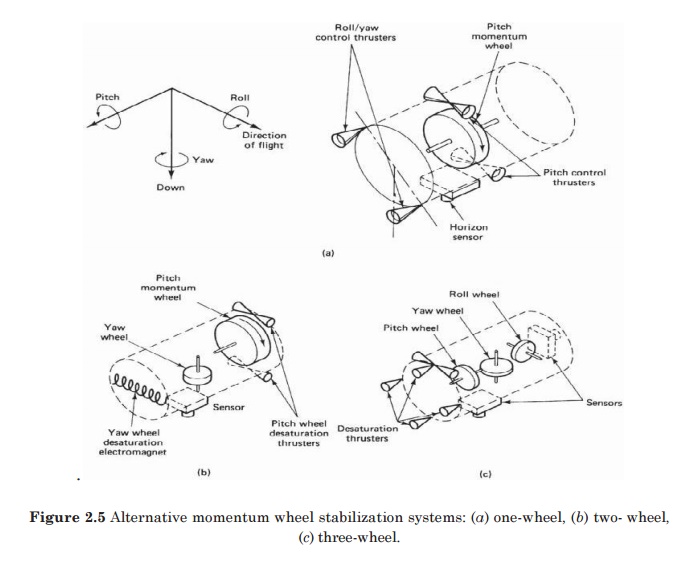 In effect, it reaches its maximum allowable angular velocity and can no longer take in any more momentum. Mass expulsion devices are then used to unload the wheel, that is, remove momentum from it (in the same way a brake removes energy from a moving vehicle). Of course, operation of the mass expulsion devices consumes part of the satellite’s fuel supply.