The downlink of a satellite circuit is the one in which the satellite is transmitting the signal and the earth station is receiving it.

The downlink of a satellite circuit is the one in which the satellite is transmitting the signal and the earth station is receiving it. Equation can be applied to the  downlink, but subscript D will be used to denote specifically that the downlink is being considered. Thus Eq. becomes

In Eq. the values to be used are the satellite EIRP, the earth- station receiver feeder losses, and the earth-station receiver G/T. The free space and other losses are calculated for the downlink frequency. The resulting carrier-to-noise density ratio given by Eq. is that which appears at the detector of the earth station receiver.

Where input BO is employed as described in a corresponding output BO must be allowed for in the satellite EIRP. As the curve of Fig. 2.16 shows, output BO is not linearly related to input BO. A rule of thumb, frequently used, is to take the output BO as the point on the curve which is 5 dB below the extrapolated linear portion, as shown in Fig. 12.7. Since the linear portion gives a 1:1 change in decibels, the relationship between input and output BO is [BO]0 [BO]i 5 dB. For example, with an input BO of [BO]i 11 dB, the corresponding output BO is [BO]0

In the C band and, more especially, the Ku band, rainfall is the most significant cause of signal fading. Rainfall results in attenuation of radio waves by scattering and by absorption of energy from the wave.

Rain attenuation increases with increasing frequency and is worse in the Ku band compared with the C band.

This produces a depolarization of the wave; in effect, the wave becomes ellipti- cally polarized. This is true for both linear and circular polar- izations, and the effect seems to be much worse for circular polarization (Freeman, 1981).

The C/N0 ratio for the downlink alone, not counting the PNU contribution, is PR/PND, and the combined C/N0 ratio at the ground receiver is 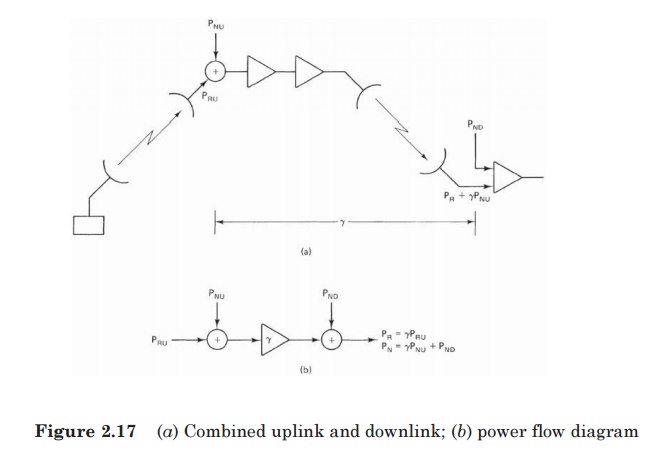 The reason for this reciprocal of the sum of the reciprocals method is that a single signal power is being transferred through the system, while the various noise powers, which are present are additive. Similar reasoning applies to the carrier-to-noise ratio, C/N.