There is solid experimental evidence supporting clonal deletion as a mechanism involved in T-cell tolerance. Of seminal importance were the experiments in which transgenic mice were transfected with the gene coding for a T-cell receptor (TcR) cloned from a MHC-I re-stricted CD8+ cytotoxic T-cell clone specific for the male HY antigen (Fig. 16.2). This TcR was able to mediate a cytotoxic reaction against any cell expressing the HY antigen. 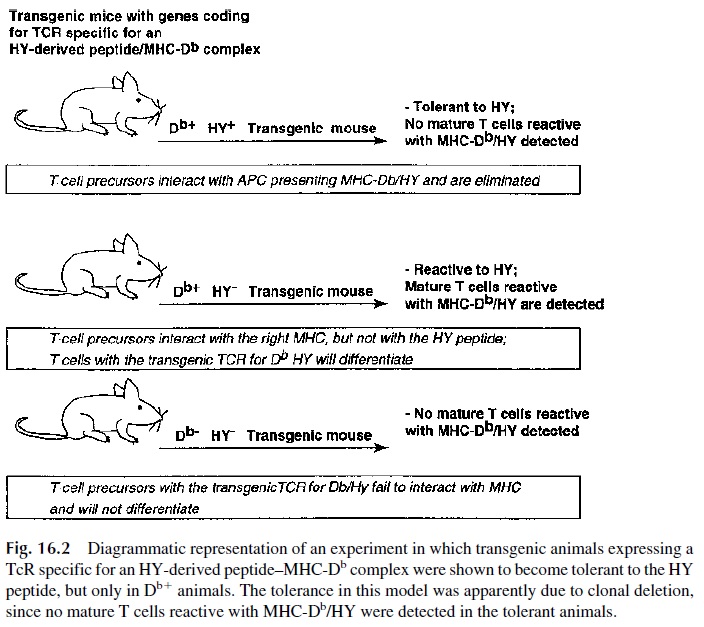 These observations were interpreted as meaning that those lymphocytes expressing the autoreactive TcR and the CD8+ antigen interacted effectively with a cell presenting an immunogenic HY-derived peptide in association with a MHC-I molecule, and those cells were deleted. CD4+ lymphocytes, even if carrying the same TcR, cannot interact effec-tively with MHC-I–associated HY-derived peptides and were spared . Similar experiments using mice transfected with genes coding for MHC class II restricted TcRs showed that the CD4+ lymphocytes were selectively deleted, as expected from the fact that the reaction between a TcR and an MHC-II–associated peptide is stabilized by CD4 molecules. In other words, the role of CD4 and CD8 as stabilizers of the reaction be-tween T lymphocytes and antigen-presenting cells is not only important for antigenic stim-ulation but is also critical for clonal deletion.

A common aspect of all types of clonal deletion is that cell death is due to apoptosis  involving interaction of the Fas molecule with its ligand. However, many de-tails concerning the control of T-cell apoptosis remain unexplained.

Experimental models addressing the question of how T cells become tolerant to tissue-spe-cific determinants that are not expressed in the thymus have provided evidence for the role of clonal anergy. Transgenic mice were constructed in which the transgene was coupled to a tissue-specific promoter that directed their expression to an extrathymic tissue. For ex-ample, heterologous MHC class II (I-E) genes were coupled to the insulin promoter prior to their injection to fertilized eggs. Consequently, the MHC class II antigens coded by the transfected genes were expressed only in the pancreatic islet β cells. Class II (I-E) specific helper T cells were detectable in the transgenic animals, but they could not be stimulated by exposure to lymphoid cells expressing the transfected MHC-II genes. Thus, tolerance to a peripherally expressed MHC-II self antigen can be due to clonal anergy.

Proper stimulation of mature CD4+ T lymphocytes requires at least two signals: one de-livered by the interaction of the TcR with the MHC-II–Ag complex, while the other sig-nal(s) is (are) delivered by the accessory cell. Both signals require cell-cell contact involv-ing a variety of surface molecules and the release of soluble cytokines. When all these signals are properly transmitted to the T lymphocyte, a state of activa-tion ensues. Several experiments suggest that the state of anergy develops when TcR-mediated signaling is not followed by co-stimulatory signals. For example, a state of anergy is induced when T lymphocytes are stimulated with chemically fixed accessory cells (which cannot release cytokines or upregulate membrane molecules involved in the deliv-ery of co-stimulatory signals) or with purified MHC-II–antigen complexes (which also can-not provide co-stimulatory signals).

From the multitude of co-stimulatory pairs of molecules that have been described, the CD28/CTLA4-B7 family is the most significant in the physiology of T-cell anergy. CD28-mediated signals are necessary to induce the production of IL-2, which seems to be critical for the initial proliferation of TH O cells and eventual differentiation of TH1 cells. CD28 en-gagement also results in a lower threshold for effective TCR activation and therefore may enhance the lower avidity interactions between TCR and autoantigens. If the interaction be-tween CD28 and its ligand is prevented at the onset of the immune response, anergy and tolerance ensue. Also, if CD80/86 molecules interact with CTLA4 rather than CD28, a downregulating signal is delivered to the T lymphocyte . In contrast to the interactions involving CD28, those that involve CTLA4 may increase the threshold of T-cell activation and inhibit T-cell responses to low-affinity autoantigens.

The molecular basis for T-cell anergy is emerging. On one hand there seems to be an inhibition of the MAP kinase pathway, resulting in decreased Jun and Fos induction or ac-tivation and, consequently, to a decreased expression of the genes regulated by NF-AT1 that include the IL-2 gene and many other cytokine genes. On the other hand, there is evi-dence suggesting that anergy is associated with the expression of cAMP-regulating ele-ments that have a direct suppressive effect on the transcription of the IL-2 gene.

It is possible that a parallel could be defined for B-cell anergy. The CD40 (B cells)–CD40 ligand (T cells) interaction is critically important for B-cell differentiation. In the absence of CD40 signaling, B cells are easy to tolerize. The differences between high-zone versus low-zone tolerance may be a result of differences in the degree of co-stimula-tion received by T cells. In high-zone tolerance, the co-stimulatory signals are excessively strong and both T cells and B cells are downregulated. Very low antigen doses fail to in-duce the delivery of co-stimulatory signals to T cells, and low-zone T-cell tolerance ensues.

Clonal deletion seems extremely efficient during embryonic differentiation, but a large number of potentially autoreactive clones seem to escape deletion. Whether those autore-active clones remain anergic or are activated may just depend on whether the autoantigens against which they are directed are ever presented in a context able to induce an active im-mune response, i.e., by activated APC able to deliver co-stimulatory signals to the autore-active T and/or B cells. Under normal physiological conditions, the recognition of au-toantigens is more likely to take place in the absence of co-stimulatory signals by helper T cells, conditions that are likely to contribute to the perpetuation of a state of T-cell anergy. The perpetuation of the anergic state by incomplete signaling of autoreactive clones is be-lieved to be significant in the maintenance of tolerance in adult life.