Acquired tolerance can be induced in experimental animals under the right conditions, known as tolerogenic conditions.

Acquired tolerance can be induced in experimental animals under the right conditions, known as tolerogenic conditions (Table 16.1). The main factors that influence the devel-opment of tolerance are as follows:

1.           Immune competence of the host. Newborn inbred mice of strain A injected withlymphoid cells from mice of a different genetic strain (strain B) prior to reach-ing adult life and immunological maturity can tolerate a skin graft from mice of the donor strain (strain B). Therefore, exposure to a given antigen very early in life results in acquisition of long-lasting tolerance. 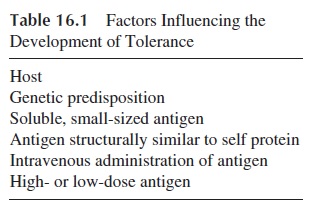 2.           Pharmacological Immunosuppression. An extension of the concept that an im-munoincompetent host is predisposed to develop tolerance led to experiments that demonstrated that tolerance can be achieved in animals whose degree of im-mune competence is artificially lowered (e.g., by drug-induced immunosuppres-sion). This is the basic rationale for the use of immunosuppressive drugs in or-gan transplantation.

3.           General structure and configuration of the antigen. An antigen that induces tol-erance is termed a tolerogen. Size and molecular complexity are among the most important factors determining whether a substance is antigenic or tolerogenic. For example, the response of the immune system to the injection of aggregates versus soluble monomers of a given protein is drastically different. When the ag-gregated protein is injected, an active immune response is elicited. If, instead, all protein aggregates are removed from the suspension by high-speed centrifuga-tion and only soluble protein monomers are injected, it is easier to achieve a state of tolerance.

Large or complex antigens are usually not tolerogenic because they are phagocytosed and processed by macrophages, creating optimal conditions for stimulation of an immune response. In contrast, small, soluble antigens may not be taken up by the macrophages and thus fail to be adequately presented to helper T cells. The resulting lack of co-stimulation signals will favor the development of tolerance.

Exceptions to these rules have been noted. Some autoantigen-derived pep-tides have been used to induce tolerance in laboratory animals. It is possible that such peptides are able to bind directly to MHC-II molecules and may deliver tolerogenic signals to T lymphocytes with the corresponding autoreactive TcR.

4.           Degree of structural homology. Antigens with a high degree of structural ho-mology with endogenous proteins of the animal into whom they are injected are more likely to induce tolerance. For example, tolerance to human immunoglob-ulins should be easier to induce in primates than in rodents, since the primary structure of human and primate immunoglobulins is considerably more similar than the primary structure of human and rodent immunoglobulins.

5.           Degree of immunogenicity. The immunogenicity of a given antigen is the resultof several factors, some antigen-related (such as the degree of structural homol-ogy with host proteins and the chemical complexity of the antigen, discussed above), and some related to the genetic constitution of the animal. Some antigens are strongly immunogenic in a given species or strain and not in another. It is ex-tremely difficult or impossible to induce tolerance against a strong immunogen.

6.           Route of antigen administration. Tolerance is achieved more easily when anti-gens are injected intravenously rather than intramuscularly or subcutaneously, probably as a result of dilution in the systemic circulation.

Weigle and coworkers induced tolerance with a single dose of aggregate-free human gamma globulin (HAGG) and followed longitudinally the ability of various combinations of T and B lymphocytes of the tolerized animals and normal controls to reconstitute the immune response in sublethally irradiated mice (Fig. 16.1). T-cell unresponsiveness developed after 1–2 days and lasted over 49 days, while B-cell unresponsiveness was obvious only after more than a week from the time of injection |of HAGG and was of shorter duration, since by day 49 the B cells of the injected animals had recovered their ability to respond to an HAGG challenge. These studies are the basis for the concept that the physiological state of tolerance of nondeleted self-reactive clones results from the establishment of low-zone, long-lasting T-cell tolerance. 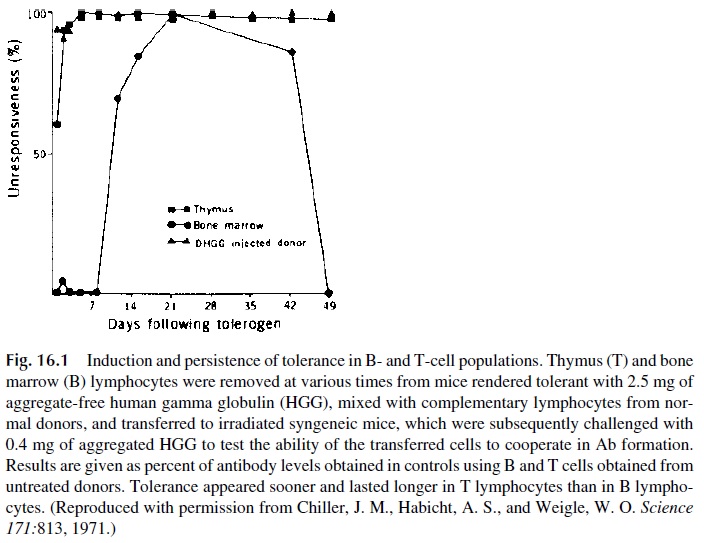