Pathogenic Factors Involved in the Onset of Autoimmune Diseases

Multiple factors have been proposed as participating in the pathogenesis of autoimmune diseases.

Pathogenic Factors Involved in the Onset of Autoimmune Diseases

Multiple factors have been proposed as participating in the pathogenesis of autoimmune diseases. These factors can be classified as immunological, genetic, environmental, and hormonal. Each group of factors is believed to contribute in different ways to the patho-genesis of different diseases.

Multiple lymphocyte abnormalities have been described in patients with autoimmune dis-eases. Prominent among them are B-lymphocyte overactivity, presence of spontaneously activated T and B lymphocytes, and decreased suppressor T-cell function.

These antibodies may play an important role in autoimmunity. For example, during a nor-mal immune response to a virus, an immune response directed against the viral structures mediating attachment to its target cell is likely to be triggered. As the immune response evolves, anti-idiotypic antibodies reacting with the antigen-binding site of the antiviral an-tibodies may develop. These anti-idiotypes, by recognizing the “internal image of the anti-gen” (which is the configuration of the binding site of the first antibody), may be able to combine with the virus receptor protein in the cell. If the membrane protein used as bind-ing site by the virus happens to be a receptor with important physiological functions, the synthesis of anti-idiotypic antibodies may have adverse effects by either activating or blocking the physiological activation of these functions.

Such a mechanism could explain the origin of antibodies against the acetylcholine and the TSH receptors detected in myasthenia gravis and Grave’s disease, respectively. A hypothetical viral infection would trigger the synthesis of anti-idiotypic antibodies cross-reacting with the acetylcholine receptor at the neuromuscular junction or with the TSH re-ceptor on thyroid cells; these antibodies could interfere with normal function, cause cell death, or induce cell stimulation depending upon their isotype and the receptor epitopes to which they bind.

Clinical observations have documented increased frequency of autoimmune diseases in families and increased rates of clinical concordance in monozygotic twins. Several studies have also documented associations between HLA antigens and various diseases. As stated earlier, autoimmune diseases can be classified in two groups: one apparently associated with MHC-I genetic markers, and the other associated with MHC-II genetic markers.

The classical example of linkage with MHC-I markers is the association between HLA-B27 and inflammatory spondyloarthropathies (ankylosing spondylitis, Reiter’s syn-drome, etc.). The pathogenic relevance of HLA-B27 is strongly supported by experiments with transgenic mice carrying the gene for HLA-B27. Those transgenic animals sponta-neously develop inflammatory disease involving the gastrointestinal tract, peripheral and vertebral joints, skin, nails, and heart. The disease induced in transgenic mice resembles strikingly the B27-associated disorders that afflict humans with that gene. It has been pos-tulated that the autoimmune reaction is triggered by an infectious peptide presented by HLA-B27 and followed by cross-reactive lymphocyte activation by an endogenous colla-gen-derived peptide, equally associated with HLA-B27.

The linkage of autoimmunity with MHC-II markers is better understood. With the ex-panded definition of MHC-II alleles due to the development of antisera and DNA probes and because of the successful sequencing of the genes coding for the constitutive polypep-tide chains of MHC-II molecules, the significance of MHC-II alelles has become clear. For example, insulin-dependent diabetes mellitus (IDDM) is strongly associated with serolog-ically defined MHC-II markers (HLA-DR3 and HLA-DR4) but is even more strongly cor-related with the presence of uncharged amino acids at position 57 of the chain of DQ (DQB) . Those MHC-II molecules may be critically involved in the pre-sentation of diabetogenic peptides to the immune system.

The exact mechanisms responsible the association between HLA alleles and disease susceptibility are being actively investigated. Two have been hypothesized, based on the persistence and later activation of autoreactive clones:

1.           Molecular mimicry, i.e., cross-reactivity between peptides derived from infec-tious agents and peptides derived from autologous proteins which are expressed by most normal resting cells in the organism. Anergic autoreactive T-cell clones would be activated by an immune response against an infectious agent due to this type of cross-reactivity.

2.           Lack of expression of MHC alleles able to bind critical endogenous peptides. Under these circumstances potentially autoreactive T-lymphocyte clones would not be eliminated and would remain available for later activation due to an unre-lated immune response or by the presentation of a cross-reactive peptide.

Another important genetic determinant of autoreactivity is the TcR repertoire of a given individual. Several autoimmune diseases show associations with specific TcR vari-able-region types. This is not surprising because the specific recognition of different oligopeptides by different T lymphocytes depends on the diversity of the TcR. Therefore, the development of an autoimmune response should require that the genome of an individual includes genes encoding a particular array of V region genes whose transcription resulted in the expression of TcR able to combine with a specific au-tologous peptide. In addition, the clones expressing such receptors must not be deleted dur-ing embryonic differentiation.

These postulates are supported by immunogenetic studies in different animals and humans with different manifestations of autoimmunity. Those studies suggest that linkages between specific TcR V-region genes and specific autoimmune diseases may actually ex-ist (e.g., IDDM, multiple sclerosis, and SLE). Experimental corollaries of the postulated positive association between specific TcR V-region genes and disease are found in exper-imental allergic encephalomyelitis and murine collagen-induced arthritis. The lymphocytes obtained from arthritic joints of mice susceptible to collagen-induced arthritis have a very limited repertoire of Vβgenes. In mouse strains that do not develop collagen-induced arthritis there are extensive deletion of Vβ genes, including those preferentially expressed by susceptible mice.

Even in identical twins, however, concordance for a particular autoimmune disease never exceeds 40%, suggesting that the presence of autoimmunity-associated TcR V-region genes is not sufficient to cause disease by itself. Indeed, with certain exceptions, hu-man autoimmune diseases are multigenic and the number of the involved genes has not been determined. Recent studies have undertaken genome-wide searches to locate loci and genes that are involved in humans with systemic autoimmune diseases and the corre-sponding animal models. The studies use microsatellite markers and patients from families with multiple afflicted members. Progress has been made, but definitive results are not yet available.

In mice that develop a disease resembling SLE at least 31 different genes contribut-ing to the development of the disease have been identified so far. Study of congenic mice has shed some light into how different loci contribute, through positive and negative epistatic interactions, to loss of tolerance to autoantigens and the progressive establishment of a lupus-like disease. The number of genes involved in human lupus must be significantly higher. A similarly high number of loci have been proposed for diabetes and arthritis in hu-mans and laboratory animals.

The most important environmental factors are believed to be foreign antigens sharing struc-tural similarity with self-determinants. Exposure to these epitopes can trigger autoimmune reactions. The term molecular mimicry is used to describe identity or similarity of either amino acid sequences or structural epitopes between foreign and self antigens.

One of the best known examples of autoimmunity resulting from the exposure to cross-reactive antigens is the cardiomyopathy that complicates many cases of acute rheumatic fever. Group A β-hemolytic streptococci have several epitopes cross-reactive with tissue antigens. One of them cross-reacts with an antigen found in cardiac myosin. The normal immune response to such a cross-reactive strain of Streptococcus will generate lym-phocyte clones that will react with myosin and induce myocardial damage long after the in-fection has been eliminated.

Several other examples of molecular mimicry have been described, as summarized in Table 16.9, and additional ones await better definition. For example, molecular mimicry between the envelope glycolipids of gram-negative bacteria and the myelin of the periph-eral nerves may explain the association of the Gullain-Barré syndrome with Campylobacter jejuni infections. 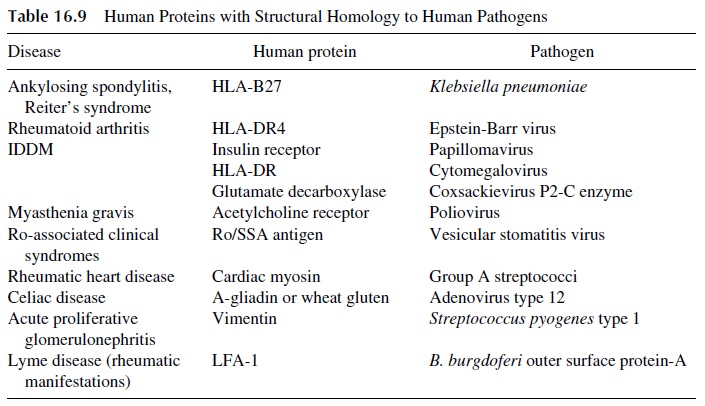 Mimicry between LFA-1 and the Borrelia burgdorferi outer surfaceprotein A is considered responsible for the rheumatic manifestations of Lyme’s disease. Mimicry between glutamate decarboxylase, an enzyme concentrated in pancreatic βcells, and coxsackievirus P2-C, an enzyme involved in the replication of coxsackievirus B, has been considered responsible for the development of insulin-dependent diabetes in humans and in murine models of this disease.

Infectious agents, particularly viruses, can precipitate autoimmunity by inducing the release of sequestered antigens. In autoimmune myocarditis, associated with coxsackie B3 virus, the apparent role of the virus is to cause the release of normally sequestered intra-cellular antigens as a consequence of virus-induced myocardial cell necrosis. Autoanti-bodies and T lymphocytes reactive with sarcolemma and myofibril antigens or peptides de-rived from these antigens emerge, and the autoreactive T lymphocytes are believed to be responsible for the development of persistent myocarditis.

On the other hand, latent viral infections are believed to be responsible for the de-velopment of many autoimmune disorders. Latent infection is commonly associated with integration of the viral genome into the host chromosomes, and while integrated viruses very seldom enter a full replicative cycle and do not cause cytotoxicity, they can inter-fere, directly or indirectly, with several functions of the infected cells. For example, vi-ral proteins may interfere with the function of proteins involved in the control of cell death and survival, such as p53 and bcl-2. In addition, viral proteins may mimic chemokine receptors or ligands and therefore mislead the function of immune cells. T-cell activation secondary to an in apparent viral infection has the potential to in-duce autoimmunity secondary to the release of interferon-γ and TNF, both known to be potent inducers of MHC-II antigen expression. The increased expression of class II MHC antigens would then create optimal conditions for the onset of an autoimmune response directed against MHC-II–self peptide complexes. Such a mechanism has been proposed to explain the onset of autoimmune thyroiditis. An unknown nonlytic virus would cause T-lymphocyte activation in the thyroid gland, followed by increased expression of MHC-II and thyroid-derived peptides, and finally, an antithyroid immune reaction would develop.

Finally, physical trauma can also lead to immune responses to sequestered antigens. The classical example is sympathetic ophthalmia, an inflammatory process of apparent au-toimmune etiology affecting the normal eye after a penetrating injury of the other. This pro-cess may not be limited to trauma; tissue injury induced by any cause may result in the gen-eration of autoreactive T cells that recognize previously cryptic epitopes. Over time, this process will lead to expansion of the immune response by facilitating the onset of immune responses to additional epitopes. This process is known as “epitope spreading.”

There are still difficulties in proving that infections are the cause of autoimmune diseases. The infection may have resolved long before the appearance of disease or the infection may be in apparent, thus obscuring the temporal association between infection and au-toimmunity. Alternatively, molecular mimicry may be the result rather than the cause of autoimmunity. The infectious process may result in the alteration of nonimmunogenic antigenic determinants as a consequence of tissue injury. The autoantibodies that appear when the disease is diagnosed may then be the result of tissue injury rather than the cause of it.