The autoimmune pathological process may be initiated and/or perpetuated by autoantibod-ies, immune complexes containing autoantigens, and autoreactive T lymphocytes.

The autoimmune pathological process may be initiated and/or perpetuated by autoantibod-ies, immune complexes containing autoantigens, and autoreactive T lymphocytes. Each of these immune processes plays a preponderant role in certain diseases or may be synergis-tically associated, particularly in multiorgan, systemic autoimmune diseases.

1. The Role of Autoantibodies in Autoimmune Diseases

B lymphocytes with autoreactive specificities remain nondeleted in the adult individuals of many species. In mice, polyclonal activation with lipopolysaccharide leads to production of autoantibodies. In humans, bacterial and viral infections (particularly chronic) may lead to the production of anti-immunoglobulin and antinuclear antibodies. In general, it is ac-cepted that polyclonal B-cell activation may be associated with the activation of autoreac-tive B lymphocytes.

·              Antibodies with high affinity for the antigen are considered to be more pathogenic because they form stable IC that can activate complement more effectively.

Autoantibodies may be directly involved in the pathogenesis of some diseases, while in others may serve simply as disease markers without a known pathogenic role. For ex-ample, the anti-Sm antibodies found exclusively in patients with SLE are not known to play a pathogenic role. However, in many other situations autoantibodies can trigger various pathogenic mechanisms leading to cell or tissue destruction (Table 16.6). 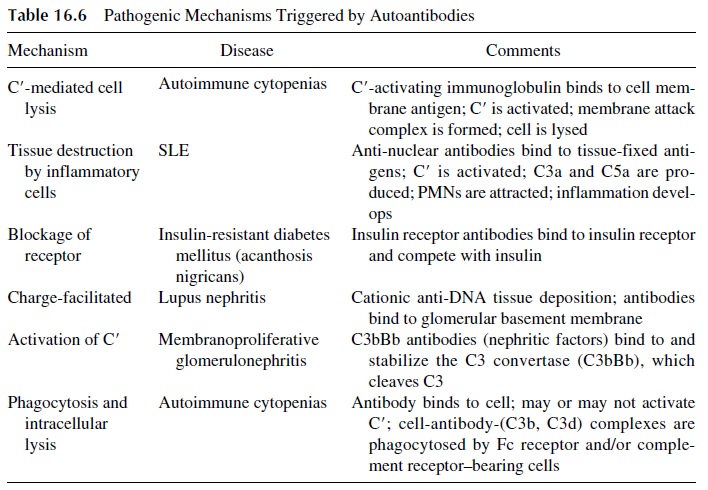 ·              Complement-fixing antibodies (IgG and IgM) to red cells may cause intravascular red cell lysis if the complement activation sequence proceeds all the way to the formation of the membrane attack complex or may induce phagocytosis and extravascular lysis if the sequence is stopped at the C3 level, due to the accu-mulation of C3b fragments on the red cell membrane.

·              If the antigen-antibody reaction takes place in tissues, pro-inflammatory complement fragments (C3a, C5a) are generated and attract granulocytes and mononuclear cells, which can release proteolytic enzymes and toxic radicals in the area of IC deposition, causing tissue damage.

·              Other autoantibodies may have a pathogenic role dependent not on causing cell or tis-sue damage, but on interference with cell functions resulting from their bind-ing to physiologically important cell receptors.

Representative human autoimmune diseases in which auto-antibodies are believed to play a major pathogenic role are listed in Table 16.7. It must be noted in some of these dis-eases there is also a cell-mediated immunity component. For example, in myasthenia gravis, autoreactive T lymphocytes have been described, and both autoreactive cell lines and clones have been successfully established from patient’s lymphocytes. These T lym-phocytes may provide help to autoreactive B lymphocytes producing anti-acetylcholine re-ceptor antibodies. In such cases, autoreactive T lymphocytes could be more central in the pathogenesis of the disease than auto-antibody producing B lymphocytes. However, the pathogenic role of autoantibodies is evident from the fact that newborns to mothers with myasthenia gravis develop myasthenia-like symptoms for as long as they have maternal au-toantibodies in circulation.

2. The Pathogenic Role of Immune Complexes in Autoimmune Diseases

In autoimmune diseases, there is ample opportunity for the formation of immune complexes (IC) involving autoantibodies and self antigens. Several factors determine the pathogenic-ity of IC. They include the size of the IC (inter-mediate-size IC are the most pathogenic), the ability of the host to clear IC (individuals with low complement levels or deficient Fc receptor and/or complement receptor function have delayed IC clearance rates and are prone to develop autoimmune diseases), and physico-chemical properties of IC (which determine the ability to activate complement and/or the deposition in specific tissues). In many occasions, IC are formed in situ, activate the com-plement system, complement split products are formed, and neutrophils are attracted to the area of IC deposition where they will mediate the IC-mediated tissue destruction.

SLE and polyarteritis nodosa are two classical examples of autoimmune diseases in which IC play a major pathogenic role. In SLE, DNA and other nuclear antigens are pre-dominantly involved in the formation of IC, while in polyarteritis nodosa, the most fre-quently identified antigen is hepatitis B surface antigen.

3. The Role of Activated T Lymphocytes in the Pathogenesis of Autoimmune

·              Recognize foreign antigen associated with self determinants (modified self)

·              Respond to foreign antigens but still induce self tissue destruction.

Cytotoxic CD8+ lymphocytes play a pathogenic role in some autoimmune diseases, usually involving the recognition of nonself peptides expressed in the context of self MHC and destroying the cell expressing such “modified” self. For example, coxsackie B virus–defined antigens expressed on the surface of myocardial cells may induce CD8+ -me-diated tissue destruction, causing a virus-induced autoimmune myocarditis.