Our understanding of autoimmune disease has been facilitated by studies in animal models. 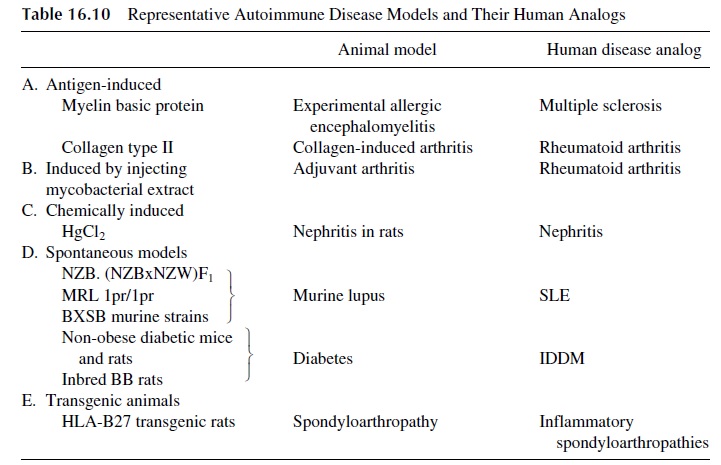 Experimental allergic encephalomyelitis (EAE) in mice and rats is the best characterized experimental model of organ-specific autoimmune disease. Immunizing animals with myelin basic protein and adjuvant induces the disease. One to 2 weeks later, the animals develop encephalomyelitis characterized by perivascular mononuclear cell infiltrates and demyelination. The mononuclear cell infiltrates show a predominance of CD4+ helper T lymphocytes, which upon activation release cytokines that attract phagocytic cells to the area of immunological reaction; those cells are, in turn, activated and release enzymes re-sponsible for the demyelination. CD4+ T-lymphocyte clones from animals with EAE dis-ease can transfer the disease to normal animals of the same strain. Genetic manipulations leading to deletion of the genes coding for two specific variable regions of the TcR β chain (Vβ8 and Vβ13) prevent the expression of disease. These two Vβ regions must obviously be involved in the recognition of a dominant epitope of human myelin.

Diabetes develops spontaneously in inbred BB rats, as well as in nonobese diabetic (NOD) mice. In both strains the onset of the disease is characterized by T-cell–mediated insulitis, which evolves into diabetes. This disease demonstrates H-2 linkage remarkably similar to that observed between human IDDM and HLA-DR3, DR4, and other MHC-II alleles. In NOD mice, a decreased expression of MHC-I genes, secondary to a TAP-1 gene defi-ciency, has been recently characterized. Such a deficiency would prevent these animals from deleting autoreactive clones during T-cell differentiation.

·              BXSB mice develop anti-DNA antibodies, nephritis, and vasculitis. In this strain, in contrast to the others, disease susceptibility is linked to the Y chromosome.