When planning the synthesis of an aromatic compound, it is best to work backwards from the product in simple stages (retrosynthesis). If the sub-stituent present cannot be added directly to the aromatic ring, it is best to consider what functional group could be transformed to give the desired substituent.

Some substituents cannot be introduced directly onto an aromatic ring by elec-trophilic substitution. These include the following groups: –NH2, –NHR, NR2, NHCOCH3, CO2H, CN, OH. Although these groups cannot be added directly onto the aromatic ring they can be obtained by transforming a functional group which can be applied directly by electrophilic substitution. Three of the most importanttransformations are shown (Fig. 1). 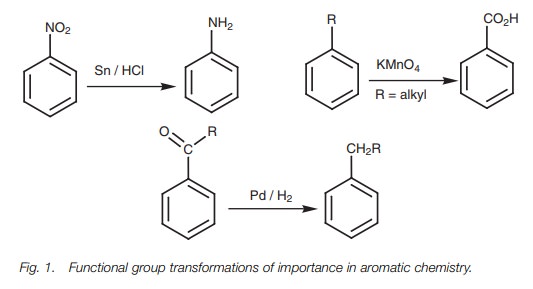 Nitro, alkyl, and acyl groups can readily be added by electrophilic substitution and can then be converted to amino, carboxylic acid, and alkyl groups respec-tively. Once the amino and carboxylic acid groups have been obtained, they can be further converted to a large range of other functional groups such as secondary and tertiary amines, amides, diazonium salts, halides, nitriles, esters, phenols, alcohols, and ethers.

A knowledge of the electrophilic substitutions and functional group transforma-tions which are possible is essential in planning the synthesis of an aromatic com-pound. When designing such a synthesis, it is best to work backwards from the product and to ask what it could have been synthesized from – a process called retrosynthesis. We can illustrate this by designing a synthesis of an aromatic ester(Fig. 2). An ester functional group cannot be attached directly by electrophilic sub-stitution, so the synthesis must involve several steps. The usual way to make an ester is from an acid chloride which is synthesized in turn from a carboxylic acid. Alternatively, the ester can be made directly from the carboxylic acid by treating it with an alcohol and an acid catalyst. Either way, benzoic acid is required to synthesize the ester. Carboxylic acids cannot be added directly to aromatic rings either, so we have to look for a different functional group which can be added directly, then transformed to a carboxylic acid. A carboxylic acid group can be obtained from the oxidation of a methyl group. Methyl groups can be added directly by Friedel–Crafts alkylation. Therefore a possible synthetic route would be as shown in Fig. 2.

One possible problem with this route is the possibility of poly-methylation in the first step. This is likely since the product (toluene) will be more reactive than the starting material (benzene). One way round this problem would be to use an excess of benzene. 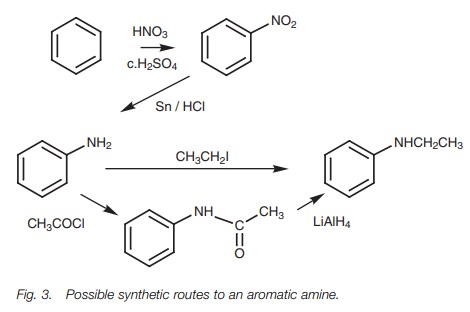 Note that there are two methods of converting aniline (PhNH2) to the final product. Alkylation is the direct method, but sometimes acylation followed by reduction gives better yields, despite the extra step. This is because it is sometimes difficult to control the alkylation to only one alkyl group.

As our last example, we shall consider the synthesis of an aromatic ether (Fig.4). Here an ethoxy group is attached to the aromatic ring. The ethoxy group can-not be applied directly to an aromatic ring, so we have to find a way of obtaining it from another functional group. Alkylation of a phenol group would give the desired ether, but a phenol group cannot be applied directly to the ring either. However, we can obtain the phenol from an amino group, which in turn can be obtained from a nitro group. The nitro group can be applied directly to the ring and so the synthesis involves a nitration, reduction, conversion of the amino group to a diazonium salt, hydrolysis, and finally an alkylation. 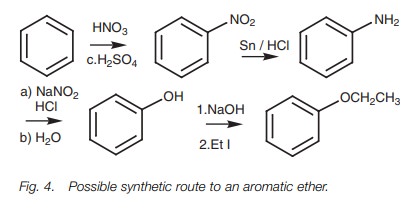