Synthesis of di- and tri-substituted benzenes

When planning the synthesis of a di substituted benzene, it is important to consider the directing properties of the two substituents.

SYNTHESIS OF DI- AND TRI-SUBSTITUTED BENZENES

A full understanding of how substituents direct further substitution is crucial in planning the synthesis of a di substituted aromatic compound. For example, there are two choices which can be made in attempting the synthesis of p-bromonitrobenzene from benzene (Fig. 1). We could brominate first then nitrate, or nitrate first then brominate. A knowledge of how substituents affect elec-trophilic substitution allows us to choose the most suitable route.

In the first method, nitrating first then brominating would give predominantly the meta isomer of the final product due to the meta directing properties of the nitro group. The second method is better since the directing properties of bromine are in our favor. Admittedly, we would have to separate the para product from the ortho product, but we would still get a higher yield by this route.

The synthesis of m-toluidine requires a little more thought (Fig. 2). Both the methyl and the amino substituents are activating groups and direct ortho/para. However, the two substituents are meta with respect to each other. In order to get metasubstitution we need to introduce a substituent other than the methyl or nitrogroup which will direct the second substitution to the meta position. Moreover, once that has been achieved, the meta directing substituent has to be converted to one of the desired substituents. The nitro group is ideal for this since it directs meta and can then be converted to the required amino group.

This same strategy can be used for a large range of meta-disubstituted aromatic rings where both substituents are ortho/para directing since the nitro group can be transformed to an amino group which can then be transformed to a large range of different functional groups. Another tricky situation is where there are two meta-directing substituents at ortho or para positions with respect to each other, for example, p-nitrobenzoic acid (Fig. 3). In this case, a methyl substituent is added which is o/p directing. Nitration is then carried out and the para isomer is separated from any ortho isomer which might be formed. The methylgroup can then be oxidized to the desired carboxylic acid.

Larger alkyl groups could be used to increase the ratio of para to ortho substitu-tion since they can all be oxidized down to the carboxylic acid.

It is sometimes useful to have a substituent present which can direct or block a particular substitution, and which can then be removed once the desired sub-stituents have been added. The reactions in Fig. 4 are used to remove substituents from aromatic rings.

An example of how removable substituents can be used is in the synthesis of 1,3,5-tribromobenzene (Fig. 5). This structure cannot be made directly from ben-zene by bromination. The bromine atoms are in the meta positions with respect to each other, but bromine atoms direct ortho/para. Moreover, bromine is a deactivating group and so it would be difficult to introduce three such groups directly to benzene.

This problem can be overcome by using a strong activating group which will direct ortho/para and which can then be removed at the end of the synthesis. The amino group is ideal for this and the full synthesis is shown in Fig. 5. 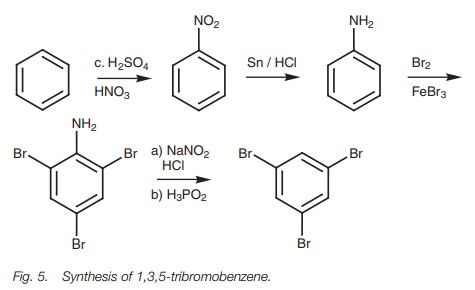 The synthesis of ortho-bromotoluene illustrates how a sulfonic acid can be used in a synthesis. o-Bromotoluene could conceivably be synthesized by bromination of toluene or by Friedel–Crafts alkylation of bromobenzene (Fig. 6). However, the reaction would also give the para-substitution product and this is more likely if the electrophile is hindered from approaching the ortho position by unfavorable steric interactions. An alternative strategy would be to deliberately substitute a group at the para position of toluene before carrying out the bromination. This group would then act as a blocking group at the para position and would force the bromi-nation to take place ortho to the methyl group. If the blocking group could then be removed, the desired product would be obtained. The sulfonic acid group is particularly useful in this respect since it can be easily removed at the end of the synthesis (Fig. 7). 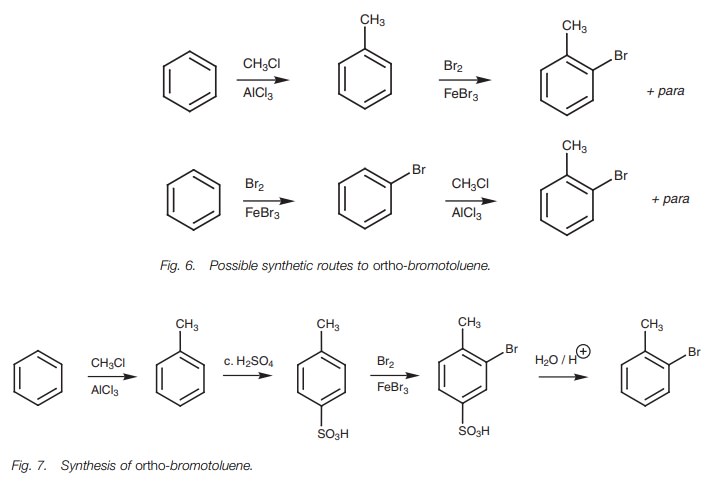