The adrenoceptor agonists have several pharmacologic actions that are important in the treatment of asthma.

BASIC PHARMACOLOGY OF AGENTS USED IN THE TREATMENT OF ASTHMA

The drugs most used for management of asthma are adrenoceptor agonists, or sympathomimetic agents (used as “relievers” or bron-chodilators) and inhaled corticosteroids (used as “controllers” or anti-inflammatory agents). Their basic pharmacology is presented elsewhere.

The adrenoceptor agonists have several pharmacologic actions that are important in the treatment of asthma. They relax airway smooth muscle and inhibit release of bronchoconstricting mediators from mast cells. They may also inhibit microvascular leakage and increase mucociliary transport by increasing ciliary activity. As in other tissues, the β agonists stimulate adenylyl cyclase and increase the formation of intracellular cAMP (Figure 20–3).

receptors relaxes airway smooth muscle, inhibits mediator release, and causes tachycardia and skeletal muscle tremor as side effects.The sympathomimetic agents that have been widely used in the treatment of asthma include epinephrine, ephedrine, isopro-terenol, and albuterol and other β2-selective agents (Figure 20–4). Because epinephrine and isoproterenol increase the rate and force of cardiac contraction (mediated mainly by β1 receptors), they are reserved for special situations . 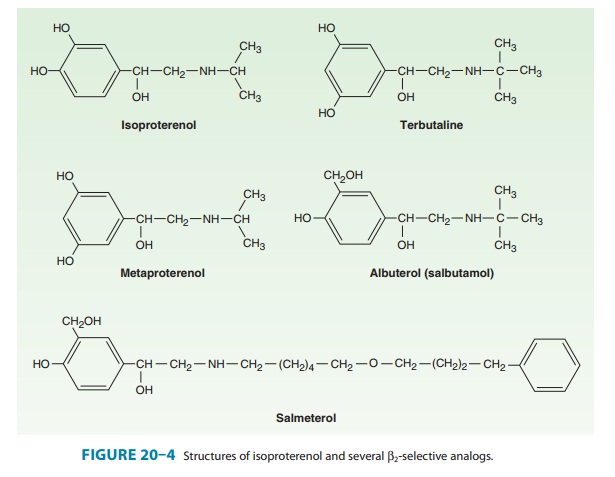 In general, adrenoceptor agonists are best delivered by inhala-tion because this results in the greatest local effect on airway smooth muscle with the least systemic toxicity. Aerosol deposi-tion depends on the particle size, the pattern of breathing, and the geometry of the airways. Even with particles in the optimal size range of 2–5 mm, 80–90% of the total dose of aerosol is deposited in the mouth or pharynx. Particles under 1–2 μm remain suspended and may be exhaled. Bronchial deposition of an aerosol is increased by slow inhalation of a nearly full breathand by more than 5 seconds of breath-holding at the end of inspiration.

Epinephrine is an effective, rapidly acting bronchodilatorwhen injected subcutaneously (0.4 mL of 1:1000 solution) or inhaled as a microaerosol from a pressurized canister (320 mcg per puff ). Maximal bronchodilation is achieved 15 minutes after inhalation and lasts 60–90 minutes. Because epinephrine stimu-lates α and β1 as well as β2 receptors, tachycardia, arrhythmias, and worsening of angina pectoris are troublesome adverse effects. The cardiovascular effects of epinephrine are of value for treating the acute vasodilation and shock as well as the bronchospasm of anaphylaxis, but its use in asthma has been displaced by other, more β2-selective agents. Ephedrine was used in China for more than 2000 years beforeits introduction into Western medicine in 1924. Compared with epinephrine, ephedrine has a longer duration, oral activity, more pronounced central effects, and much lower potency. Because of the development of more efficacious and β2-selective agonists, ephedrine is now used infrequently in treating asthma.

Isoproterenol is a potent bronchodilator; when inhaled as amicroaerosol from a pressurized canister, 80–120 mcg isopro-terenol causes maximal bronchodilation within 5 minutes. Isopro-terenol has a 60- to 90-minute duration of action. An increase in the asthma mortality rate that occurred in the United Kingdom in the mid-1960s was attributed to cardiac arrhythmias resulting  from the use of high doses of inhaled isoproterenol. It is now rarely used for asthma.

The β2-selective adrenoceptor agonist drugs, particularly albuterol, are the most widely used sympathomimetics for the treatment of the bronchoconstriction of asthma at present (Figure 20–4).

These agents differ structurally from epinephrine in having a larger substitution on the amino group and in the position of the hydroxyl groups on the aromatic ring. They are effective after inhaled or oral administration and have a long duration of action.

Albuterol, terbutaline, metaproterenol, and pirbuterol areavailable as metered-dose inhalers. Given by inhalation, these agents cause bronchodilation equivalent to that produced by iso-proterenol. Bronchodilation is maximal within 15–30 minutes and persists for 3–4 hours. All can be diluted in saline for admin-istration from a hand-held nebulizer. Because the particles gener-ated by a nebulizer are much larger than those from a metered-dose inhaler, much higher doses must be given (2.5–5.0 mg vs 100–400 mcg) but are no more effective. Nebulized therapy should thus be reserved for patients unable to coordinate inhala-tion from a metered-dose inhaler.Most preparations of β2-selective drugs are a mixture of R and S isomers. Only the R isomer activates theβ-agonist receptor.Reasoning that the S isomer may promote inflammation, a puri-fied preparation of the R isomer of albuterol has been developed (levalbuterol). Whether this actually presents significant advan-tages in clinical use is unproven.

Albuterol and terbutaline are also available in tablet form. One tablet two or three times daily is the usual regimen; the principal adverse effects of skeletal muscle tremor, nervousness, and occa-sional weakness may be reduced by starting the patient on half-strength tablets for the first 2 weeks of therapy. This route of administration presents no advantage over inhaled treatment and is thus rarely prescribed.

Of these agents, only terbutaline is available for subcutaneous injection (0.25 mg). The indications for this route are similar to those for subcutaneous epinephrine—severe asthma requiring emergency treatment when aerosolized therapy is not available or has been ineffective—but it should be remembered that terbuta-line’s longer duration of action means that cumulative effects may be seen after repeated injections.

A new generation of long-acting β2-selective agonists includes salmeterol (a partial agonist) and formoterol (a full agonist).Both drugs are potent selective β2 agonists that achieve their long duration of action (12 hours or more) as a result of high lipid solubility. This permits them to dissolve in the smooth muscle cell membrane in high concentrations or, possibly, attach to “moor-ing” molecules in the vicinity of the adrenoceptor. These drugs appear to interact with inhaled corticosteroids to improve asthma control. Because they have no anti-inflammatory action, they are not recommended as monotherapy for asthma. An ultra-long act-ing β agonist, indacaterol, is currently approved in Europe. It needs to be taken only once a day but is used only for the treat-ment of chronic obstructive pulmonary disease (COPD). Data on its efficacy and safety in management of asthma are lacking.

The use of sympathomimetic agents by inhalation at first raised fears about possible cardiac arrhythmias and about hypoxemia acutely and tachyphylaxis or tolerance when given repeatedly. It istrue that the vasodilating action of β2-agonist treatment may increase perfusion of poorly ventilated lung units, transiently decreasing arterial oxygen tension (PaO2). This effect is usually small, however, and may occur with any bronchodilator drug; the significance of such an effect depends on the initial PaO2 of the patient. Administration of supplemental oxygen, routine in treat-ment of an acute severe attack of asthma, eliminates any concern over this effect. The other concern, that customary doses of β-agonist treatment may cause lethal cardiac arrhythmias, appearsunsubstantiated. In patients presenting for emergency treatment of severe asthma, irregularities in cardiac rhythm improve with the improvements in gas exchange effected by bronchodilator treat-ment and oxygen administration.The concept that β-agonist drugs worsen clinical asthma by inducing tachyphylaxis to their own action has not been established. Most studies have shown only a small change in the bronchodilator response to β stimulation after prolonged treatment with β-agonist drugs, but some studies have shown a loss in the ability of β-agonist treatment to inhibit the response to subsequent chal-lenge with exercise, methacholine, or antigen challenge (referred to as a loss of bronchoprotective action).

Although it is true that β2-adrenoceptor agonists appear to be safe and effective bronchodilators when taken on an “as needed” basis for relief of symptoms, there is some evidence of risk of adverse effects from chronic treatment with long-acting β ago-nists. These risks were suspected to be greater for individuals carrying a genetic variant for the β receptor, specifically at the B-16 locus of the β receptor. Retrospective analyses of studies of regular treatment with an inhaled β agonist suggested that asthma control deteriorated among patients homozygous for arginine at this locus, a genotype found in 16% of the Caucasian population and more commonly in African Americans in the USA. It was thus tempting to speculate that a genetic variant may underlie the report of an increase in asthma mortality from regular use of a long-acting β agonist in studies involving very large numbers of patients , but it should be noted that only trivial differences were observed in multiple measures of asthma control in a study comparing patients with the Arg/ Arg or Gly/Gly genotypes treated with salmeterol in combina-tion with an inhaled corticosteroid. While studies so far have failed to prove that genetic variations at this particular site in the gene for the β receptor are related to adverse responses to pro-longed β-agonist treatment, pharmacogenetic studies of asthma treatment will continue to be an active focus of research, as an approach to the development of “personalized therapy” for asthma and other diseases.