Home | | Pharmacology | Leukotriene Pathway Inhibitors - Basic Pharmacology of Agents Used in the Treatment of Asthma
Posted On :  21.09.2017 01:26 am

Because of the evidence of leukotriene involvement in many inflammatory diseases and in anaphylaxis, consid-erable effort has been expended on the development of drugs that block the synthesis of these arachidonic acid derivatives or their receptors.

Because of the evidence of leukotriene involvement in many inflammatory diseases  and in anaphylaxis, consid-erable effort has been expended on the development of drugs that block the synthesis of these arachidonic acid derivatives or their receptors. Leukotrienes result from the action of 5-lipoxygenase on arachidonic acid and are synthesized by a variety of inflammatory cells in the airways, including eosinophils, mast cells, macrophages, and basophils. Leukotriene B4 (LTB4) is a potent neutrophil chemoattractant, and LTC4 and LTD4 exert many effects known to occur in asthma, including bronchoconstriction, increased bron-chial reactivity, mucosal edema, and mucus hypersecretion. Early studies established that antigen challenge of sensitized human lung tissue results in the generation of leukotrienes, whereas other stud-ies of human subjects have shown that inhalation of leukotrienes causes not only bronchoconstriction but also an increase in bron-chial reactivity to histamine that persists for several days.

Two approaches to interrupting the leukotriene pathway have been pursued: inhibition of 5-lipoxygenase, thereby preventing leukotriene synthesis; and inhibition of the binding of LTD4 to its receptor on target tissues, thereby preventing its action. Efficacy in blocking airway responses to exercise and to antigen challenge has been shown for drugs in both categories: zileuton, a 5-lipoxygenase inhibitor, and zafirlukast and montelukast, LTD4-receptor antagonists. All have been shown to improve asthma control and to reduce the frequency of asthma exacerbations in outpatient clinical trials. Their effects on symptoms, airway caliber, bronchial reactivity, and airway inflammation are less marked than the effects of inhaled corticosteroids, but they are more nearly equal in reducing the frequency of exacerbations. Their principal advan-tage is that they are taken orally; some patients—especially chil-dren—comply poorly with inhaled therapies. Montelukast is approved for children as young as 6 years of age. 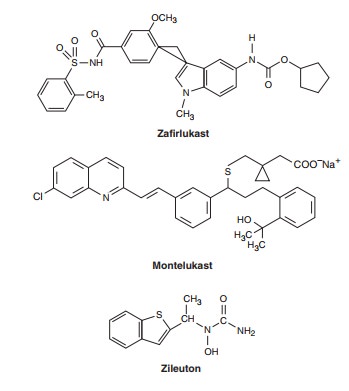 Some patients appear to have particularly favorable responses, but no clinical features allow identification of “responders” before a trial of therapy. In the USA, zileuton is approved for use in an oral dosage of 1200 mg of the sustained-release form twice daily; zafirlukast, 20 mg twice daily; and montelukast, 10 mg (for adults) or 4 mg (for children) once daily.

Trials with leukotriene inhibitors have demonstrated an important role for leukotrienes in aspirin-induced asthma. It has long been known that 5–10% of asthmatics are exquisitely sensi-tive to aspirin, so that ingestion of even a very small dose causes profound bronchoconstriction and symptoms of systemic release of histamine, such as flushing and abdominal cramping. Because this reaction to aspirin is not associated with any evidence of allergic sensitization to aspirin or its metabolites and because it is produced by any of the nonsteroidal anti-inflammatory agents, it is thought to result from inhibition of prostaglandin synthetase (cyclooxygenase), shifting arachidonic acid metabolism from the prostaglandin to the leukotriene pathway. Support for this idea was provided by the demonstration that leukotriene pathway inhibitors impressively reduce the response to aspirin challenge and improve overall control of asthma on a day-to-day basis.

Of these agents, zileuton is the least prescribed because of reports of liver toxicity. The receptor antagonists appear to have little toxicity. Reports of Churg-Strauss syndrome (a systemic vasculitis accompanied by worsening asthma, pulmonary infil-trates, and eosinophilia) appear to have been coincidental, with the syndrome unmasked by the reduction in prednisone dosage made possible by the addition of zafirlukast or montelukast. Of these two, montelukast is the most prescribed, probably because it can be taken without regard to meals, and because of the conve-nience of once-daily treatment.