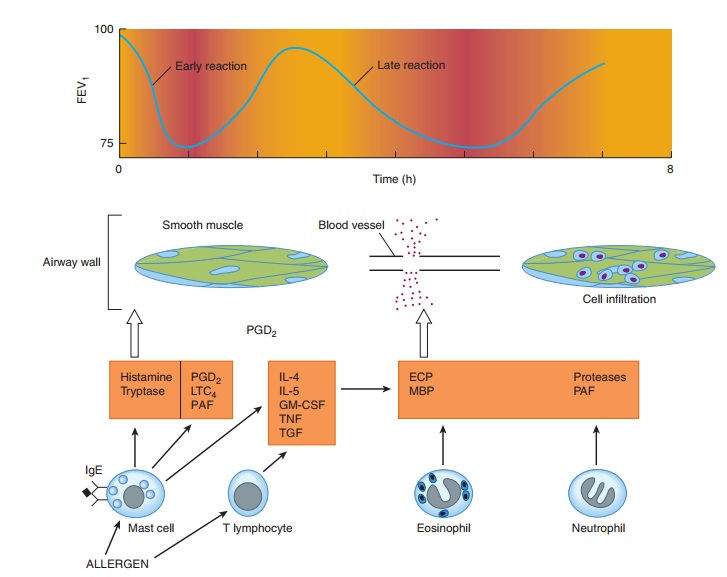 The classic immunologic model of asthma presents it as a disease mediated by reaginic immune globulin (IgE).

The classic immunologic model of asthma presents it as a disease mediated by reaginic immune globulin (IgE). Foreign materials that provoke IgE production are described as “allergens”; the most common are proteins from house dust mite, cockroach, animal danders, molds, and pollens. The tendency to produce IgE antibodies is genetically determined; asthma and other aller-gic diseases cluster in families. Once produced, IgE antibodies bind to mast cells in the airway mucosa (Figure 20–1). On reexposure to a specific allergen, antigen-antibody interaction on the surface of the mast cells triggers both the release of mediators stored in the cells’ granules and the synthesis and release of other mediators. The histamine, tryptase, leukotrienes C 4 and D4, and prostaglandin D2 that are released diffuse through the airway mucosa, triggering the muscle contraction and vascular leakage responsible for the acute bronchoconstriction of the “early asth-matic response.” This response is often followed in 3–6 hours by 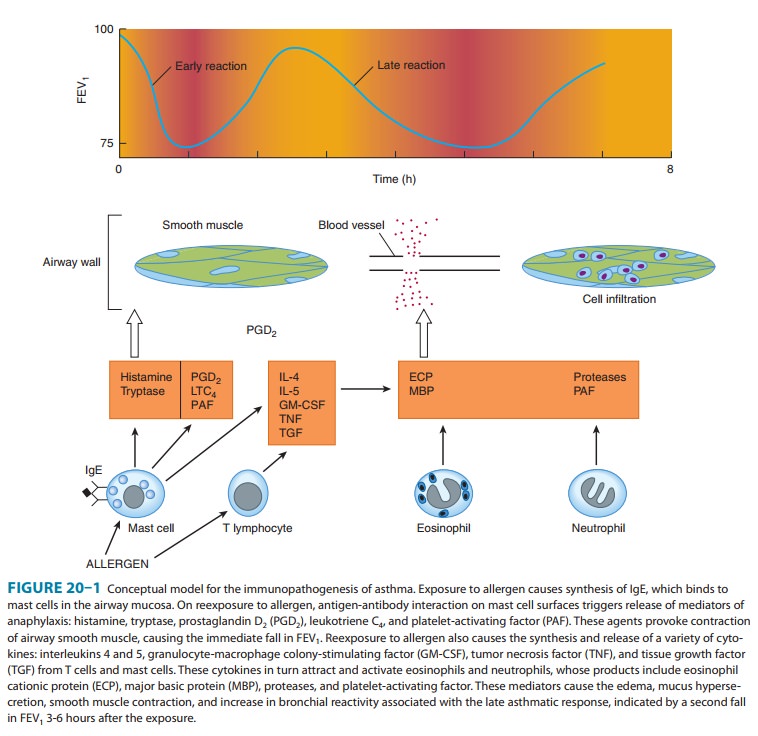 a second, more sustained phase of bronchoconstriction, the “late asthmatic response,” which is associated with an influx of inflam-matory cells into the bronchial mucosa and with an increase in bronchial reactivity that may last for several weeks after a single inhalation of allergen. The mediators responsible for this late response are thought to be cytokines characteristically produced by TH2 lymphocytes, especially interleukins 5, 9, and 13. These cytokines are thought to attract and activate eosinophils, stimu-late IgE production by B lymphocytes, and stimulate mucus production by bronchial epithelial cells. It is not clear whether lymphocytes or mast cells in the airway mucosa are the primary source of the mediators responsible for the late inflammatory response, but the benefits of corticosteroid therapy are attributed to their inhibition of the production of pro-inflammatory cyto-kines in the airways.

The allergen challenge model does not reproduce all the fea-tures of asthma. Most asthma attacks are not triggered by inhala-tion of allergens. They are triggered by viral respiratory infection. Some adults with asthma have no evidence of allergic sensitivity to allergens, and even in people with allergic sensitivity, the severity of symptoms correlates poorly with levels of allergen in the atmo-sphere. Moreover, bronchospasm can be provoked by nonaller-genic stimuli such as distilled water, exercise, cold air, sulfur dioxide, and rapid respiratory maneuvers.

This tendency to develop bronchospasm on encountering stimuli that do not affect healthy nonasthmatic airways is charac-teristic of asthma and is sometimes called “nonspecific bronchial hyperreactivity” to distinguish it from bronchial responsiveness to specific antigens. Bronchial reactivity is assessed by measuring the fall in forced expiratory volume in 1 second (FEV1) provoked by inhaling serially increasing concentrations of aerosolized metha-choline. The exaggerated reactivity of the airways appears to be fundamental to asthma’s pathogenesis, because it is nearly ubiqui-tous in patients with asthma and its degree roughly correlates with the clinical severity of the disease.

The mechanisms underlying bronchial hyperreactivity are somehow related to inflammation of the airway mucosa. The agents that increase bronchial reactivity, such as ozone exposure, allergen inhalation, and infection with respiratory viruses, also cause airway inflammation. The increase in reactivity due to aller-gen inhalation is associated with an increase in both eosinophils and polymorphonuclear leukocytes in bronchial lavage fluid. The increase in reactivity that is associated with the late asthmatic response to allergen inhalation (Figure 20–1) is sustained and, because it is prevented by treatment with an inhaled corticoster-oid, is thought to be caused by airway inflammation.

Whatever the mechanisms responsible for bronchial hyperreac-tivity, bronchoconstriction itself seems to result not simply from the direct effect of the released mediators but also from their acti-vation of neural or humoral pathways. Evidence for the impor-tance of neural pathways stems largely from studies of laboratory animals. The bronchospasm provoked in dogs by inhalation of histamine is reduced by pretreatment with an inhaled topical anesthetic agent, by transection of the vagus nerves, and by pre-treatment with atropine. Studies of asthmatic humans, however, have shown that treatment with atropine causes only a reduction

in—not abolition of—the bronchospastic responses to antigens and to nonantigenic stimuli. It is possible that activity in another neural pathway, such as the nonadrenergic, noncholinergic sys-tem, contributes to bronchomotor responses to stimuli (Figure 20–2). 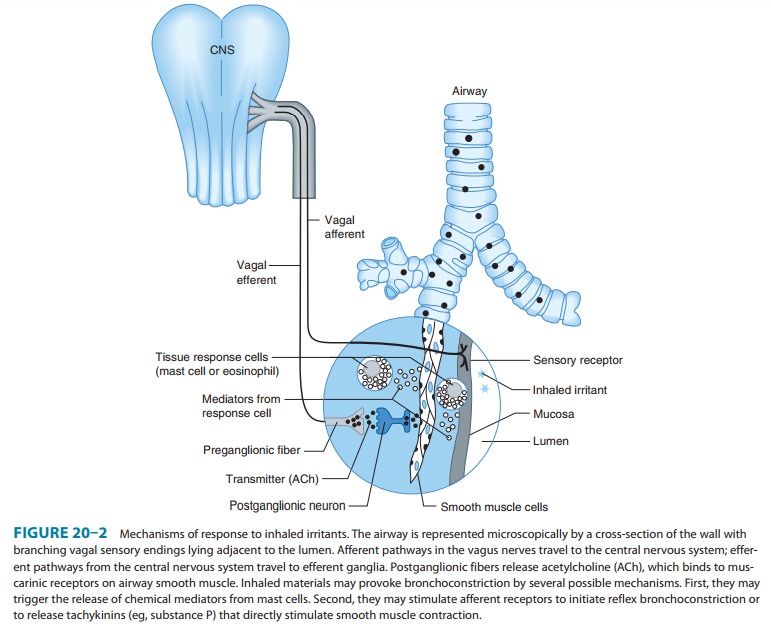 The hypothesis suggested by these studies—that asthmatic bronchospasm results from a combination of release of media-tors and an exaggeration of responsiveness to their effects— predicts that asthma may be effectively treated by drugs with different modes of action. Asthmatic bronchospasm might be reversed or prevented, for example, by drugs that reduce the amount of IgE bound to mast cells (anti-IgE antibody), pre-vent mast cell degranulation (cromolyn or nedocromil, sym-pathomimetic agents, calcium channel blockers), block the action of the products released (antihistamines and leukotriene receptor antagonists), inhibit the effect of acetylcholine released from vagal motor nerves (muscarinic antagonists), or directly relax airway smooth muscle (sympathomimetic agents, theophylline).

The second approach to the treatment of asthma is aimed not only at preventing or reversing acute bronchospasm but at reducing the level of bronchial responsiveness. Because increased responsive-ness appears to be linked to airway inflammation and because air-way inflammation is a feature of late asthmatic responses, this strategy is implemented both by reducing exposure to the allergens that provoke inflammation and by prolonged therapy with anti-inflammatory agents, especially inhaled corticosteroids.