Cromolyn sodium (disodium cromoglycate) and nedocromil sodium were once widely used for asthma management, especially in children, but have now been supplanted so completely by other therapies that they are mostly of historic interest.

Cromolyn sodium (disodium cromoglycate) and nedocromil sodium were once widely used for asthma management, especially in children, but have now been supplanted so completely by other therapies that they are mostly of historic interest. Both have low solubility, are poorly absorbed from the gastrointestinal tract, and must be inhaled as a microfine powder or microfine suspension. When taken by inhalation, they effectively inhibit both antigen-and exercise-induced asthma, and chronic use (four times daily) slightly reduces the overall level of bronchial reactivity. However, these drugs have no effect on airway smooth muscle tone and are ineffective in reversing asthmatic bronchospasm; they are only of value when taken prophylactically.

Cromolyn and nedocromil are thought to alter the function of delayed chloride channels in the cell membranes, inhibiting cell activation. This action on airway nerves is thought to mediate nedocromil’s inhibition of cough; on mast cells, the same mechanism is responsible for inhibition of the early response to antigen challenge and on eosinophils, for inhibition of the inflammatory response to inhalation of allergens. The inhibitory effect on mast cells appears to be specific for cell type, since cromolyn has little inhibitory effect on mediator release from human basophils. It may also be specific for different organs, since cromolyn inhibits mast cell degranulation in human and primate lung but not in skin. This in turn may reflect known differences in mast cells found in different sites, as in their neu-tral protease content. 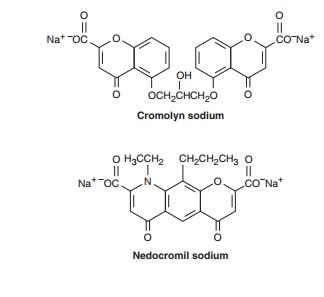 At one time, the idea that cromolyn inhibits mast cell degranu-lation was so well accepted that the inhibition of a response by cromolyn was thought to indicate the involvement of mast cells in the response. This simplistic idea was overturned in part by the finding that cromolyn and nedocromil inhibit the function of cells other than mast cells and in part by the finding that nedocromil inhibits appearance of the late response even when given after the early response to antigen challenge, ie, after mast cell degranula-tion has occurred.

In short-term clinical trials, pretreatment with cromolyn or nedo-cromil blocks the bronchoconstriction caused by allergen inhala-tion, by exercise, by sulfur dioxide, and by a variety of causes of occupational asthma. This acute protective effect of a single treat-ment makes cromolyn useful for administration shortly before exercise or before unavoidable exposure to an allergen.

When taken regularly (two to four puffs two to four times daily) by patients with perennial (nonseasonal) asthma, both agents modestly but significantly reduce symptomatic severity and the need for bronchodilator medications, particularly in young patients with extrinsic asthma. These drugs are not as potent nor as predictably effective as inhaled corticosteroids, and the only way of determining whether a patient will respond is by a thera-peutic trial of 4 weeks’ duration.

Cromolyn and nedocromil solutions are also useful in reducing symptoms of allergic rhinoconjunctivitis. Applying the solution by nasal spray or eye drops several times a day is effective in about 75% of patients, even during the peak pollen season.

Because the drugs are so poorly absorbed, adverse effects of cromolyn and nedocromil are minor and are localized to the sites of deposition. These include such minor symptoms as throat irri-tation, cough, and mouth dryness, and, rarely, chest tightness, and wheezing. Some of these symptoms can be prevented by inhaling a β2-adrenoceptor agonist before cromolyn or nedocromil treat-ment. Serious adverse effects are rare. Reversible dermatitis, myo-sitis, or gastroenteritis occurs in less than 2% of patients, and a very few cases of pulmonary infiltration with eosinophilia and anaphylaxis have been reported. This lack of toxicity accounts for cromolyn’s formerly widespread use in children, especially those at ages of rapid growth. Its place in treatment of childhood asthma has lately diminished, however, because of the significantly greater efficacy of even low-dose corticosteroid treatment and because of the availability of an alternate nonsteroidal controller class of medication, the leukotriene pathway inhibitors .