The three important methylxanthines are theophylline, theobro-mine, and caffeine.

The three important methylxanthines are theophylline, theobro-mine, and caffeine. Their major source is beverages (tea, cocoa,and coffee, respectively). The importance of theophylline as a therapeutic agent in the treatment of asthma has waned as the greater effectiveness of inhaled adrenoceptor agents for acute asthma and of inhaled anti-inflammatory agents for chronic asthma has been established, but theophylline’s very low cost is an important advantage for economically disadvantaged patients in societies in which health care resources are limited. 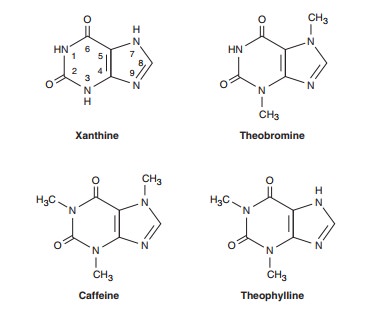 Several mechanisms have been proposed for the actions of meth-ylxanthines, but none has been firmly established. At high concen-trations, they can be shown in vitro to inhibit several members of the phosphodiesterase (PDE) enzyme family (Figure 20–3). Because the phosphodiesterases hydrolyze cyclic nucleotides, this inhibition results in higher concentrations of intracellular cAMP and, in some tissues, cGMP. Cyclic AMP is responsible for a myriad of cellular functions including, but not limited to, stimula-tion of cardiac function, relaxation of smooth muscle, and reduc-tion in the immune and inflammatory activity of specific cells.

Of the various isoforms of phosphodiesterase that have been identified, PDE4 appears to be the most directly involved in actions of methylxanthines on airway smooth muscle and on inflammatory cells. The inhibition of PDE4 in inflammatory cells reduces their release of cytokines and chemokines, which in turn results in a decrease in immune cell migration and activation.

In an effort to reduce toxicity while maintaining therapeutic efficacy, selective inhibitors of different isoforms of PDE4 were developed. Many were abandoned after clinical trials showed that their toxicities of nausea, headache, and diarrhea restricted dosing to subtherapeutic levels, but one, roflumilast, has recently beenapproved by the Food and Drug Administration (FDA) as a treat-ment for COPD, though not for asthma.

Another proposed mechanism is inhibition of cell surface receptors for adenosine. These receptors modulate adenylyl cyclase activity, and adenosine has been shown to provoke contraction of isolated airway smooth muscle and histamine release from airway mast cells. It has been shown, however, that xanthine derivatives devoid of adenosine antagonism (eg, enprofylline) may be potent in inhibiting bronchoconstriction in asthmatic subjects.

Some research suggests that the efficacy of theophyllines may be due to a third mechanism of action: enhancement of histone deacetylation. Acetylation of core histones is necessary for activa-tion of inflammatory gene transcription. Corticosteroids act, at least in part, by recruiting histone deacetylactylases to the site of inflammatory gene transcription, an action enhanced by low-dose theophylline. This interaction should predict that low-dose theo-phylline treatment would enhance the effectiveness of corticoster-oid treatment, and some clinical trials indeed support the idea that theophylline treatment is effective in restoring corticosteroid responsiveness in asthmatics who smoke and in patients with some forms of COPD.

The methylxanthines have effects on the central nervous system, kidney, and cardiac and skeletal muscle as well as smooth muscle. Of the three agents, theophylline is most selective in its smooth muscle effects, whereas caffeine has the most marked central ner-vous system effects.

In low and moderate doses, the methylxanthines—especially caffeine—cause mild cortical arousal with increased alertness and deferral of fatigue. The caffeine contained in beverages—eg, 100 mg in a cup of coffee—is sufficient to cause nervousness and insomnia in sensitive individuals and slight bronchodilation in patients with asthma. The larger doses necessary for more effective bronchodila-tion commonly cause nervousness and tremor in some patients. Very high doses, from accidental or suicidal overdose, cause medul-lary stimulation and convulsions and may lead to death.

The methylxanthines have positive chronotropic and inotropic effects. At low concentrations, these effects appear to result from inhibition of presynaptic adenosine receptors in sympathetic nerves increasing catecholamine release at nerve endings. The higher con-centrations (> 10 μmol/L, 2 mg/L) associated with inhibition of phosphodiesterase and increases in cAMP may result in increased influx of calcium. At much higher concentrations (> 100 μmol/L), sequestration of calcium by the sarcoplasmic reticulum is impaired.

The clinical expression of these effects on cardiovascular func-tion varies among individuals. Ordinary consumption of coffee and other methylxanthine-containing beverages usually produces slight tachycardia, an increase in cardiac output, and an increase in periph-eral resistance, raising blood pressure slightly. In sensitive individu-als, consumption of a few cups of coffee may result in arrhythmias. In large doses, these agents also relax vascular smooth muscle except in cerebral blood vessels, where they cause contraction.

Methylxanthines decrease blood viscosity and may improve blood flow under certain conditions. The mechanism of this action is not well defined, but the effect is exploited in the treat-ment of intermittent claudication with pentoxifylline, a dimeth-ylxanthine agent. However, no evidence suggests that this therapy is superior to other approaches.

The methylxanthines stimulate secretion of both gastric acid and digestive enzymes. However, even decaffeinated coffee has a potent stimulant effect on secretion, which means that the pri-mary secretagogue in coffee is not caffeine.

The methylxanthines—especially theophylline—are weak diuret-ics. This effect may involve both increased glomerular filtration and reduced tubular sodium reabsorption. The diuresis is not of sufficient magnitude to be therapeutically useful.

The bronchodilation produced by the methylxanthines is the major therapeutic action in asthma. Tolerance does not develop, but adverse effects, especially in the central nervous system, may limit the dose . In addition to their effect on airway smooth muscle, these agents—in sufficient concentration—inhibit antigen-induced release of histamine from lung tissue; their effect on mucociliary transport is unknown.

The respiratory actions of the methylxanthines may not be con-fined to the airways, for they also strengthen the contractions of isolated skeletal muscle in vitro and improve contractility and reverse fatigue of the diaphragm in patients with COPD. This effect on diaphragmatic performance—rather than an effect on the respiratory center—may account for theophylline’s ability to improve the ventilatory response to hypoxia and to diminish dys-pnea even in patients with irreversible airflow obstruction.

Of the xanthines, theophylline is the most effective bronchodilator, and it has been shown repeatedly both to relieve airflow obstruc-tion in acute asthma and to reduce the severity of symptoms and time lost from work or school in patients with chronic asthma. Theophylline base is only slightly soluble in water, so it has been administered as several salts containing varying amounts of theo-phylline base. Most preparations are well absorbed from the gastro-intestinal tract, but absorption of rectal suppositories is unreliable.

Improvements in theophylline preparations have come from alterations in the physical state of the drugs rather than from new chemical formulations. For example, the increased surface area of anhydrous theophylline in a microcrystalline form facilitates solubilization for complete and rapid absorption after oral administration. Numerous sustained-release preparations (see Preparations Available) are available and can produce therapeutic blood levels for 12 hours or more. These preparations offer the advantages of less frequent drug administration, less fluctuation of theophylline blood levels, and, in many cases, more effective treat-ment of nocturnal bronchospasm.

Theophylline should be used only where methods to measure theophylline blood levels are available because it has a narrow thera-peutic window, and its therapeutic and toxic effects are related to its blood level. Improvement in pulmonary function is correlated with plasma concentration in the range of 5–20 mg/L. Anorexia, nausea, vomiting, abdominal discomfort, headache, and anxiety occur at concentrations of 15 mg/L in some patients and become common at concentrations greater than 20 mg/L. Higher levels (> 40 mg/L) may cause seizures or arrhythmias; these may not be preceded by gastrointestinal or neurologic warning symptoms.

The plasma clearance of theophylline varies widely. Theophy-lline is metabolized by the liver, so usual doses may lead to toxic concentrations of the drug in patients with liver disease. Conversely, clearance may be increased through the induction of hepatic enzymes by cigarette smoking or by changes in diet. In normal adults, the mean plasma clearance is 0.69 mL/kg/min. Children clear theophylline faster than adults (1–1.5 mL/kg/min). Neonates and young infants have the slowest clearance . Even when maintenance doses are altered to correct for the above factors, plasma concentrations vary widely.

Theophylline improves long-term control of asthma when taken as the sole maintenance treatment or when added to inhaled corticosteroids. It is inexpensive, and it can be taken orally. Its use, however, also requires occasional measurement of plasma levels; it often causes unpleasant minor side effects (especially insomnia); and accidental or intentional overdose can result in severe toxicity or death. For oral therapy with the prompt-release formulation, the usual dose is 3–4 mg/kg of theophylline every 6 hours. Changes in dosage result in a new steady-state concentration of theophylline in 1–2 days, so the dosage may be increased at inter-vals of 2–3 days until therapeutic plasma concentrations are achieved (10–20 mg/L) or until adverse effects develop.