● The exterior angle of a triangle is equal to the sum of the two interior opposite  angles.

● Two lines segments are congruent if they have the same length.

● If three sides of one triangle are equal to the corresponding sides of the other triangle then the two triangles are congruent. This is known as Side – Side – Side criterion.

● In right angled triangle, the side which is opposite to right angle is the largest side called Hypotenuse. 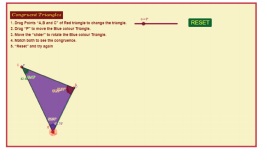