We are now going to learn a very important geometrical concept called congruence. To understand the concept of congruency of triangles, let us first look into the congruency of shapes.

We are now going to learn a very important geometrical concept called congruence. To understand the concept of congruency of triangles, let us first look into the congruency of shapes.

Let us observe the following pictures.

To understand congruency of shapes, let us take a pack of cards and choose any two cards and place them one over the other. We are able to place them in such a way that one card matches exactly with the other in size and shape. Hence all the cards in a pack are equal in both size and shape.

Any pair or set of objects with this property are said to be congruent.

How can we check the congruence of two objects or figures?

To check the congruence of the objects, we can use the method of superposition. In this method we have to make a trace-copy of one figure and place it over the other. If the figures match each other completely then, they are said to be congruent. In this method to match the original with the trace copy, we are not allowed to bend, twist or stretch, but we can translate or rotate.

have the same length. If we use the superposition method

will match each other. Hence the line segments are congruent and we can write it as

From the above cases, we understand that lines are congruent if they have the same length.

Measure and group the pair of congruent line segments. 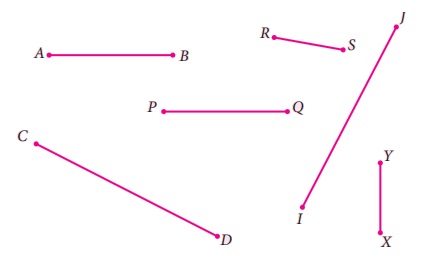 Look at the following angles.

To check the congruency of angles ∠BAC and ∠FEG , make a trace copy of ∠BAC . By superposition method, if we try to match ∠BAC with the ∠FEG by placing the arm AB on the arm EF, then the arm AC will coincide with the arm EG. Even if length of the arms are different, the angles ∠BAC matches exactly with ∠FEG . Hence the angles are congruent.

If two angles ( ∠BAC and ∠FEG ) are congruent, it can be represented as ∠BAC ≡ ∠FEG .

Hence we can write ∠BAC = ∠FEG for ∠BAC ≡ ∠FEG.

Find the pairs of congruent angles either by superposition method or by measuring them.

They are identical in shape and size. Their sides (line segments) are equal and the angles are also equal.

Their radii are equal. If they are placed on each other they will coincide. These types of figures are called congruent plane figures.

By trace copy superposition method, it can be observed that ∆XYZ matches identically with ∆ABC.

All the sides and the angles of ∆ABC are equal to the corresponding sides and angles of ∆XYZ . So we can say the two triangles are congruent. We can express it as ∆ABC ≡ ∆XYZ .

The side AB matches YZ, BC matches XY and CA matches ZX. These pairs are called corresponding sides.

Suppose we try to match vertex A with vertex Y or vertex X (Fig. 4.23), we can observe that the triangles do not match each other.

This does not imply that the two triangles are not congruent.

Hence, the above triangles ∆ABC ≡ ∆XYZ are congruent.

So, we conclude that, if all the sides and all the angles of one triangle are equal to the corresponding sides and angles of another triangle, then the two triangles are congruent to each other.

6. Conditions for Triangles to be Congruent 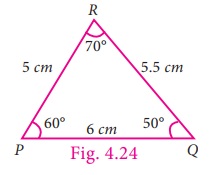 To draw a triangle congruent to the given triangle do we need to know all measures of sides and angles of the triangle?

To construct a triangle, we need only three measures.

Those three measures can be any of the following.

2. The lengths of two sides and the angle included between those two sides. (or)

3. Two angles and the length of the side included by angles.

We can try the above conditions one by one.

1. Side–Side–Side congruence criterion (SSS) - The lengths of all three sides are given

Step 2: With X as centre, draw an arc of radius 5 cm above the line XY.

Step 3: With Y as centre, draw an arc of radius 5.5 cm to intersect arc drawn in step 2. Mark the point of intersection as Z.

Now XYZ is the required triangle.

Using trace copy superposition method, if we place the ∆XYZ on the ∆PQR (Fig. 4.24) in such a way that the sides PQ on XY, PR on XZ and QR on YZ, then both the triangles (∆XYZ and ∆PQR) matches exactly in size and shape.

Here we used only sides to check the congruence of the triangles, so we can say the condition as, if three sides of one triangle are equal to the corresponding sides of the other triangle then the two triangles are congruent. This criterion of congruency is known as Side – Side – Side.

2. Side-Angle-Side congruence criterion (SAS) - The lengths of two sides and the angle included between the two sides are given. 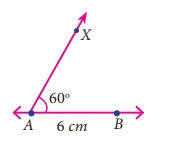 Step 3: With A as centre, draw an arc of radius 5 cm to cut the ray AX. Mark the point of intersection as C. 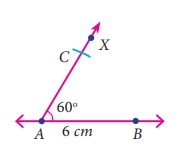 ABC is the required triangle.

Using trace copy superposition method, if we place the ∆ABC on the ∆PQR (Fig. 4.24) in such a way that the sides AB on PQ, AC on PR and the ∠ A on ∠ P, then both the triangles (∆ABC and ∆PQR) matches exactly in size and shape. Here, we are using only two sides and one included angle to check the congruence of triangles.

This criterion is called Side – Angle – Side.

3. Angle – Side – Angle congruence criterion (ASA) - Two angles and the length of a side included by the angles are given. 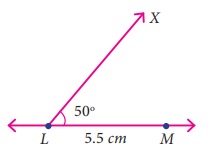 Step 3: At M, draw another ray MY making an angle of 70° with LM. Mark the point of intersection of the rays LX and MY as N. 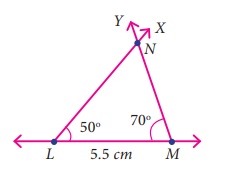 LMN is the required triangle.

Using trace copy superposition method, if we place the ∆LMN on the ∆PQR (Fig. 4.24) in such a way that the angles ∠L on ∠Q, ∠M on ∠R and the side LM on QR, then both the triangles (∆LMN and ∆PQR) matches exactly in size and shape. Here, we used only two angles and one included side to check the congruence of triangles.

Therefore, we can say, if two angles and the included side of one triangle are congruent to the corresponding parts of another triangle, then the two triangles are congruent. This criterion is called Angle – Side – Angle criterion.

In all the given triangles the side which is opposite to the right angle is the largest side called Hypotenuse.

In the above triangles the sides AC, QR and MN are the hypotenuse. Remember that hypotenuse is related with right angled triangles only.

The name of the criterion clearly states that this criterion is used with right angled triangles only.

In these two triangles right angle is common. And if we are given the sides making right angles then we can use the SAS criterion to check the congruency of the triangles.

This is called Right angle – Hypotenuse – Side criterion.

Side–Side–Angle (or) Angle–Side–Side (SSA or ASS) combination also will not prove congruency of triangles. This combination deals with two sides and a non-included angle.

(ii) Given triangles are congruent. Identify the corresponding parts and write the congruent statement.

(iii) Mention the conditions needed to conclude the congruency of the triangles with reference to the above said criterions. Give reasons for your answer.