Summary of Causes of Extracellular Edema

Summary of Causes of Extracellular Edema

A large number of conditions can cause fluid accumu-lation in the interstitial spaces by the abnormal leaking of fluid from the capillaries or by preventing the lymphatics from returning fluid from the interstitium back to the circulation. The following is a partial list of con-ditions that can cause extracellular edema by these two types of abnormalities:

Immobilization of parts of the body

A.Immune reactions that cause release of histamine and other immune products

Edema Caused by Heart Failure. One of the most serious andmost common causes of edema is heart failure. In heart failure, the heart fails to pump blood normally from the veins into the arteries; this raises venous pressure and capillary pressure, causing increased capillary filtration. In addition, the arterial pressure tends to fall, causing decreased excretion of salt and water by the kidneys, which increases blood volume and further raises capil-lary hydrostatic pressure to cause still more edema. Also, diminished blood flow to the kidneys stimulates secretion of renin, causing increased formation of angiotensin II and increased secretion of aldosterone, both of which cause additional salt and water retention by the kidneys. Thus, in untreated heart failure, all these factors acting together cause serious generalized extra-cellular edema.

Edema Caused by Decreased Kidney Excretion of Salt and Water.

As discussed earlier, most sodium chloride added to the blood remains in the extracellular compartment, and only small amounts enter the cells. Therefore, in kidney diseases that compromise urinary excretion of salt and water, large amounts of sodium chloride and water are added to the extracellular fluid. Most of this salt and water leaks from the blood into the interstitial spaces, but some remains in the blood. The main effects of this are to cause (1) widespread increases in interstitial fluid volume (extracellular edema) and (2) hypertension because of the increase in blood volume. As an example, children who develop acute glomerulonephritis, in which the renal glomeruli are injured by inflammation and therefore fail to filter adequate amounts of fluid, also develop serious extracellular fluid edema in the entire body; along with the edema, these children usually develop severe hypertension.

Edema Caused by Decreased Plasma Proteins. A reduction inplasma concentration of proteins because of either failure to produce normal amounts of proteins or leakage of proteins from the plasma causes the plasma colloid osmotic pressure to fall. This leads to increased capillary filtration throughout the body as well as extra-cellular edema.

Cirrhosis of the liver is another condition that causesa reduction in plasma protein concentration. Cirrhosis means development of large amounts of fibrous tissue among the liver parenchymal cells. One result is failure of these cells to produce sufficient plasma proteins, leading to decreased plasma colloid osmotic pressure and the generalized edema that goes with this condition.

Another way that liver cirrhosis causes edema is that the liver fibrosis sometimes compresses the abdominal portal venous drainage vessels as they pass through the liver before emptying back into the general circulation. Blockage of this portal venous outflow raises capillary hydrostatic pressure throughout the gastrointestinal area and further increases filtration of fluid out of the plasma into the intra-abdominal areas. When this occurs, the combined effects of decreased plasma protein concentration and high portal capillary pres-sures cause transudation of large amounts of fluid and protein into the abdominal cavity, a condition referred to as ascites. 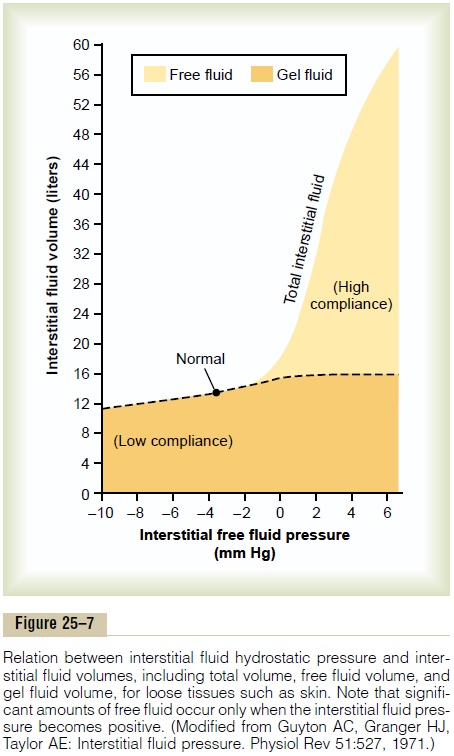