Although often portrayed as “primitive fishes”, modern sharks, skates, and rays are highly derived, specialized fishes that differ dramatically from the abundant, diverse elasmobranchs that dominated marine and even freshwater habitats through much of the Mesozoic.

Although often portrayed as “primitive fishes”, modern sharks, skates, and rays are highly derived, specialized fishes that differ dramatically from the abundant, diverse elasmobranchs that dominated marine and even freshwater habitats through much of the Mesozoic. Many traits that characterize elasmobranchs – such as a cartilaginous skeleton, placoid scales, internal fertilization, replacement dentition, and multiple gill slits – appeared early in the 400+million year history of the group. However, modern sharks, skates, and rays exhibit tremendous variation in these and other characteristics, and have developed additional anatomical, life history, and behavioral adaptations that set them apart from bony fishes and make them surprisingly vulnerable to human exploitation. Only in recent years has the uniqueness and vulnerability of elasmobranchs received recognition and adequate attention.

Definition of the group

Modern elasmobranchs are generally large (>1 m) predatory fishes with a calcified but seldom ossified skeleton, including distinctive calcified vertebral centra. They differ from bony fishes in that the skull lacks sutures and their teeth are not fused to the jaws but are instead embedded in the connective tissue of the jaws. Teeth, which have the same embryonic origin as and may be derived from placoid scales (see  Modifications of scales), are replaced serially; such replacement is less common in osteichthyans. The biting edge of the upper jaw is formed by the palatoquadrate cartilage, rather than by the maxillary or premaxillary bones. The palatoquadrate is free from the braincase, creating a protrusible upper jaw during feeding. The mouth is subterminal (=ventral). Nasal openings are ventral and incompletely divided by a fl ap into incurrent and excurrent portions; bony fishes generally have completely separated, dorsally positioned nasal openings. Fin

Typical sharks, skates, and rays usually have five, and sometimes six or seven, external gill slits on each side. The first gill slit of elasmobranchs is often modified as aspiracle, supported by the hyoid arch and first functional gill arch. Elasmobranchs lack lungs and gas bladders, but possess large, buoyant livers and spiral valve intestines. Internal fertilization is universal to the group; males possess pelvic fin-derived intromittent organs (myxopterygia or claspers) and females either lay eggs or nourish embryos internally for several months before giving birth. Chloride ions and metabolic waste products in the form of urea and trimethyl- amine oxide (TMAO, an ammonia derivative) are concentrated in the blood and serve in osmotic regulation. A single cloaca serves as an anal and urogenital opening.

Most orders of living chondrichthyans appeared by the Upper Jurassic, and all orders appeared by the end of theCretaceous. Some extant genera have been found in Upper Cretaceous deposits, with little change in some species since the Miocene (Compagno 1990a). Most extant groups have evolutionary histories much younger than actinopterygian and neopterygian fishes (see  Advanced jawed fishes II: Chondrichthyes). All non-euselachian elasmobranchs are extinct: cladoselachians died out by the Permo- Triassic transition and xenacanths died out during the Triassic. Ancestral groups such as ctenacanths and hybodonts disappeared during the Mesozoic.

Although some living sharks have morphologies similar to ancestral Paleozoic and Mesozoic species, these similarities reflect convergent design. The modern groups are very different with respect to features of the cranium, vertebral column, fin skeletons, tooth structure, and squamation. The greatest departure from a generalized body form exists in the highly successful batoids, the most advanced of which are the large-brained, filter-feeding manta and devil rays (Mobulinae). Among the sharklike elasmobranchs, the most derived species include the hammerhead sharks (Sphyrnidae), angel sharks (Squatinidae), and saw sharks (Pristiophoridae) (Compagno 2001; Compagno et al. 2005a, 2005b). Shark systematics is an active field and relationships among most groups are well established, although some groups remain unresolved and await further study (de Carvalho 1996; McEachran et al. 1996) (Fig. 12.1). 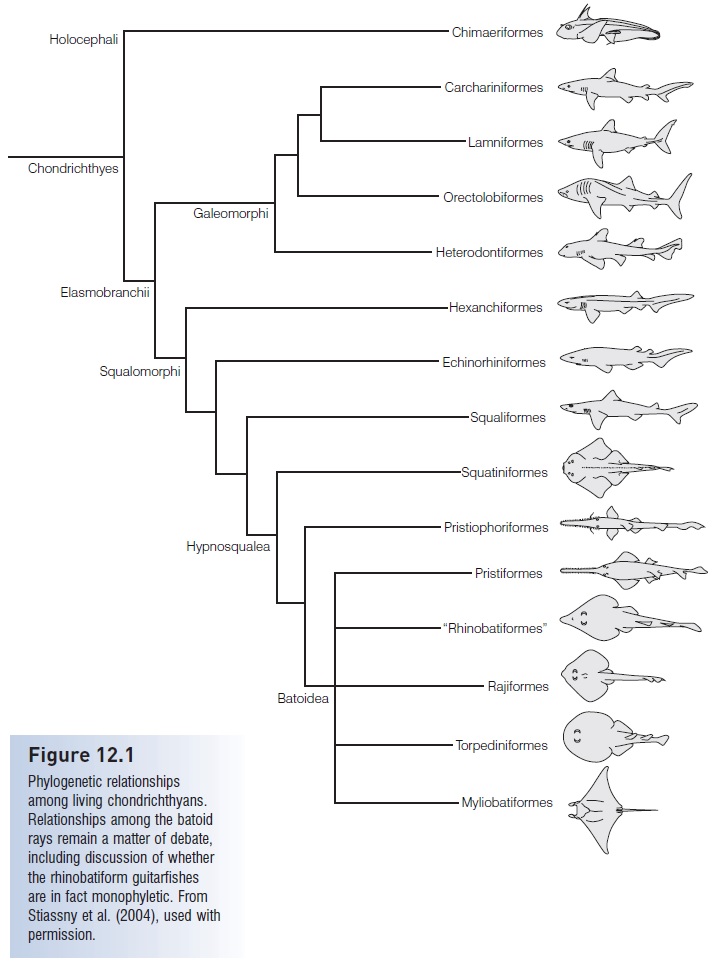