Water as a medium for locomotion exacts a high energetic price on any organism.

Water as a medium for locomotion exacts a high energetic price on any organism. The long evolutionary history of the elasmobranchs is characterized by the development of anatomical and physiological traits that appear to favor movement at the lowest possible energetic cost. Many of the features of the integument, fins, buoyancy devices, and swimming behavior of sharks, as well as short- and longterm movement patterns, reflect possible adaptations to these energetic constraints.

Most elasmobranchs have heterocercal tails (see  Swimming in sharks: the alternative approach), with asymmetry in both the internal support and external appear ance. The typical heterocercal tail is associated with an active life style above the bottom, as in most requiem sharks and hammerheads. Diversity in tail fin shape is however considerable (Bone 1988). Symmetrical tails preceded by lateral keels characterize high-speed, pelagic sharks such as the Mako, White, and Porbeagle (Lamnidae); large body size and symmetrical tails characterized the presumably pelagic, predatory edestoid holocephalans of the Carboniferous. Lateral keels are also found convergently on such pelagic predators as tunas (Scombridae) and billfishes (Istiophoridae).

Extreme heterocercality in contrast is usually found in relatively inactive, benthic sharks such as the wobbegong’s and nurse sharks (Orectolobidae) and cat sharks that essentially lack a lower tail lobe. A specialized, extreme heterocercal tail occurs in active swimmers such as the thresher sharks, in which the dorsal tail lobe, which may constitute 50% of the body length, is purportedly used for herding and stunning prey. Many rays lack a tail fin (e.g., stingrays, eagle rays, manta rays) and swim by fl apping or undulating their scaleless pectoral fins. Angel sharks show reversed symmetry, with the lower tail lobe enlarged.

The placoid scales of sharks have a morphology that apparently serves a streamlining function (Fig. 12.6). Unlike the relatively flat scales of many osteichthyans, each placoid denticle of a shark has a pedestal and an expanded top, which often has ridges running parallel to the body of the shark. It has been postulated that this particular shape, which is mimicked in the winged keels of high performance sailboats, helps reduce swimming-induced drag by reducing turbulence along the shark’s body. Swim suits designed for competitive swimmers have purportedly incorporated denticle patterns in their construction to promote drag reduction, although comparative tests indicate no significant improvement in swimming times (Toussaint et al. 2002; www.coachesinfo.com/article/146).

Additionally, the shape and arrangement of adjoining scales in active sharks may also aid in prey capture. Hydrophones detect much less noise from swimming sharks than from swimming bony fishes, suggesting that turbulence reduction also enhances stealth in sharks. Not surprisingly, the scales of benthic and slow-swimming sharks, as well as many rays, lack apparent streamlining features and are instead enlarged for protection or are absent (e.g., Bramble Shark, Echinorhinidae; Thorny Skate, Rajidae) (Moss 1984). The sting or barb on the dorsal surface of the tail of a stingray is a modified, elongate placoid scale with serrate edges and a venom gland at its base.

Maintenance of a constant depth is potentially expensive if a fish must constantly swim to overcome gravity. Bony fishes control their buoyancy by filling or emptying a gas bladder (see  Buoyancy regulation). Sharks have arrived at a completely different solution to the challenge of buoyancy control: they both reduce their body weight and fill their body with low-density substances. Weight reduction comes largely from a skeleton made of cartilage,which has 55% the specific gravity of bone (1.1 vs. 2.0). 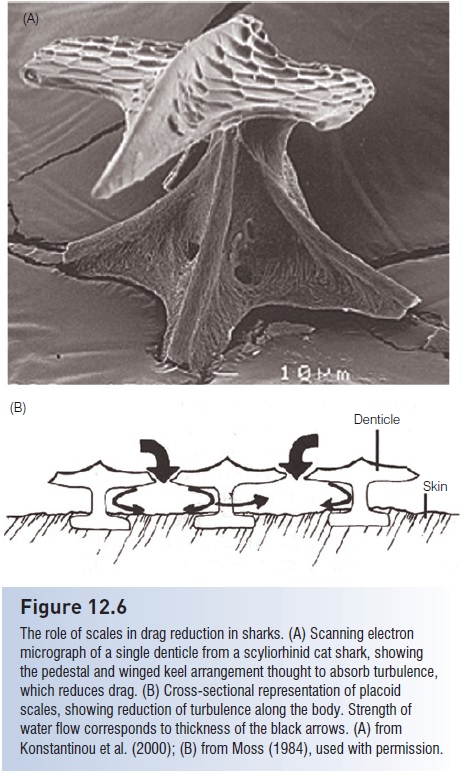 The role of scales in drag reduction in sharks. (A) Scanning electron micrograph of a single denticle from a scyliorhinid cat shark, showing the pedestal and winged keel arrangement thought to absorb turbulence, which reduces drag. (B) Cross-sectional representation of placoid scales, showing reduction of turbulence along the body. Strength of water flow corresponds to thickness of the black arrows. (A) fromKonstantinou et al. (2000); (B) from Moss (1984), used with permission

Buoyancy can also be enhanced by the oils contained in the large liver, which may constitute up to 30% of the weight of the fish. Deepsea squaloid sharks and some pelagic species such as Whale, Basking, and White Sharks have large livers that are as much as 90% oil. These sharks are almost neutrally buoyant (e.g., a Basking Shark that weighs 1000 kg in air weighs only 3.3 kg in water, or about 0.3% of its air weight). Typical bony fishes with their gas bladders deflated have in-water weights about 5% of air weights, i.e., a 100 kg fish weighs 5 kg in water. The oil in a shark’s liver is primarily squalene, which has a specific gravity of 0.86 (the specific gravity of sea water is 1.026) (Baldridge 1970, 1972; Moss 1984; Bone 1988).

An oil-based buoyancy system may have advantages over a gas-filled system. To maintain neutral buoyancy, bony fishes use energy to fill or empty the gas bladder or they will sink rapidly or fl oat uncontrollably. The physics of gas secretion and absorption limit the rate at which bony fishes can change depth. Oil, unlike gas, is incompressible and provides constant buoyancy regardless of depth and pressure. Sharks can therefore move up and down repeatedly over tens or hundreds of meters on a daily basis without having to make adjustments in their buoyancy control mechanism. In recent years, telemetry studies have shown vertical movements to depths of more than 400 m in hammerheads, 590 m in Bigeye Thresher Sharks (Alopias superciliosus), 750 m in Basking Sharks, and to at least 980 m in Whale Sharks and White Sharks (e.g., Sims et al. 2003; Weng & Block 2003; Bonfil et al. 2005; Wilson et al.2006b; see also Carey and Scharold (1990) on Blue Sharks and Carey and Clark (1995) on Sixgill Sharks).

Such rapid and repeated vertical migration, with its attendant exposure to tremendous pressure and temperature changes, is uncharacteristic of most bony fishes. An additional energetic advantage of an oil-filled liver is that it serves as an energy reserve; many sharks metabolize their liver oils when starved. An apparent downside of this adaptation is that producing lipids for liver storage is energetically costly.

Activity spaces, or home ranges, of most sharks are poorly known. Recent advances in electronic telemetry have permitted the fitting of ultrasonic transmitters to sharks and tracking them through several days and even weeks of activity (Nelson 1990). Juvenile Lemon Sharks less than 1 m long in Bimini initially patrol shallow beach areas of about 0.7 km2. This area increases with age: a 1.8 m long shark may have a range of 18 km2, and a 2.3 m long shark’s range encompasses more than 90 km2. Habitats change with age also, as the shark moves from the shallow nursery area to open sand flats and finally to the reef and beyond (Sundstrom et al. 2001). Daily homing movements, involving daytime aggregation at seamounts and nighttime foraging in open water several kilometers away, have been demonstrated in Scalloped Hammerheads, Sphyrna lewini (Klimley & Nelson 1981).

On a larger scale, many sharks make extensive movements and migrations on the order of hundreds and even thousands of kilometers. Based on tag-and-recapture data, sharks can be classified as local, coastal, or oceanic. Local sharks, including Bull, Nurse, and Bonnethead sharks, spend the majority of their adult lives in a relatively confined, nearshore area of a few hundred square kilometers. Coastal species, such as Sandbar, Blacktip, and Dusky sharks, stay near continental shelves but move 1600 km or more. Bigeye Threshers move from waters off New York to the eastern Gulf of Mexico, a distance of 2767 km. Sandbar Sharks move between the northern Atlantic region of the USA and the Yucatan Peninsula of Mexico, a distance of about 5600 km. Even comparatively small, coastal sharks can cover large distances during their lifetimes. A c. 1.5 m long School Shark, Galeorhinus galeus, tagged off New Zealand’s South Island was caught 4940 km away off South Australia, 3.5 years later (Hurst et al. 1999). A Spiny Dogfish, Squalus acanthias, tagged off Washington state moved 8704 km during the 10-year period between release and recapture (see Kohler & Turner 2001 for an extensive

Oceanic species may cross entire ocean basins, sometimes repeatedly. Maximum distances traveled by oceanic species in the North Atlantic include 7800 km (Blue Shark), 6700 km (Tiger Shark), 4500 km (Mako), and 2800 km (Oceanic Whitetip) (these are underestimates because they record only start and end points). Telemetered movements using satellite tracking are even more impressive. A Whale Shark tagged in the Sea of Cortez, Mexico traveled 13,000 km in 37 months to the western North Pacific Ocean (Eckert & Stewart 2001). One Whale Shark tagged in the Sulu Sea of the Philippines traveled to the South China Sea off Vietnam 4567 km distant in 2.5 months, while another tagged off the northwestern coast of Malaysia moved 8025 km over a 4-month period (Eckert et al. 2002). 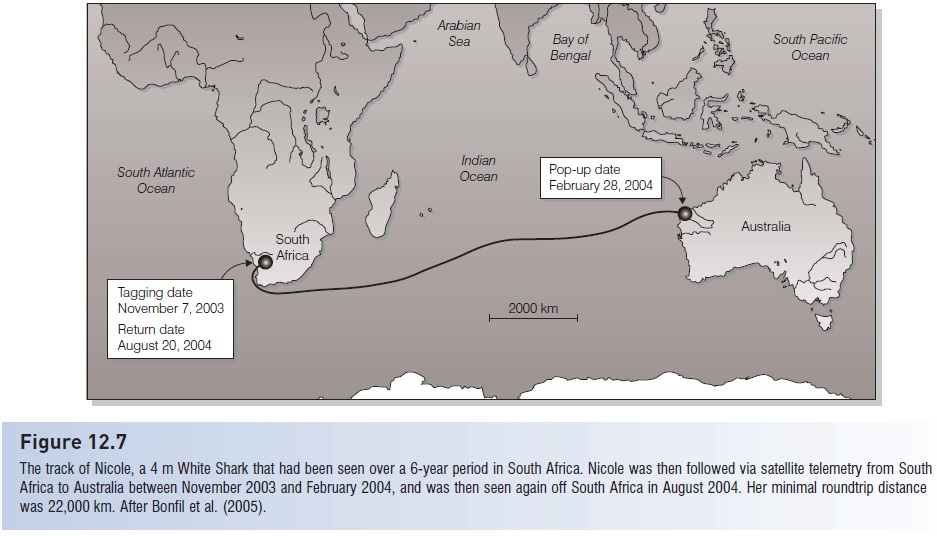 The track of Nicole, a 4 m White Shark that had been seen over a 6-year period in South Africa. Nicole was then followed via satellite telemetry from South Africa to Australia between November 2003 and February 2004, and was then seen again off South Africa in August 2004. Her minimal roundtrip distance was 22,000 km. After Bonfil et al. (2005).

Most spectacularly, some sharks recross major oceans. Blue Sharks make return trips between North America and Europe, a distance that exceeds 16,000 km (Casey & Kohler 1991). White Sharks are now known to migrate between central California and Hawaii, a minimum distance of 3800 km (Boustany et al. 2002). A 4 m female White Shark nicknamed Nicole (after Australian actress Nicole Kidman, an advocate of shark conservation) was followed via satellite telemetry across the Indian Ocean and back between South Africa and Australia. The round trip took 9 months and covered a minimal distance of 22,000 km (Bonfil et al. 2005) (Fig. 12.7).These and other large-scale movements across political boundaries have substantial conservation implications because management regulations and enforcement vary greatly among nations.