As most sharks are primarily nocturnal foragers, it is not surprising that non-visual senses are particularly well developed.

As most sharks are primarily nocturnal foragers, it is not surprising that non-visual senses are particularly well developed. Olfactory sensitivity has long been recognized as extreme in sharks. Fish extracts can be detected by Lemon Sharks at levels as low as 1 part per 25 million parts sea water, and in Blacktip and Gray Reef sharks at 1 part per 10 billion, equivalent to about one drop dispersed in an Olympic-sized swimming pool (50 m x25 m x2 m deep). This sensitivity, which is greatest to proteins, amino acids, and amines, is achieved at several levels of operation. Water flows into the shark’s nasal sacs located under the front of the snout, perfusing the underlying, large olfactory organs. Receptor cells in the organs receive stimuli which are then transmitted via the olfactory nerve to the olfactory bulb and lobes of the forebrain for integration. Olfactory lobes/ bulbs in the shark brain are greatly enlarged.

Using this sensitivity, sharks are exceptionally adept at following odor trails in the water, even without currents to guide them upstream to an odor source (Montgomery 1988). Odor localization may be accomplished by comparing the intensity of stimulation in either chamber. This scenario suggests another possible function of the expanded rostral cartilage of hammerhead sharks. Lateral displacement of the nostrils on the margins of the hammer might provide improved stereo-olfaction, making odor localization easier. Olfaction also plays a role in breeding, as evidence exists that sexual behavior is mediated by chemical sexual attractants (pheromones) produced by females (Hueter & Gilbert 1991).

Contrary to conventional wisdom, sharks have good vision. As a group, sharks tend to be slightly myopic (farsighted). The shark retina is dominated by rods, as would be expected of fishes that are chiefly active at night and twilight. Nocturnal sensitivity is enhanced by an additional layer of reflective guanine platelets behind the retina, called the tapetum lucidum. The tapetum reflects light back through the eye (hence the “eye shine” of sharks and other nocturnal animals), which allows light entering the eye to strike the retinal sensory cells twice, increasing the likelihood of detection. Platelets are angled such that reflected light passes through the same receptors as incoming light, thus preserving acuity.

Sharks also typically have low densities of cone cells in their retinae, which generally increase daytime acuity and are associated withhue discrimination (color vision). Color vision has been demonstrated in Lemon Sharks. Sharks differ from most other fishes, and are more similar to mammals, in that they possess a pupillary response to changing light levels, which means they can regulate the amount of light entering their eyes. In many batoids, an additional eyelid-like structure called the operculum pupillare expands under bright light conditions to shade the eye and perhaps increase responsiveness to movement.

Acoustic sensitivity and sound localization capabilities are also greatly developed in sharks. Sharks hear sounds below 600 Hz (the fundamental of E below high C on a piano), including infrasonic sound below 10 Hz. Hearing is centered in three chambers within the inner ear that contain the maculae (sing. =macula). The maculae contain specialized nerve cells that are linked to small granules of calcium carbonate that vibrate in response to sound stimuli. The chambers are connected to the environment via two small pores, the endolymphatic ducts, on the top of the shark’s head. A fourth macula, the macula neglecta, is located below an opening in the skull. The three major maculae are apparently involved in detecting low-frequency pulsed sounds, whereas the macula neglecta may provide information on the direction of the sound (Hueter & Gilbert 1991; Myrberg & Nelson 1991).

In addition to sensing vibratory cues in the surrounding medium (sound), sharks are also sensitive to minor variations in water displacement. This “distant touch” sensitivity is accomplished via mechanoreceptors distributed both along canals such as the lateral line and as independent “pit organs” scattered about the body. Distant touch sensitivity also has a directional component, suggesting that as a shark moves through the water, it can detect the presence, location, direction of movement, and relative speed of moving objects that displace water, or of stationary objects that reflect water moving off the body of the shark.

Sharks have an additional channel for sensory input that is anatomically and developmentally related to distant touch and hearing, namely electroreception (Collin & Whitehead 2004). Input for electroreception begins at numerous small pores spaced precisely on the shark’s head, snout, and mouth. The pores lead to conductive, jelly-filled canals that terminate in ampullary receptor cells termedampullae of Lorenzini (not Alloplurus of Lixiniri, as was once suggested on an ichthyology exam). The receptor cells, which are anatomically similar to hair cells of the lateral line, fi re in response to weak electric fields, sending afferent fi bers via the lateral line nerve to regions in both the mesencephalon and telencephalon of the brain. The function of the ampullae, which are an obvious external feature on most sharks, remained a substantial mystery prior to the discovery of electroreceptive capabilities in sharks.

Sensitivity to weak electric fields is an ancestral trait in bony fish lineages that was lost and then re-evolved in neopterygians (see  Electroreception). Elasmobranchs as a group have retained and fine-tuned their electrical sensitivity to a level apparently unequaled by any other animal group. Many biological activities have as an integral component the generation of weak electricity. Most notable are muscular contraction, such as heart function and breathing, nerve conduction, and the voltage created by ionic differences between protoplasm and water. A resting flatfish (Pleuronectiformes) creates a low-frequency direct current bioelectric field with a strength of more than 0.01 μV/cm (1/100th of a microvolt) measured 25 cm away.

Experiments have shown that predatory sharks use weak electrical cues, and ignore strong olfactory cues, to home in on prey. The electrical sensitivity of large sharks is truly amazing. Human sensitivity is on the order of 0.1 volt. Sharks have demonstrateddetection thresholds of 1 x10−9 V/cm, or 1 billionth of a volt, approximately 10 times more sensitive than the 0.01 μV output from prey. Such sensitivity would be suffi cient to detect the electric output of a standard D-cell fl ashlight battery several kilometers away (assuming no background geomagnetic interference), or the bioelectric output of a human 1–2 m away.

Sharks are suffi ciently electrosensitive that, theoretically, they can detect the earth’s magnetic field and currents induced by their swimming through that field. Sharks could therefore determine their compass headings during transoceanic migrations. This idea has yet to be confi rmed, although stingrays in the lab can learn to orient in uniform direct current fields weaker than the earth’s field. In learning trials, stingrays also reverse the location where they search for food when the electric field around them is artifi cially reversed, suggesting that geomagnetic cues can be used in normal daily activities (Kalmijn 1978). Magnetite in the inner ear has been implicated as a component of geomagnetic orientation (Vilches-Troya et al. 1984).

It has been noted that the ampullary electroreceptors are geometrically centered around the mouth of many elasmobranchs. This positioning could allow a shark or ray to home precisely on a potential food source solely by electroreception, effectively aligning the food in the “sights” of its receptor field and then engulfing the prey. In this way, sharks can detect prey buried in the sand or sit motionless in the dark and snap up prey that swim nearby (Kalmijn 1982; Tricas 1982).

Extreme sensitivity to environmental stimuli is of no use to an animal unless the information can be collected, processed, and acted upon. Such integration is the role of the central nervous system, particularly the brain. Not surprisingly, the ratio of brain to body weight in sharks is greater than for most bony fishes, except perhaps the electrogenic elephantfishes. 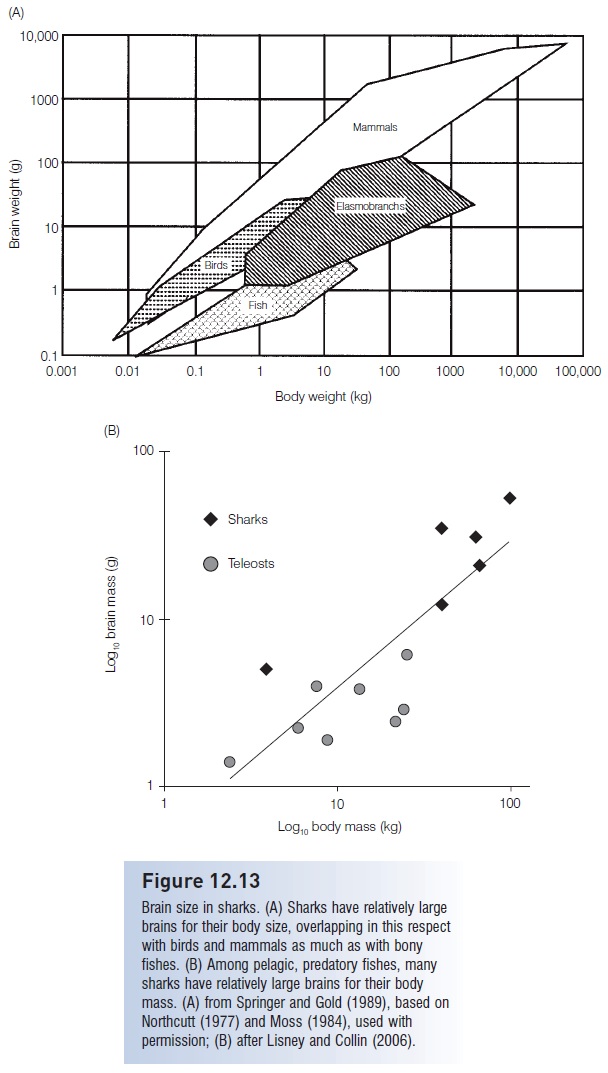 The ratio of brain to body weight in sharks is actually more comparable to that of “higher animals” such as some birds and marsupials (Fig. 12.13A). Within feeding types and habitat zones, many sharks have larger brains than ecologically comparable bony fishes such as pelagic, predatory billfishes and tunas, which in fact have relatively large brains relative to other teleosts (Lisney & Collin 2006) (Fig. 12.13B). Requiem and Mackerel sharks have large forebrains and complex cerebellums; eagle rays and other stingrays have the most complex brains (Northcutt 1977).