Home | | The Diversity of Fishes: Biology Evolution and Ecology | Reproduction and development - Subclass Elasmobranchii
Posted On :  07.08.2017 09:55 am

A few generalizations can be made about shark reproduction.

A few generalizations can be made about shark reproduction. Ages at maturation vary widely among shark species but are typically older than for most teleosts. Most sharks mature in 6–l8 years, although much greater ages are not uncommon. For example, Lemon Sharks (Negaprion brevirostris) in south Florida mature at an average of 24 years, and Spiny Dogfish (Squalus acanthias) in British Columbia mature at an average age of 35 years (Saunders & McFarlane 1993). Longer lived species tend to mature at greater ages: sawfishes at 10 years old, Angel Sharks and Common Skates at 11 years old, Nurse and Whale Sharks at 16–25 years, and some dog sharks at 30 and 45 years (Cailliet & Goldman 2004).

Sharks produce relatively few, large young with a long gestation period. Newborns are small replicas of the adults; no larval stage exists. No parental care is given after egg laying or birth, with the possible exception of a bullhead shark (Heterodontidae) in which the female picks up her recently laid eggs in her mouth and wedges them in crevices in rocks or plants.

Fertilization in all sharks is internal, and has been throughout the known evolutionary history of the class.Male sharks possess intromittent organs in the form of modified pelvic fins termed myxopterygia or claspers (the term “claspers” apparently arose from Aristotle’s misconception that the structures were used to hold the female, rather than to inseminate her). Females of some species can store sperm in the shell gland for years. Maternal–embryo relationships in advanced sharks rival that in mammals,contrasting sharply with the simpler reproductive features of most bony fishes (see  Parental care).

Although fertilization is internal, postfertilization development and embryonic nutrition vary among taxonomic groups (Wourms et al. 1988; Compagno 1990b; Pratt &Castro 1991; Wourms & Demski 1993a; Musick & Ellis 2005). The major contrasts involve whether young develop internally or externally and whether and how the mother provides nutrition for the growing embryo (Table 12.1). The ancestral condition in chondrichthyans, and the most common condition among extant species, is viviparity, or live-bearing (Musick & Ellis 2005). In about half of livebearing species, the developing embryo is retained in the uterus and nourished with yolk provided by a yolk sac that is attached directly to the digestive system of the embryo (termed variously yolk sac, lecithotrophic, or aplacental viviparity, and also ovoviviparity).

Some viviparous sharks have evolved an additional form of nourishment. After about 3 months, yolk reserves are exhausted and the young then feed directly on eggs ovulated by the female (oophagy). Oophagous sharks include Threshers, Whites, Makos, and Sand Tigers. Sand Tigers have carried this one step further. The first embryo to consume its yolk then turns on its siblings and eats them (embryophagy) before assuming an oophagous existence (Gilmore et al. 1983; Gilmore 1991). At birth, Sand Tiger litters are composed of two large (1 m long) young, one in each uterus.

The most complex developmental pattern, placental viviparity, characterizes advanced members of the most diverse modern family of sharks, the Carcharhinidae, as well as the closely related hammerheads (Sphyrnidae). Yolk is consumed and then the spent yolk sac attaches to the uterine wall to form a yolk-sac placenta. In a construction strongly analogous to the mammalian condition (although involving different embryonic tissues), the stalk of the yolk sac, which is attached to the embryo between the pectoral fins, forms an umbilical cord that transports nutrients and oxygen to the embryo and carries metabolic wastes to the mother. In some sharks, such as the Sharpnose and hammerheads, the umbilical cord diversifi es further and develops appendicula or outgrowths that serve as additional sites for exchange of materials, including uptake of nutrients in histotroph or “uterine milk” secreted by special cells in the wall of the uterus (Fig. 12.14). Uterine milk may be absorbed through the skin and mouth and also via modified gill filaments that exit from the spiracle and gill slits of the developing embryo. In the myliobatoid stingrays and manta rays, nourishment is solely via ingestion of uterine milk without a placental connection (uterine viviparity). Clutch sizes in viviparous sharks range from two (Sand Tigers, threshers, Longfin Mako) to as many as 70–135(Tiger and Blue Sharks), with an average of around 8–10 (Branstetter 1990). Whale Sharks, once thought to be oviparous, have been found with as many as 300 embryos inside, making that species the most fecund shark known. A gravid female may contain smaller embryos still in their egg cases, whereas larger individuals are free-living.

A summary of embryonic development and nutrition in chondrichthyans. From Nelson (2006), after Musick and Ellis (2005). 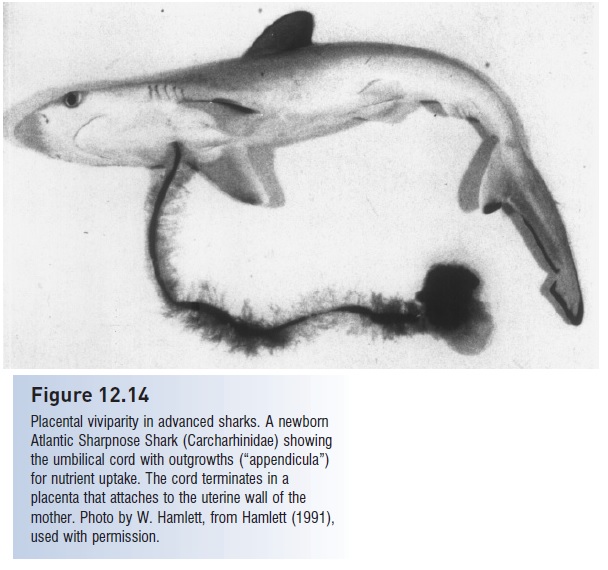 Placental viviparity in advanced sharks. A newborn Atlantic Sharpnose Shark (Carcharhinidae) showing the umbilical cord with outgrowths (“appendicula”) for nutrient uptake. The cord terminates in a placenta that attaches to the uterine wall of the mother. Photo by W. Hamlett, from Hamlett (1991), used with permission.

Gestation periods in sharks average 9–12 months, but may be as short as 3 or 4 months (Bonnethead) or as long as 2 years (Spiny Dogfish) to perhaps 3.5 years (Basking Shark, Frilled Shark Chlamydoselachus anguineus). Production of young apparently exacts a large energy cost on females, which appear emaciated at the end of the gestation period. Females of many species reproduce only in alternate years, suggesting it takes at least a year for the female to recover from her last clutch. Such long reproductive intervalsslow the potential rate at which shark populations can grow and thus recover from exploitation (see below, Shark conservation).

Certain accommodations must be made in live-bearing sharks to facilitate the passage of relatively large young through the birth canal. The expanded lateral lobes of the cranium of hammerhead sharks are soft and pliable at birth and then stiffen shortly after. Spines on embryonic SpinyDogfish are covered with pads of tissue until after the young are born. The saw of fetal sawfish is at first soft and contained in a rubbery envelope to protect both the rostrum and the mother during gestation and birth.

The alternative condition is egg-laying (oviparity), with the embryo deriving all nutrition from its large yolk reserves. About 40% of living elasmobranchs are oviparous, including bullhead sharks (Heterodontiformes), many nurse sharks (Orectolobiformes), as well as all skates (Rajiformes). Clutch sizes among oviparous sharks and batoids both average about 60 eggs per year (Musick & Ellis 2005). Unlike bony fish eggs, shark and skate egg cases, termed mermaid purses, are large (2–4 cm) and are protected by a tough, keratinoid (horny) shell secreted by a maternal nidamental or shell gland. The egg case, which contains a single embryo, is attached to seaweeds or other structures and the embryo develops for a relatively long period (several weeks to 15 months) and emerges at a relatively large size.

The protective nature of mermaid purses is attested to by instances of their being transported in air for several days and still hatching out healthy young (Lagler et al. 1977). However, mermaid’s purses are not free from predation. They have been found in the stomachs of other sharks, flatfishes, and elephant seals, and are actively preyed upon by boring gastropod mollusks such as whelks (Cox & Koob 1993). A small number of sharks in these orders retain the encased eggs in the oviduct before laying them (termed retained oviparity). Clutch size in oviparous sharks is difficult to assess because females may lay two eggs at a time repeatedly over several months (Lineaweaver & Backus 1970).

Regardless of maternal–embryo relationships, courtship and copulation commonly involves the male holding the female in his teeth while the claspers are inserted (Pratt & Carrier 2001). This pattern has been observed in a half dozen sharks and an equal number of batoids and is inferred from bite marks in many others. Bite scars are common on the pectoral fins and fl anks of adult females but appear todo little actual damage because the skin of females is typically much thicker than that of males. In Blue Sharks, the female’s skin is three times as thick as the male’s and, moreimportantly, thicker than the male’s teeth are long (Fig. 12.15). In some ray species, males develop more pointed dentition upon maturation and during the mating season. Males may also use their electrosensory system to detect responsive females, as has been shown in the Round Stingray Urolophus halleri (Tricas et al. 1995). 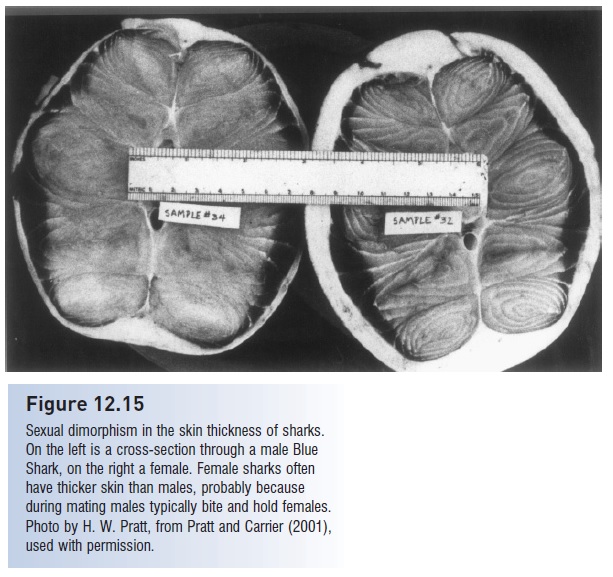 Sexual dimorphism in the skin thickness of sharks.On the left is a cross-section through a male Blue Shark, on the right a female. Female sharks often have thicker skin than males, probably because during mating males typically bite and hold females. Photo by H. W. Pratt, from Pratt and Carrier (2001), used with permission.