Most elasmobranchs are marine organisms of relatively shallow temperate and particularly tropical waters, although all oceans except the Antarctic have one or more species.

Most elasmobranchs are marine organisms of relatively shallow temperate and particularly tropical waters, although all oceans except the Antarctic have one or more species. Most inhabit continental and insular shelves and slopes: 50% of all species occur in <200 m of water and 85% occur in <2000 m. Only about 5% dwell in the open ocean, including a few myliobatiforms such as manta rays; another 5% occupy fresh water. Truly cold water, high-latitude sharks (not counting those that live in the perpetually cold, deep sea) are limited to the relatively large hexanchids (Sixgill Shark), Basking Shark and sleeper sharks (Cetorhindae, Somniosidae), smaller squaliform sharks, and some catsharks (Scyliorhinidae).

Although bony fishes inhabit ocean depths to 8000 m (see  The deep sea), sharks do not occur as deep. Deepsea sharks, those frequently captured in aphotic (lightless) waters below 1000 m, include several squaliform species (Portuguese, kitefin, lantern, sleeper, and rough sharks), carcharhiniform cat and false catsharks, and the Sixgill. Record depths include sightings of the Portuguese Shark, Centroscymnus coelolepis, at 3690 m (Clark & Kristof 1990); an unidentified spiny dogfish at 4050 m; and a disputed depth of 9938 m for the squalid Euprotomicrus bispinatus (see Herdendorf & Berra 1995). But these are exceptional occurrences because Chondrichthyes in general seldom occur in abyssal regions deeper than 3000 m, probably because of low food supplies and the high metabolic costs of maintaining a large, oil-rich liver used to maintain buoyancy (Priede et al. 2006). Hence sharks are restricted from 70% of the world’s ocean volume and have no natural deepwater refuges from human exploitation.

Sharks have also failed to occupy other habitats characterized by environmental extremes of temperature, oxygen, turbulence, drought, and salinity, unlike bony fishes. Among the few exceptions are Pentanchus cat sharks that inhabit deep water basins that are characterized by relatively low oxygen levels and relatively high temperatures and salinities. These species have elongate gill regions and expanded gill filaments (Compagno 1984).

Although the ocean is home to most elasmobranchs, at least 170 species in 34 families are capable of entering estuarine and freshwater habitats, and 47 species are restricted to such regions (Martin 2005). Two families of rays – the Potamotrygonidae and Dasyatidae – contain truly freshwater fishes, seldom if ever entering marine conditions (Compagno 1990b). The potamotrygonid river stingrays include about 21 species restricted to fresh waters of Atlantic drainages of South America. Eight species of dasyatid whiptail stingrays in the genera Dasyatis and Himantura are restricted to rivers in Africa, Southeast Asia, New Guinea, and Australia, and another six dasyatid species are euryhaline, spending most of their lives in fresh water (Martin 2005). Included among the obligate freshwater forms is the Giant Freshwater Stingray or whipray, Himantura chaophraya of tropical Australia, New Guinea, Borneo, and Thailand (Fig. 12.4). H. chaophraya may be the world’s largest stingray and perhaps the world’s largest freshwater fish, reaching a length of 5 m, a width of 2.4 m, and a mass of 600 kg (Roberts & Monkolprasit 1990; Compagno & Cook 1995a). 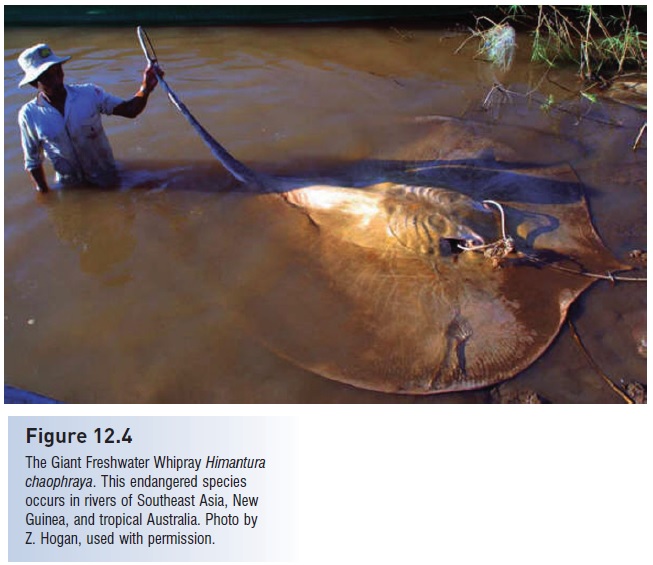 Among selachians, three species of carcharhinid river sharks in the genus Glyphis are obligate freshwater inhabitants of rivers in India, Borneo, and tropical Australia. A few  carcharhinid sharks enter fresh water periodically, the most notable example being the Bull Shark, Carcharhinus leucas. Bull Sharks have been captured as far as 4200 km up the Amazon River, and also more than 1200 km up the Mississippi River at Alton, Illinois (Thorson 1972; Moss 1984). Bull Sharks regularly traverse the 175 km long Rio San Juan between the Caribbean Sea and Lake Nicaragua in Central America, and occur in other rivers and lakes of Mexico and Central and South America. Bull Sharks are the most likely perpetrators of attacks on humans in rivers worldwide (e. g., Coad & Papahn 1988). Finally, six species of pristid sawfishes (Batoidea) are strictly euryhaline. These include the Largetooth Sawfish, Pristis perotteti, which also moves regularly between lakes and the ocean in Central and South America and has established genetically distinct, reproducing populations in some lakes (Montoya & Thorson 1982; Thorson 1982) (Fig.12.5).

Sharks and sawfishes that move freely between marine and fresh water are able to adjust the osmotic concentration of their blood appropriately. Whereas in salt water the major problem is salt accumulation and water loss, in fresh water the problems reverse (see  Osmoregulation, ion and pH balance, and excretion). A Bull Shark in fresh water reduces the salt concentration of its blood by about 20% and urea concentration by about 50%. This cuts osmotic pressure of the blood in half, to about 650 mOsm. To accommodate additional water flowing in from the environment due to osmotic pressure, urine production increases 20-fold. Salt concentration of the urine is reduced by the same factor, thus conserving salts. The rectal gland, which functions in salt water to secrete excess NaCl back into the environment, shuts down. All of these changes are quickly reversed upon return to the ocean. 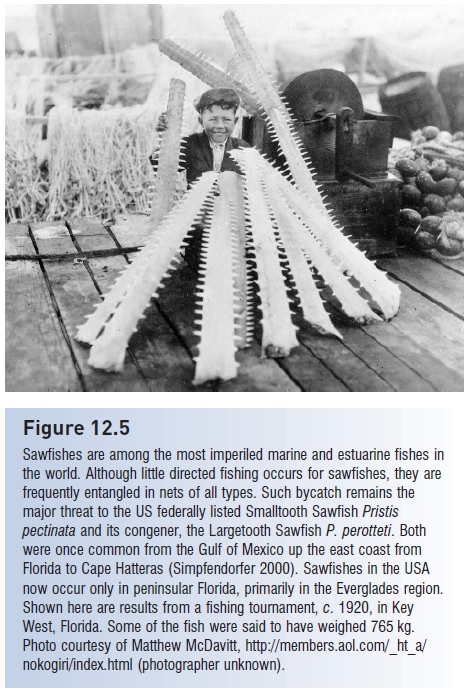 Sawfishes are among the most imperiled marine and estuarine fishes in the world. Although little directed fishing occurs for sawfishes, they are frequently entangled in nets of all types. Such bycatch remains the major threat to the US federally listed Smalltooth Sawfish Pristis pectinata and its congener, the Largetooth Sawfish P. perotteti. Both were once common from the Gulf of Mexico up the east coast from Florida to Cape Hatteras (Simpfendorfer 2000). Sawfishes in the USA now occur only in peninsular Florida, primarily in the Everglades region. Shown here are results from a fishing tournament, c. 1920, in Key West, Florida. Some of the fish were said to have weighed 765 kg. Photo courtesy of Matthew McDavitt.

The truly freshwater potamotrygonid stingrays are restricted to low salinity conditions. Unlike all other chondrichthyans, they have lost the ability to concentrate urea (although the enzymes for urea production still occur in their livers) and they lack functioning rectal glands. These stingrays die in water with more than 40% the salt concentration of sea water (about 15 ppt salt). More typical marine elasmobranchs, including those that spawn in estuaries, can survive salinities as low as 50% of sea water if acclimated slowly. Unlike Bull Sharks, these typical elasmobranchs achieve an osmotic balance by reducing only the urea concentration of their blood, without reduction in salt concentration (Thorson et al. 1967, 1973; Moss 1984; Thorson 1991).

Because humans and their destructive activities are concentrated along rivers and estuaries, freshwater and estuarine elasmobranchs – as top predators with typical and vulnerable elasmobranch life histories – are even more threatened than is generally the case for chondrichthyans (Compagno & Cook 1995b; Martin 2005; see below, Shark conservation). The Giant Freshwater Stingray is listed as Vulnerable by the International Union for the Conservation of Nature (IUCN 2004; www.redlist.org) due to directed and bycatch fishing, habitat destruction, and range fragmentation from dams; Compagno and Cook (1995a) suggested that its status be elevated to Critically Endangered. Of the 47 obligate euryhaline and freshwater elasmobranch species, fully 18 have been assigned to high-risk categories (Critically Endangered, Endangered, or Vulnerable) by the IUCN (2004); another five are Data Defi cient, indicating insufficient information to determine their status (Martin 2005).