Bacteria can be studied either in unstained (wet mount) or stained preparation.

Bacteria can be studied either in unstained (wet mount) or stained preparation.

Stained preparations are used to demonstrate structuraldetails of the bacteria by producing color contrast.

The common staining techniques used in diagnostic microbiology are discussed below:

Methylene blue and basic fuchsin are the simple stains that provide color contrast but impart the same color to all the bacteria in a smear.

Bacteria are mixed with dyes, such as Indian ink that produces a uniform dark-colored background against which the unstained organisms stand out in contrast. This is used for demonstration of bacterial capsule that are usually not stained by simple stains. India Ink method for demonstration of the fungus Cryptococcus neoformans is a common example.

Cells and structures that are too thin to be visualized by the light microscope can be rendered visible by impregna-tion of silver on their surface. Silver impregnation method is a common method used for staining spirochetes, such as T. pallidum,Leptospira,Borrelia, etc.

Gram stain: Gram stain was devised by Christian Gram, a Danishmicrobiologist, in 1884, as a convenient method for classifying bac-teria. The Gram staining method essentially consists of four steps:

2.     Application of mordant in the form of dilute solution of iodine.

4.     Counterstaining with acidic dyes, such as carbolfuchsin,safranine, or neutral red.

There are certain groups of bacteria, such as Mycobacterium tuber-culosisand Mycobacterium leprae, that cannot be considered typi-cal Gram-negative or Gram-positive bacteria. This is because these bacteria either do not take up the Gram stain or they have a different type of envelope. These mycobacteria possess a waxy envelope containing complex glycolipids that make them impervious to the Gram stain. Gram stain also provides useful information on the structure of bacterial cell envelope.

Acid-fast stain: The acid-fast stain was discovered by Ehrlich,who found that after staining with aniline dyes, tubercle bacilli resist decolorization with acid. The method, subsequently, was modified by Ziehl and Neelsen, hence is widely known as Ziehl– Neelsen (ZN) stain.

Acid fastness is due to the (a) high content of lipids, fatty acids, components of mycolic acid, and (b) higher alcohols found in the cell wall of the Mycobacterium. Acid fastness also depends on integrity of the cell wall. The ZN smear is best used for staining:

·        Oocysts of intestinal coccidian parasites (such as Cryptospo-ridium, Cyclospora,Isospora, etc.).

Albert’s stain: Albert’s stain is used for staining the volutingranules of C. diphtheriae. These granules have an affinity for basic dyes and are called metachromatic granules. These gran-ules are stained bluish-black against green protoplasm on staining by Albert’s stain.

Depending on their shape, bacteria are classified into several types (Fig. 2-6):

Bacilli: The bacilli (bacillus,rod) are rod shaped. These bacillimay show either of the following arrangement:

1.     Coccobacilli: Length of the bacteria is approximately the sameas its width, e.g., Brucella. 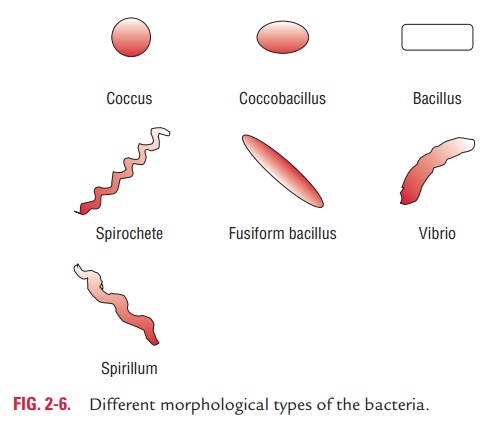