The outer layer or cell envelope provides a structural and physi-ological barrier between the protoplasm (inside) of the cell and the external environment. 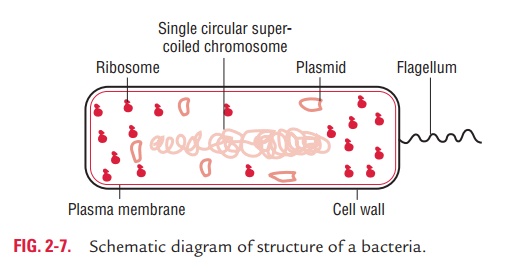 Sporulation is a primitive process of differentiation with formation of endospores, a highly resistant resting phase of some of the bac-teria (e.g., spores of aerobic Bacillus spp. and anaerobic Clostridium spp.). The organism survives in spores, a dormant state, for longer period of starvation and other adverse conditions.

Sporulation process begins in nutrition deprived conditions. Itbegins with the formation of an axial filament. The process continues with infolding of the membrane so as to produce a 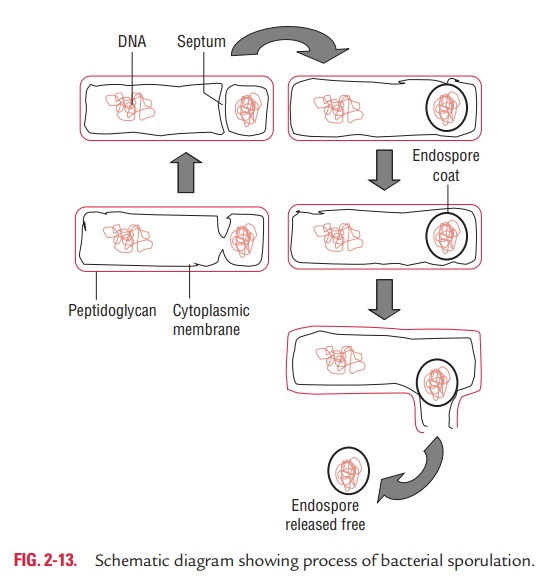 double membrane structure whose facing surfaces correspond to the cell wall-synthesizing surface of the cell envelope. The growing points move progressively toward the pole of the cell so as to engulf the developing spore. Two spore membranes then engage in the active synthesis of special layers that form the cell envelope: the spore wall and the cortex, lying outside the facing membranes. In the newly isolated cytoplasm, or core, many vegetative cell enzymes are degraded and are replaced by a set of unique spore constituents. During the process of sporulation, each cell forms a single internal spore; the spore germinates to produce a single vegetative cell (Fig. 2-13).

Morphology: The endospores are a highly resistant restingphase of bacteria. The spore shows following structures.

a.     Core:The core contains a complete nucleus (chromosome),all of the components of the protein-synthesizing apparatus, and an energy-generating system based on glycolysis. The heat resistance of spores is due in part to their dehydrated state and in part to the presence of large amounts (5–15% of the spore dry weight) of calcium dipicolinate in the core.

b.     Spore wall:This is the innermost layer surrounding theinner spore membrane. It contains normal peptidoglycan and becomes the cell wall of the germinating vegetative cell.

c.      Cortex:It is the thickest layer of the spore envelope containingunusual peptidoglycan. It is extremely sensitive to lysozyme, and its autolysis plays a role in spore germination.

d.     Protein coat:It is composed of a keratin-like protein con-taining many intramolecular disulfide bonds; this layer confers relative resistance to antibacterial chemical agents due to its impermeability (Fig. 2-14). 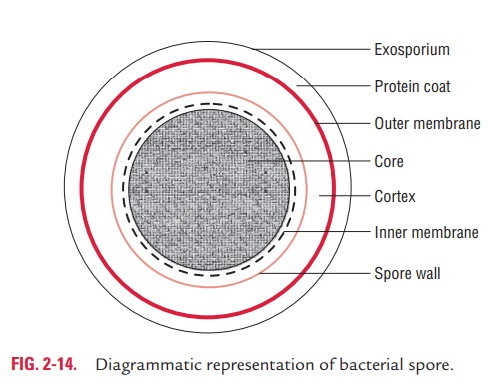 The spores may vary among different species depending on the position, shape, and relative size of the spores. For example, spores may be central, subterminal or terminal; may be oval or spherical in shape; and may be bulging or nonbulging.

Demonstration of spores: Spores are most simply observedas intracellular refractile bodies in unstained cell suspensions or as colorless areas in cells stained by conventional methods, such as Gram staining. Spores are commonly stained with malachite green or carbolfuchsin. On staining by modified ZN stain (using 0.25–0.5% sulfuric acid instead of 20% sulfuric acid), the spores appear as red acid-fast bodies.

Properties of spores: Bacterial spores are resistant to ordinaryboiling, disinfectants, and heating. Spores of all medically important bacteria are destroyed by autoclaving at 1218C for 15 minutes. The process of conversion of a spore into vegetative cell under suitable conditions is known as germination. The germination process occurs in three stages: activation, initiation, and outgrowth.