The reaction of plants facing stress is called strain.

Like all other organisms, plants are also subjected to various environmental stresses such as water deficit, drought, cold, heat, salinity and air pollution. The study of functioning of plants under adverse environmental conditions is called stress physiology. Jacob Levitt (1972) first used the term biological stress in relation to plants and according to him stress is “any change in environmental condition that might adversely change the growth and development of a plant”.

The reaction of plants facing stress is called strain. For example, if a normal plant growing under favourable light conditions is subjected to low light intensity, its photosynthesis is reduced. Thus, low light intensity is referred as stress and reduction of photosynthesis is referred as strain. Biological strains are of two types; Elastic biological strain and Plastic biological strain. If the reaction of plant function is temporary and when it returns to its original state it is called elastic biological strain. Example: Temporary wilting. If the reaction is permanent and the plant function does not return to the normal state it is called plastic biological strain. Example: Permanent wilting. Some plants get adapted to stress condition and are not adversely affected by stress. Such plants are called stress resistant or stress tolerant plants. Example: Mangroves. Some plants cannot face stress and they pass their adverse period in dormant state and so they are called stress enduring plants. Ephemeral plants are short lived desert plants, which complete their life cycle during the seasonal rains before the onset of dry season. These ephemeral plants are called stress escapers. Stress in plants can be classified as given in figure 15.31. 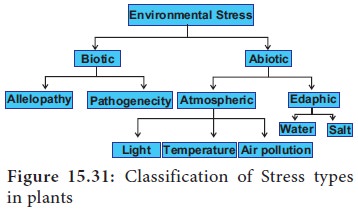 These are adverse effects on plants caused by other living organisms such as viruses, bacteria, fungi, parasites, insects, weeds and competing plants.

Biotic environmental stress is also caused due to the activity of man by cutting herbs and trees, twigs for fodders, fuels and agricultural purposes. The biotic stresses caused by bacteria, fungi and nematodes that are ever present in the environment are called potential biotic stresses. These are divided into two types. They are:

An organism producing one or more biochemical substances that greatly influence the germination, growth and reproduction of other organisms is called Allelopathy. These biochemicals are known as allelochemicals. They are beneficial (positive allelopathic) or detrimental (negative allelopathic). These allelochemicals are obtained from leaf after leaching on the ground and also from roots. The term allelopathy is from Greek words allelon-each other and pathos-to suffer and first used in 1937 by Hans Molisch. Allelopathic effect may occur with weeds on crops and vice versa (Figure 15.32). 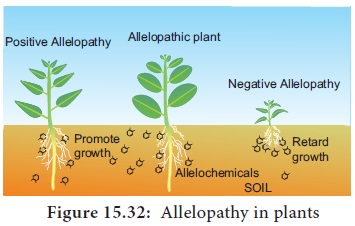 One of the most famous allelopathic plants is Black walnut (Juglans nigrum). The chemical which is present in Black walnut is Juglone and it is a respiratory inhibitor. Solanaceous plants such as tomato, capsicum and eggplant are susceptible to juglone. These plants when exposed to these allelochemicals exhibit symptoms such as wilting, chlorosis and death.

Tree of heaven (Ailanthus altissima) is a recent addition to the list of allelopathic trees. Ailanthone an allelochemical extracted from the root of Ailanthus acts as potent herbicide. In Sorghum plant the allelochemical sorgolone possess allelopathic activity. It is found in root exudates of most Sorghum species. Root exudation of maize inhibits the growth of some weeds such as Chenopodium album and Amaranthus retroflexus. The seed exudates of oat (Avena fatua) affect the germination of wheat seedling.

The effect of microbes that cause diseases in plants. Example: Xanthomonas citri

Plants are adapted to a particular region and they face temperature stress in another region.

High temperature causes soil and atmospheric drought. Plants are subjected to permanent wilting in soil drought and temporary wilting in atmospheric drought. Plants generally die above temperature of 44oC. However, some organisms like Mastigocladus (a cyanobacterium) grow well at 85 oC to 90oC in hot springs. At 42oC synthesis of normal protein declines and new protein called Heat Shock Proteins (HSPs) appears. These proteins were discovered in fruit fly (Drosophila melanogaster) and since then they have also been discovered in animals, plants and microorganisms. At high temperature all physiological processes decline. Photosynthesis decreases and respiration increases. So, plants face a shortage of organic substances.

Low temperature stress is quite harmful to plants and the temperature near freezing point causes irreversible damage so that the plants fail to survive under extreme cold conditions. However, some plants growing in alpine and arctic regions can survive under low temperature and such plants are said to be cold resistant. Stress due to freezing temperature is called frost stress. Temperature below 10oC, decreases root growth, increases leakage of ions and ethylene production.

They are divided into two types. They are water stress and salt stress:

The temporary inundation of plants and its parts by flooding causes oxygen deficiency to the roots and soil borne microorganisms. Effects of flooding are as follows: Nitrogen turnover in the soil is reduced; Abscisic acid, ethylene and ethylene precursors are formed in larger amount; Stimulation of partial stomatal closure, epinasty and abscission in leaves; Cellular membrane systems break down, mitochondria and microbodies disintegrate and enzymes are partially inhibited. Flood tolerant plants include those found on permanently wet soils. Examples: Marsh plants, shore plants and hydrophytes. Tree species found dominant in flooded sites are also tolerant. Examples: Taxodium disticum, Mangroves and palms are tolerant to flood stress.

The term ‘drought’ denotes a period without appreciable precipitation, during which the water content of the soil is reduced to such an extent that plants suffer from water deficiency. Effects of drought are as follows: Decrease in cellular growth and synthesis of cell wall components cause the cells to become smaller in size; Nitrogen fixation and its reduction are decreased by decreasing the activity of certain enzymes; Increase in abscisic acid level ultimately closes down the stomatal apparatus to the minimum, hence, transpiration declines; Protochlorophyll formation is inhibited and photosynthetic process declines; Levels of proline increases; Respiration and translocation of assimilates decreases; Loss of water leads to increase in the activity of hydrolytic enzymes, followed by destruction of RNA and disruption of protein; Wilting in mature leaves is associated with carbohydrate depletion due to mobilization export, followed by leaf senescence.

Xerophytes are well adapted for drought either because,

i. the protoplasm of such plants does not die when it faces extreme or prolonged desiccation (dehydration) hence, it tolerates or endures such conditions. Example: Creosote bush (Larrea tridentata) can survive water content drops upto 30% whereas, in most plants the lethal level is below 50–70% or these plants are able to avoid or postpone the lethal level of desiccation because they have developed structural or physiological adaptations. Plants that avoid or postpone desiccation have evolved an alternative path by developing following mechanisms: Improved water uptake by roots which penetrate deep down up to the water source; Efficient water conduction by increasing and enlarging the conductive tissues in terms of producing more number of xylem elements, dense leaf venation and reducing the transport distance (short internodes); Restriction of transpiration brought about by stomata present only on the lower epidermis and covered by dense trichomes; Rolling of leaves also help to reduce water uptake by minimizing the transpiring surface; Water storage in succulent tissue of Agave americana and other CAM plants have been found to use water conservatively.

During drought stress an essential protection mechanism that stabilizes the cell structure is induced gene expression of stress protein (dehydrin and osmotin). These proteins protect the macromolecules in the cytoplasm and in the nucleus, the cytoskeleton (biomembranes) against denaturation. High desiccation tolerance implies that the protoplasm rehydrates when water becomes available. Plants growing in deserts and arid regions are usually drought resistant.

Presence of high salt concentration in the soil restricts the growth and development of plants. Most commonly the plants which are present near the seashore and estuaries are subjected to salt stress. According to an estimate about one third of irrigated land on earth is affected by salt stress. Na+, Cl-, K+, Ca++ and Mg++ ions usually contribute to soil salinity. Plants growing in such areas face two problems:

1.           Absorption of water from the soil with negative water potential

On the basis of salt tolerance, they are grouped into two categories:

Halophytes are native to saline soils. The halophytes which can resist a range of salt concentration are called as euryhaline and those with narrow range of resistance are called stenohaline. Non-halophytes cannot resist salts as the halophytes. Helianthus annus tolerates high Mn2+ ions. Those which are present in salt regions face two problems:

·            One is high concentration of salts in soil water leads to decrease in water potential so they grow in opposite direction. Example: Salicornia.

1.           Salt accumulators absorb and store salts so that the osmotic potential of their cells continues to remain negative throughout the growing region.

2.           In some salt hardy plants, the excess salt is excluded on the surface of leaves. Some plants have salt glands which secrete salt (mostly NaCl). The exuded salt absorbs water hygroscopically from the atmosphere.

3.           Some plants lose their excess salt by leaching into the soil or by dropping their salt filled leaves.

The plants growing in salty habitats like halophytes face the problem of excessive dissolved salts in the solution. Excess of salt creates comparatively more negative osmotic potential so that the plants tend to lose water into surrounding medium. Under such conditions the plants tend to lose water only when their water potential becomes more negative. It is possible only if they absorb excess of salt and accumulate it in their cell saps to maintain the same or higher concentrations as those of outside plants.

4.           Sodium chloride cannot be tolerated in the cytoplasm and it denatures several enzymes

Thus, absorption and accumulation of inorganic salts fail to solve the problem. The plants however tolerate the salt stress by synthesizing organic compounds that can exist at high salt concentrations without denaturing the enzymes. These organic compounds are called nontoxic organic osmotica. Examples: Proline and Betalin (osmoregulators).