The major site of gibberellin production in plants is parts like embryo, roots and young leaves near the tip.

The effect of gibberellins had been known in Japan since early 1800 where certain rice plants were found to suffer from ‘Bakanae’ or foolish seedling disease. This disease was found by Kurosawa (1926) to be caused by a fungus Gibberella fujikuroi. The active substance was separated from fungus and named as gibberellin by Yabuta (1935). These are more than 100 gibberellins reported from both fungi and higher plants. They are noted as GA1, GA2, GA3 and so on. GA3 is the first discovered gibberellin. In 1938, Yabuta and Sumiki isolated gibberellin in crystalline form. In1955, Brain et al., gave the name gibberellic acid. In 1961, Cross et al., established its structure.

The major site of gibberellin production in plants is parts like embryo, roots and young leaves near the tip. Immature seeds are rich in gibberellins.

The gibberellins are chemically related to terpenoids (natural rubber, carotenoids and steroids) formed by 5 -C precursor, an Isoprenoid unit called Iso Pentenyl Pyrophosphate (IPP) through a number of intermediates. The primary precursor is acetate.

All gibberellins have gibbane ring structure.

The transport of gibberellins in plants is non-polar. Gibberellins are translocated through phloem and also occur in xylem due to lateral movement between vascular bundles.

Seeds of dwarf pea are allowed to germinate till the formation of the coleoptile. GA solution is applied to some seedlings. Others are kept under control. Epicotyle length is measured and as such, GA stimulating epicotyle growth can be seen.

•             It produces extraordinary elongation of stem caused by cell division and cell elongation. 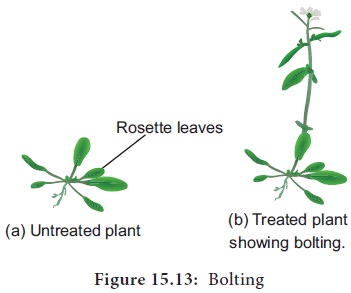 •             Many biennials usually flower during second year of their growth. For flowering to take place, these plants should be exposed to cold season. Such plants could be made to flower without exposure to cold season in the first year itself, when they are treated with gibberellins.

•               Formation of seedless fruits without fertilization is induced by gibberellins Example: Seedless tomato, apple and cucumber.

•               It promotes the formation of male flowers in cuccurbitaceae. It helps in crop improvement.

•               Promotes elongation of inter-node in sugarcane without decreasing sugar content. 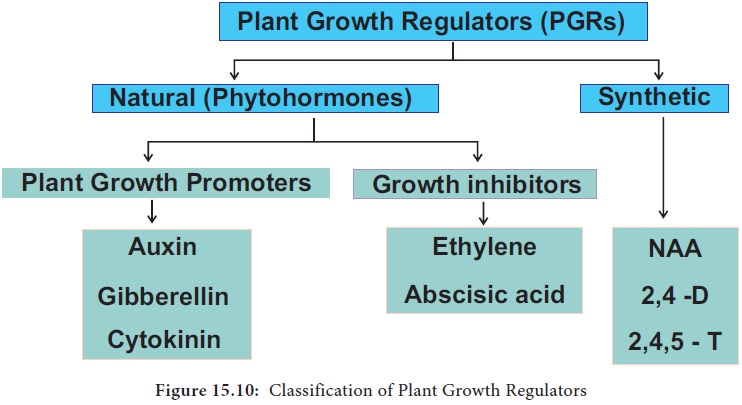