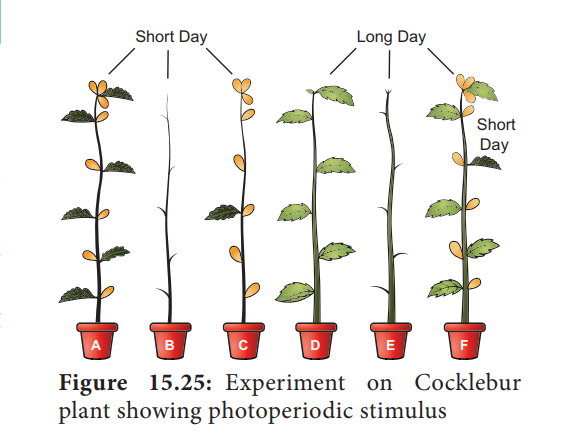 The physiological change on flowering due to relative length of light and darkness (photoperiod) is called Photoperiodism.

Trees take several years for initiation of flowering whereas an annual herb flowers within few months. Each plant requires a specific time period to complete their vegetative phase which will be followed by reproductive phase as per their internal control points through Biological Clock. The physiological mechanisms in relation to flowering are controlled by i) light  period  (Photoperiodism)  and ii) temperature (Vernalization).

The physiological change on flowering due to relative length of light and darkness (photoperiod) is called Photoperiodism. The term photoperiodism was coined by Garner and Allard (1920) when they observed this in ‘Biloxi’ variety of soybean (Glycine max) and ‘Maryland mammoth’ variety of tobacco (Nicotiana tabacum). The photoperiod required to induce flowering is called critical day length. Maryland mammoth (tobacco variety) requires 12 hours of light and cocklebur (Xanthium pensylvanicum) requires 15.05 hours of light for flowering.

1. Classification of plants based on Photoperiodism

Depending upon the photoperiodic responses plants are classified as given in Figure 15.24. 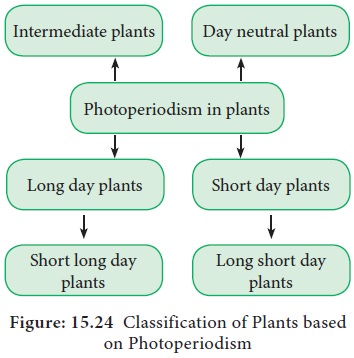 ii.           Short long day plants: These are long day plants but should be exposed to short day lengths during early period of growth for flowering. Example: Wheat and Rye.

iv.      Long short day plants: These are actually short-day plants but they have to be exposed to long days during their early periods of growth for flowering. Example: Some species of Bryophyllum and Night jasmine.

v.         Intermediate day plants: These require a photoperiod between long day and short day for flowering. Example: Sugarcane and Coleus.

vi.      Day neutral plants: There are a number of plants which can flower in all possible photoperiods. They are also called photo neutrals or indeterminate plants. Example: Potato, Rhododendron, Tomato and Cotton.

The nature of flower producing stimulus has been elusive so far. It is believed by many physiologists that it is a hormone called florigen. The term florigen was coined by Chailakyan (1936) but it is not possible to isolate.

1.           The knowledge of photoperiodism plays an important role in hybridisation experiments.

2.           Photoperiodism  is  an  excellent example of physiological pre-conditioning that is using an external factor to induce physiological changes in the plant.

Phytochrome is a bluish biliprotein pigment responsible for the perception of light in photo physiological process. Butler et al., (1959) named this pigment and it exists in two interconvertible forms: (i) red light absorbing pigment which is designated as Pr and (ii) far red light absorbing pigment which is designated as Pfr. The Pr form absorbs red light in 660nm and changes to Pfr. The Pfr form absorbs far red light in 730nm and changes to Pr. The Pr form is biologically inactive and it is stable whereas Pfr form is biologically active and it is very unstable. In short day plants, Pr promotes flowering and Pfr inhibits the flowering whereas in long day plants flowering is promoted by Pfr and inhibited by Pr form. Pfr is always associated with hydrophobic area of membrane systems while Pr is found in diffused state in the cytoplasm. The interconversion of the two forms of phytochrome is mainly involved in flower induction and also additionally plays a role in seed germination and changes in membrane conformation. 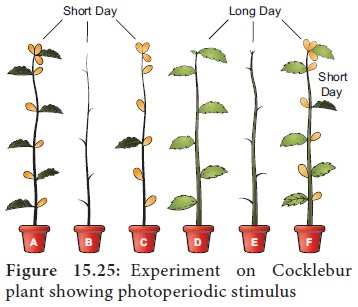 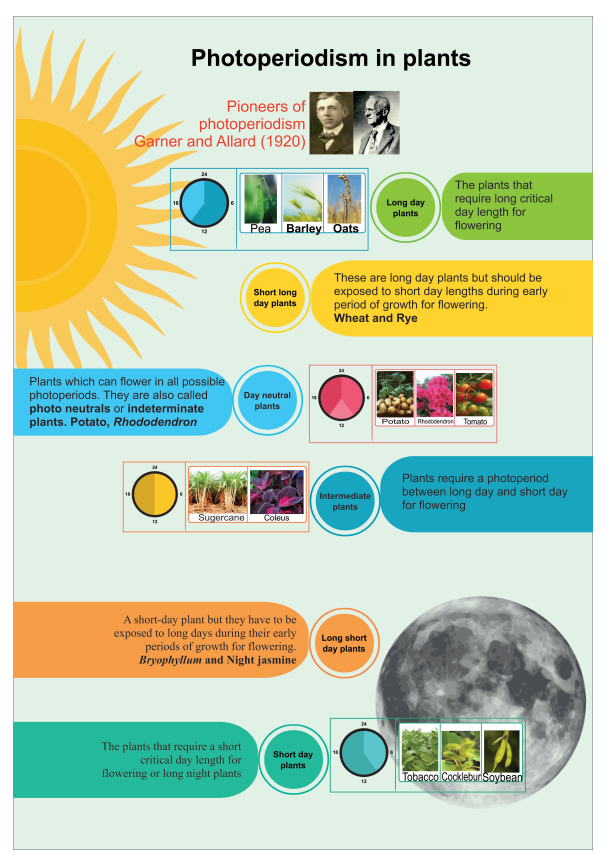