The activation and growth of embryo from seed into seedling during favourable conditions is called seed germination.

The activation and growth of embryo from seed into seedling during favourable conditions is called seed germination.

There are two methods of seed germination. Epigeal and hypogeal.

During epigeal germination cotyledons are pushed out of the soil. This happens due to the elongation of the hypocotyl. Example: Castor and Bean.

During hypogeal germination cotyledons remain below the soil due to rapid elongation of epicotyls (Figure 15.27). Example: Maize 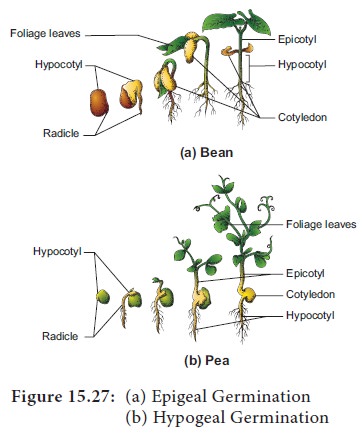 Seed germination is directly affected by external and internal factors:

a.           Water: It activates the enzymes which digest the complex reserve foods of the seed. If the water content of the seed goes below a critical level, seeds fail to germinate.

b.           Temperature: Seeds fails to germinate at very low and high temperature. The optimum temperature is 25oC to 35oC for most tropic species.

c.            Oxygen:   It   is   necessary   for germination. Since aerobic respiration is a physiological requirement for germination most will germinate well in air containing 20% oxygen.

d.           Light: There are many seeds which respond to light for germination and these seeds said to be photoblastic.

e.            Soil conditions: Germination of seed in its natural habit is influenced by soil conditions such as water holding capacity, mineral composition and aeration of the soil.

a.           Maturity of embryo: The seeds of some plants, when shed will contain immature embryo. Such seeds germinate only after maturation of embryo.

b.           Viability: Usually seeds remain viable or living only for a particular period. Viability of seeds range from a few days (Example: Oxalis) to more than hundred years. Maximum viability (1000 years) has been recorded in lotus seeds. Seeds germinate only within the period of viability.

c.            Dormancy: Seeds of many plants are dormant at the time of shedding. A detailed treatment is given below.

The seeds of most plants germinate under favourable environmental conditions but some seeds do not germinate when suitable conditions like water, oxygen and favourable temperature are not available. Germination of such seeds may be delayed for days, months or years. The condition of a seed when it fails to germinate even in suitable environmental condition is called seed dormancy. There are two main reasons for the development of dormancy: Imposed dormancy and innate dormancy. Imposed dormancy is due to low moisture and low temperature. Innate dormancy is related to the properties of seed itself.

a.           Hard, tough seed coat causes barrier effect as impermeability of water, gas and restriction of the expansion of embryo prevents seed germination.

d.           A range of temperatures either higher or lower cause dormancy.

e.            The presence of inhibitors like phenolic compounds which inhibits seed germination cause dormancy.

The dormancy of seeds can be broken by different methods. These are:

i.                  Scarification: Mechanical and chemical treatments like cutting or chipping of hard tough seed coat and use of organic solvents to remove waxy or fatty compounds are called as Scarification.

ii.                  Impaction: In some seeds water and oxygen are unable to penetrate micropyle due to blockage by cork cells. These seeds are shaken vigorously to remove the plug which is called Impaction.

iii.                Stratification: Seeds of rosaceous plants (Apple, Plum, Peach and Cherry) will not germinate until they have been exposed to well aerated, moist condition under low temperature (0oC to 10oC) for weeks to months. Such treatment is called Stratification.