Plants have the capacity for changing their positions in response to external or internal stimuli, which are known as plant movements.

Plants have the capacity for changing their positions in response to external or internal stimuli, which are known as plant movements. Movements are basically of two types: I. Vital movements and II. Physical movements (hygroscopic) (Figure 15.14). 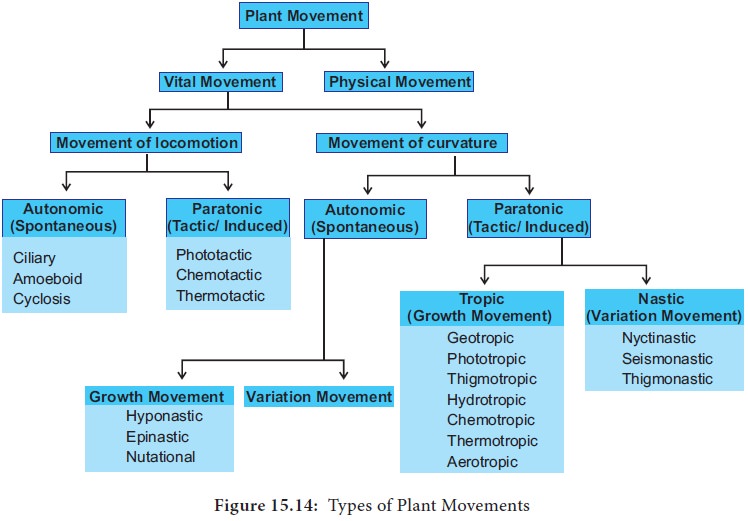 Vital movements are those which are exhibited by the living cells or plants or organs and they are always related to the irritability of the protoplasm. These movements are of two types:

A. Movements of locomotion

B. Movements of curvature

A. Movements of locomotion

These movements include the movement of protoplasm inside the cell or movement of whole unicellular or multicellular plant body as in Chlamydomonas, gametes and zoospores.

i. Autonomic movements of locomotion

The movements arising from internal changes or internal stimuli of plant body is called autonomic movements of locomotion. This movement takes place due to the presence of cilia or flagella and movement of cytoplasm (Cyclosis).

The movements due to external factors or stimuli like light, temperature and chemicals are called paratonic movement of locomotion (Figure 15.15). 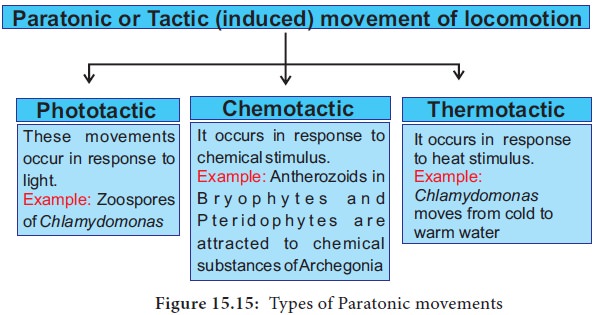 B. Movement of curvature

In higher plants they are restricted only to bending or curvature of some of their parts. There are mainly two types:

i. Autonomic movements of curvature

The movement arising from internal changes or internal stimuli of plant body is called autonomic movement of curvature. This does not require any external stimulus. They are two types:

a. Autonomic movement of growth:

It is of the following types:

1.           Hyponasty: When growth is more on lower surface, petals show curvature on upper side and ultimately the flower becomes closed. Such type of movement is called hyponasty.

2.           Epinasty: When the growth is more on upper surface, petals show curvature on the lower side and ultimately the flower opens. Such movement is called epinasty. The flower usually opens at high temperature and remains closed at low temperature (Figure 15.16).

3.           Nutation: The growth of the stem apices occurs in a zig-zag manner. It is because the two sides of the stem apex alternatively grow more. Such growth movements are called as nutational movements. In some plants nutational movements allow the shoots apex to grow in helical path in upward direction. This movement is called circumnutation. It is commonly found in the stems of climbers of Cucurbitaceae (Figure 15. 17). 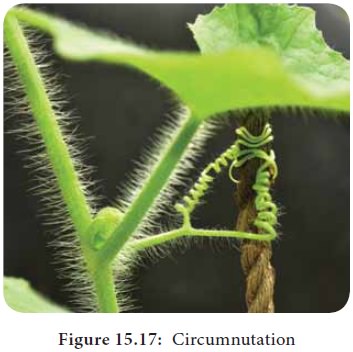 a.         Autonomic Movement of variation: It happens in Indian telegraph plant. (Desmodium gyrans).  The compound­ leaf consists of a larger terminal and two  smaller  lateral  leaflets.  During day time, the two lateral leaflets move upward at an angle of 90° and come to lie parallel to the rachis. Again, they may move downward at 180° so that they are parallel to the rachis. They may again move upward at 90° to come in their original position. All these movements occur with jerks after intervals, each movement being completed in about 2 minutes (Figure 15.18). 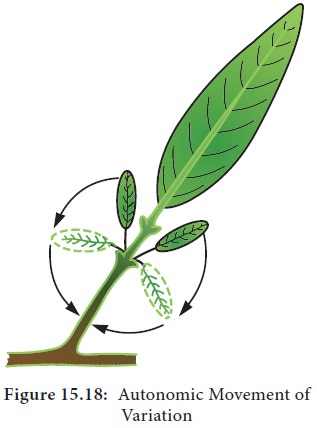 The movement arising from external stimulus is called Paratonic (Induced) movements of curvature. They are of two types. 1) Tropic movements 2) Nastic movements (Table 2) 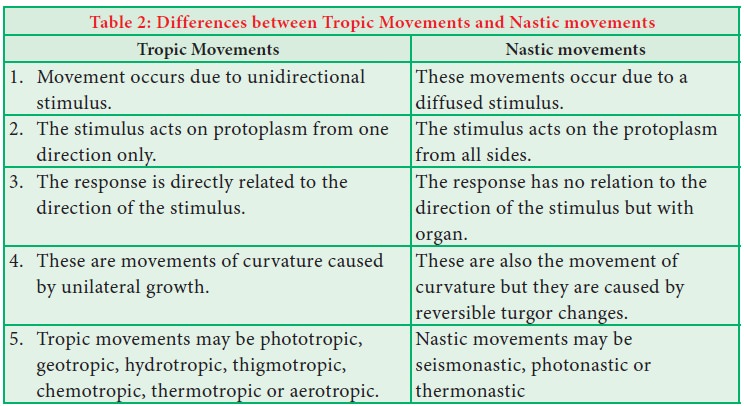 A movement that occurs in response to an unidirectional stimulus is called tropic movement or tropism.

The movements which take place in response to gravity stimulus are called geotropic movements. The primary roots growing down into soil are  positive geotropic. Primary stems that grow away from soil (against gravity) are negative geotropic. Secondary roots growing at right angles to the force of gravity are Diageotropic. Secondary lateral roots which grow obliquely downwards are Plagiogeotropic. Lateral roots and branches which are not sensitive to gravitational stimulus are Apogeotropic.

When growth movements occur in response to an external stimulus which is not unidirectional but diffused, they are called nastic or paratonic movements of ariation. Paratonic variation movements are determined by some external stimuli, light, temperature, chemicals and touch.

The diurnal (change in day-night) movements of leaves and flowers of some species which take up sleep position at night are called nyctinastic movements.

They are caused by relative changes in cell size on the opposite sides of the leaf base called pulvinus. The movements are attributed to the amount of auxin and K+ ions. The entry of water to the lower side of the pulvinus causes the leaves to stand erect and exit of water causes them to drop. They are of two types:

The nastic movement caused in response to light is called photonasty or photonastic movement. The opening of leaves and flowers during daytime and their close at night is an example.

This means a response to shaking. The best example is Mimosa pudica (Touch-me-not plant) which is a sensitive plant (Figure 15.21). 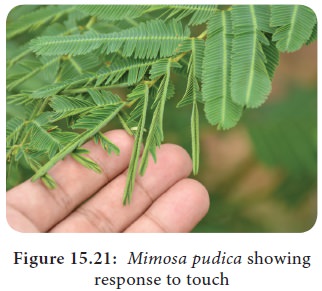 Such plants respond to stimuli such as touch, blow or metallic shock by folding their leaflets and lowering their leaves .This effect is caused by the movement of water in and out of the parenchymatous cells of the pulvinus (Figure 15.22). 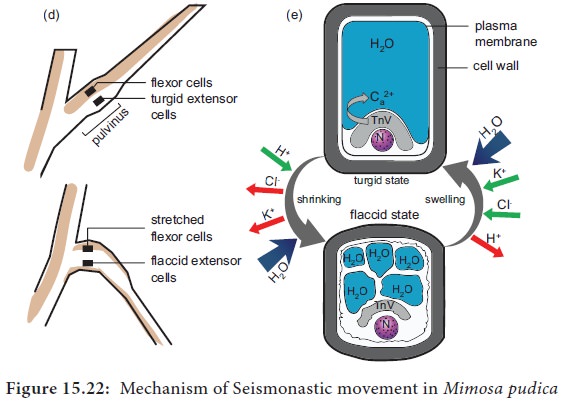 The movements found in the leaves of Drosera and Dionaea (Venus fly trap) result in response to the touch stimulus of insects. As soon as an insect sits on the leaf the cilia curve inward to trap the insect and trigger hairs are activated. 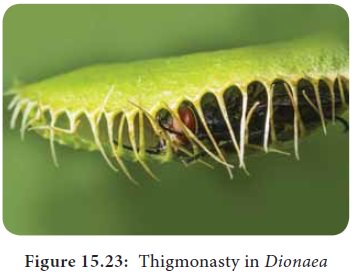 Similarly, in dionaea, the two halves of the leaf curve upwards along the midrib. These parts of the leaves come to their normal position after the insect has been digested (Figure 15.23).

The Clinostat has a rotating pot like container mounted on an axis rod. A potted plant is fitted horizontally on the Clinostat and rotated slowly which completely eliminates gravity as all the sides of the plant are equally stimulated. If the rotation of the Clinostat is stopped for a considerable period of time then the tip of the stem is observed to curve and grow upwards this proves that the stem tip is negatively geotropic (Figure 15.19). 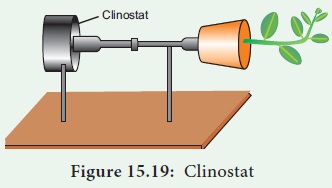 A darkened black box is taken having a small window on one side. A wellwatered potted plant is placed inside the box. This is referred to as a phototropic chamber or heliotropic chamber. If the window is kept closed for about 24 hours the plant shows normal growth. If the window is kept opened, it is found after two days that the shoot tip bends and grows towards light proving that it is positively phototropic (Figure 15.20). 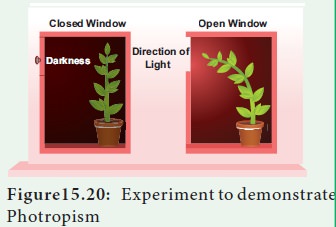