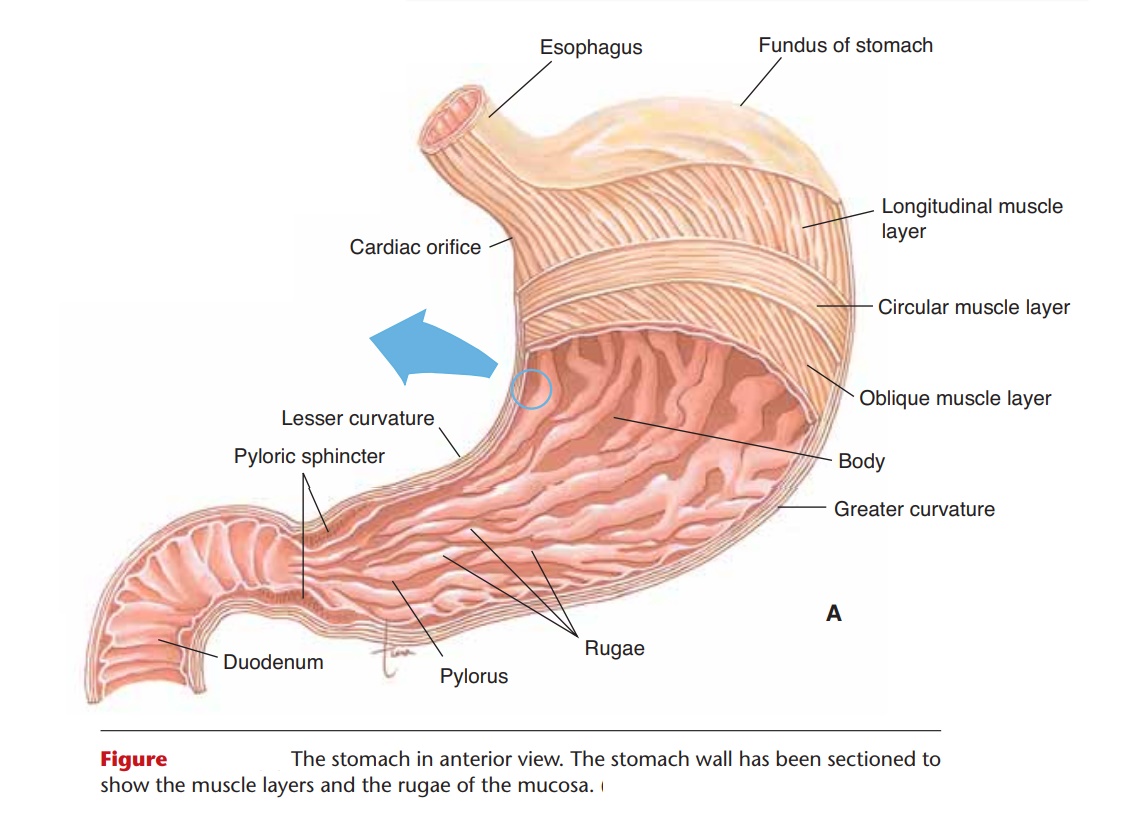 The stomach is located in the upper left quadrant of the abdominal cavity, to the left of the liver and in front of the spleen.

The stomach is located in the upper left quadrant of the abdominal cavity, to the left of the liver and in front of the spleen. Although part of the alimentary tube, the stomach is not a tube, but rather a sac that extends from the esophagus to the small intestine. Because it is a sac, the stomach is a reservoir for food, so that digestion proceeds gradually and we do not have to eat constantly. Both mechanical and chemical digestion take place in the stomach.

The parts of the stomach are shown in Fig. 16–5. The cardiac orifice is the opening of the esophagus, and the fundus is the portion above the level of this opening. The body of the stomach is the large central portion, bounded laterally by the greater curvature and medially by the lesser curvature. The pylorus is adja-cent to the duodenum of the small intestine, and the pyloric sphincter surrounds the junction of the two organs. The fundus and body are mainly storage areas, whereas most digestion takes place in the pylorus. 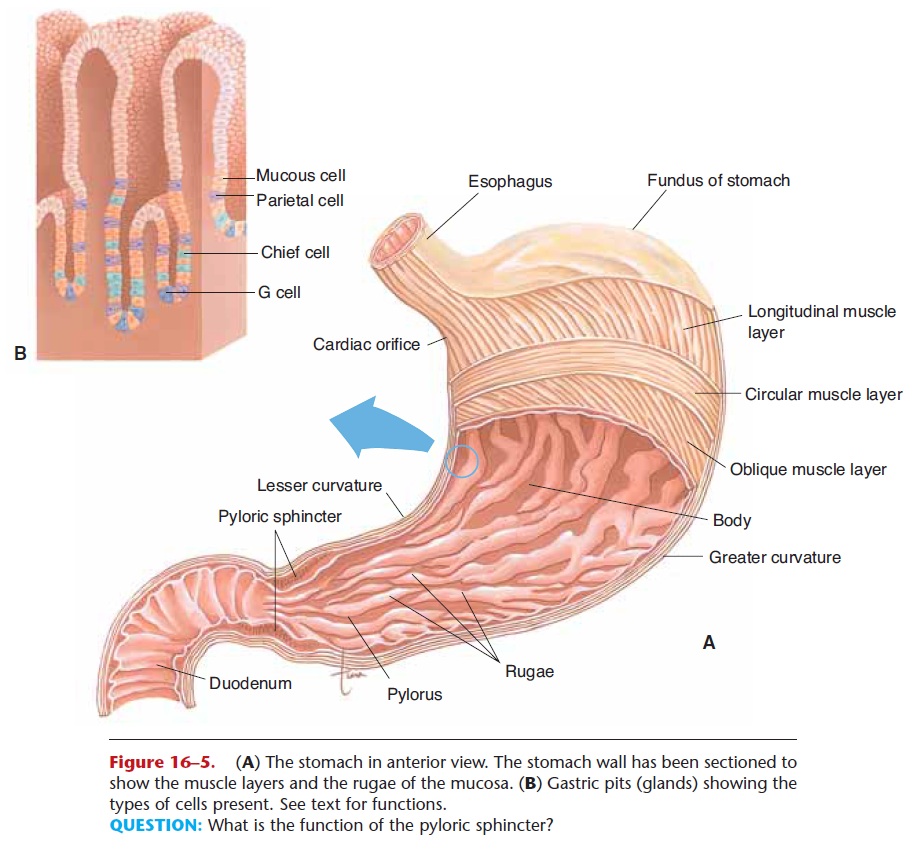 Figure 16–5. (A) The stomach in anterior view. The stomach wall has been sectioned to show the muscle layers and the rugae of the mucosa. (B) Gastric pits (glands) showing the types of cells present. See text for functions.

When the stomach is empty, the mucosa appears wrinkled or folded. These folds are called rugae; they flatten out as the stomach is filled and permit expan-sion of the lining without tearing it. The gastric pits are the glands of the stomach and consist of several types of cells; their collective secretions are called gas-tric juice.

Mucous cells secrete mucus, which coats the stomach lining and helps prevent erosion by the gastric juice. Chief cells secrete pepsinogen, an inac-tive form of the enzyme pepsin. Parietal cells pro-duce hydrochloric acid (HCl); these cells have enzymes called proton pumps, which secrete H+ ions into the stomach cavity. The H+ ions unite with Cl– ions that have diffused from the parietal cells to form HCl in the lumen of the stomach. HCl converts pepsinogen to pepsin, which then begins the digestion of proteins to polypeptides, and also gives gastric juice its pH of 1 to 2. This very acidic pH is necessary for pepsin to function and also kills most microorganisms that enter the stomach. The parietal cells also secrete intrinsic factor, which is necessary for the absorption of vitamin B12. Enteroendocrine cells called G cells secrete the hormone gastrin.

Gastric juice is secreted in small amounts at the sight or smell of food. This is a parasympathetic response that ensures that some gastric juice will be present in the stomach when food arrives. The pres-ence of food in the stomach causes the G cells to secretegastrin, a hormone that stimulates the secre-tion of greater amounts of gastric juice.

The external muscle layer of the stomach consists of three layers of smooth muscle: circular, longitudi-nal, and oblique layers. These three layers are inner-vated by the myenteric plexuses of the enteric nervous system. Stimulatory impulses are carried from the CNS by the vagus nerves (10th cranial) and provide for very efficient mechanical digestion to change food into a thick liquid called chyme. The pyloric sphincter is usually contracted when the stomach is churning food; it relaxes at intervals to permit small amounts of chyme to pass into the duodenum. This sphincter then contracts again to prevent the backup of intestinal contents into the stomach.