Food enters the oral cavity (or buccal cavity) by way of the mouth.

The function of the teeth is, of course, chewing. This is the process that mechanically breaks food into smaller pieces and mixes it with saliva. An individual develops two sets of teeth: deciduous and permanent.

The deciduous teeth begin to erupt through the gums at about 6 months of age, and the set of 20 teeth is usually complete by the age of 2 years. These teeth are gradually lost throughout childhood and replaced by the permanent teeth, the first of which are molars that emerge around the age of 6 years. A complete set of permanent teeth consists of 32 teeth; the types of teeth are incisors, canines, premolars, and molars. The wisdom teeth are the third molars on either side of each jawbone. In some people, the wisdom teeth may not emerge from the jawbone because there is no room for them along the gum line. These wisdom teeth are said to be impacted and may put pressure on the roots of the second molars. In such cases, extrac-tion of a wisdom tooth may be necessary to prevent damage to other teeth.

The structure of a tooth is shown in Fig. 16–2. The crown is visible above the gum (gingiva). The root is enclosed in a socket in the mandible or maxillae. The periodontal membrane lines the socket and produces a bone-like cement that anchors the tooth. The outer-most layer of the crown is enamel, which is made by cells called ameloblasts. Enamel provides a hard chew-ing surface and is more resistant to decay than are other parts of the tooth. Within the enamel is dentin, which is very similar to bone and is produced by cells called odontoblasts. Dentin also forms the roots of a tooth. The innermost portion of a tooth is the pulp cavity, which contains blood vessels and nerve end-ings of the trigeminal nerve (5th cranial). Erosion of the enamel and dentin layers by bacterial acids (dental caries or cavities) may result in bacterial invasion of the pulp cavity and a very painful toothache.

The tongue is made of skeletal muscle that is inner-vated by the hypoglossal nerves (12th cranial). On the upper surface of the tongue are small projections called papillae, many of which contain taste buds. The sensory nerves for taste are also cranial nerves: the facial (7th) and glossopharyngeal (9th). As you know, the sense of taste is important because it makes eating enjoyable, but the tongue has other functions as well.

Chewing is efficient because of the action of the tongue in keeping the food between the teeth and mixing it with saliva. Elevation of the tongue is the first step in swallowing. This is a voluntary action, in which the tongue contracts and meets the resistance of the hard palate. The mass of food, called a bolus, is thus pushed backward toward the pharynx. The remainder of swallowing is a reflex, which is described in the section on the pharynx.

The digestive secretion in the oral cavity is saliva, produced by three pairs of salivary glands, which are shown in Fig. 16–3. Theparotid glands are just below and in front of the ears. The submandibular (also called submaxillary) glands are at the posterior corners of the mandible, and the sublingual glands are below the floor of the mouth. Each gland has at least one duct that takes saliva to the oral cavity. 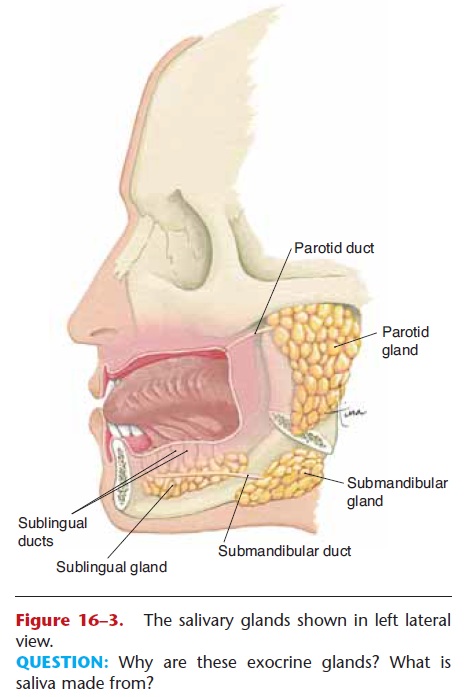 QUESTION: Why are these exocrine glands? What is saliva made from?

Secretion of saliva is continuous, but the amount varies in different situations. The presence of food (or anything else) in the mouth increases saliva secre-tion. This is a parasympathetic response mediated by the facial and glossopharyngeal nerves. The sight or smell of food also increases secretion of saliva. Sympathetic stimulation in stress situations decreases secretion, making the mouth dry and swallowing difficult.

Saliva is mostly water, which is important to dis-solve food for tasting and to moisten food for swal-lowing. The digestive enzyme in saliva is salivary amylase, which breaks down starch molecules to shorter chains of glucose molecules, or to maltose, a disaccharide. Most of us, however, do not chew our food long enough for the action of salivary amylase to be truly effective. As you will see, another amylase from the pancreas is also available to digest starch. Table 16–1 summarizes the functions of digestive secretions. 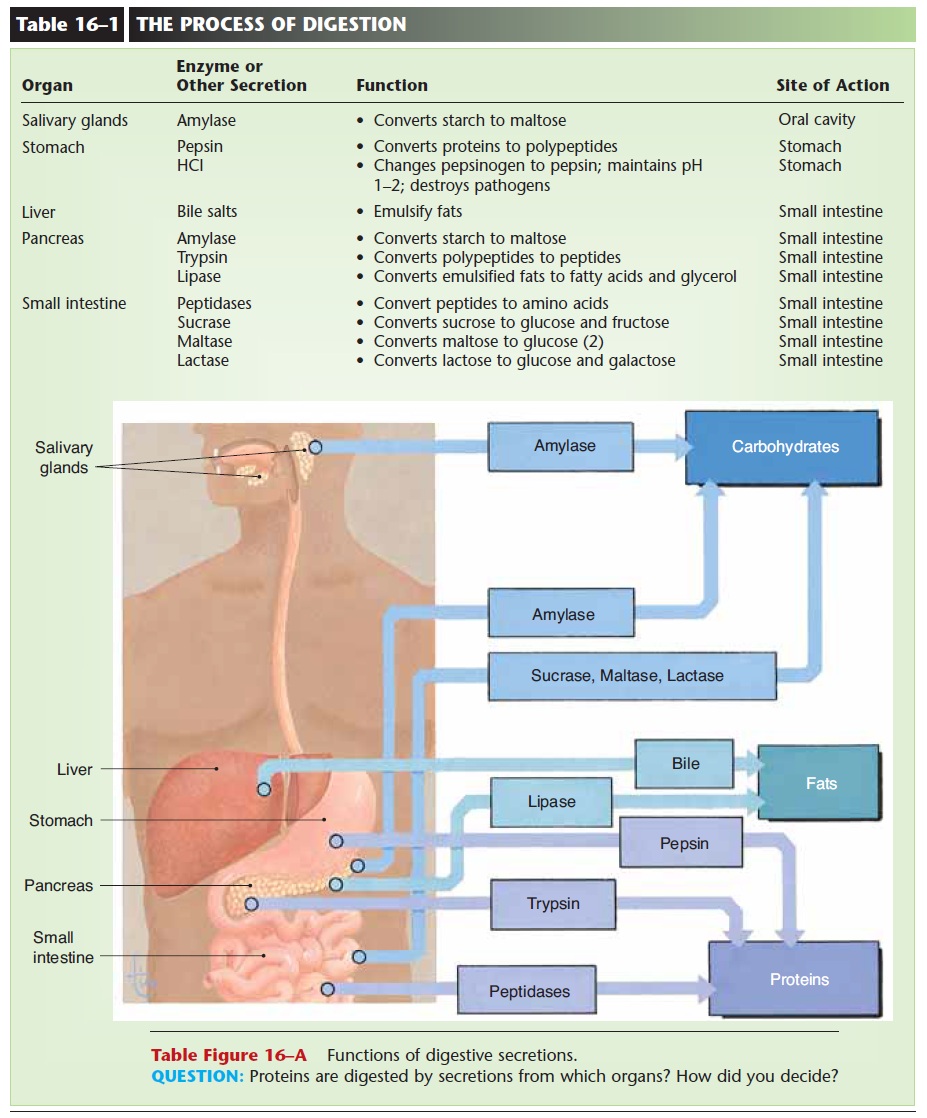 Saliva is made from blood plasma and thus contains many of the chemicals that are found in plasma. Considerable research is focused on detecting in saliva chemical markers for diseases such as cancer, with the goal of using saliva rather than blood for diagnostic tests. 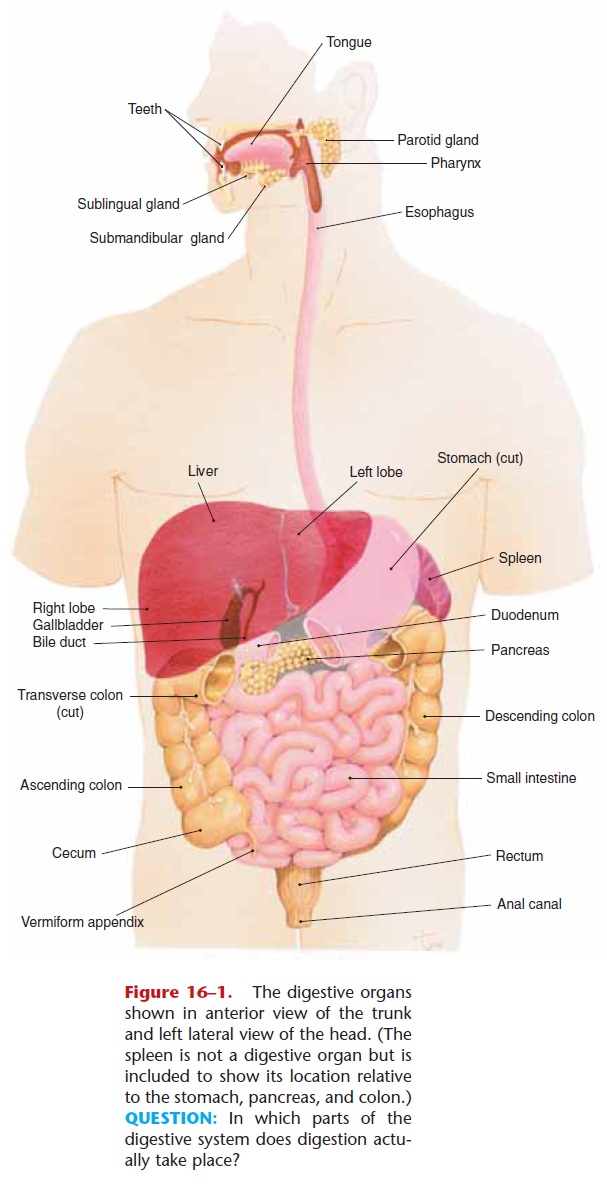 Figure 16–1. The digestive organs shown in anterior view of the trunk and left lateral view of the head. (The spleen is not a digestive organ but is included to show its location relative to the stomach, pancreas, and colon.) QUESTION: In which parts of the digestive system does digestion actu-ally take place?