Meiosis. Spermatogonia that cross the barrier into theSertoli cell layer become progressively modified and enlarged to form largeprimary spermatocytes (Figure 80–3). Each of these, in turn, undergoes meiotic division to form two secondary spermatocytes. After another few days, these too divide to form spermatids that are eventually modified to become spermatozoa (sperm).

The entire period of spermatogenesis, from sper-matogonia to spermatozoa, takes about 74 days.

Sex Chromosomes. In each spermatogonium, one of the23 pairs of chromosomes carries the genetic informa-tion that determines the sex of each eventual offspring. This pair is composed of one X chromosome, which is called the female chromosome, and one Y chromo-some, the male chromosome. During meiotic division, the male Y chromosome goes to one spermatid that then becomes amale sperm, and the female X chro-mosome goes to another spermatid that becomes a female sperm. The sex of the eventual offspring isdetermined by which of these two types of sperm fertilizes the ovum.

Formation of Sperm. When the spermatids are firstformed, they still have the usual characteristics of epithelioid cells, but soon they begin to differentiate and elongate into spermatozoa. As shown in Figure 80–4, each spermatozoon is composed of a head and a tail. The head comprises the condensed nucleus of thecell with only a thin cytoplasmic and cell membrane layer around its surface. On the outside of the anterior two thirds of the head is a thick cap called the acro-some that is formed mainly from the Golgi apparatus. This contains a number of enzymes similar to those found in lysosomes of the typical cell, including 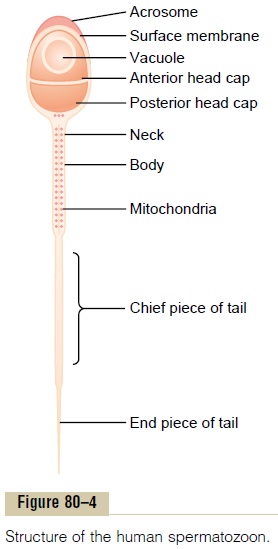 The tail of the sperm, called the flagellum, has three major components: (1) a central skeleton constructed of 11 microtubules, collectively called the axoneme— the structure of this is similar to that of cilia found on the surfaces of other types of cells; (2) a thin cell membrane covering the axoneme; and (3) a collection of mitochondria sur-rounding the axoneme in the proximal portion of the tail (called the body of the tail).

Back-and-forth movement of the tail (flagellar movement) provides motility for the sperm. This movement results from a rhythmical longitudinal sliding motion between the anterior and posterior tubules that make up the axoneme. The energy for this process is supplied in the form of adenosine triphos-phate that is synthesized by the mitochondria in the body of the tail.

Normal sperm move in a fluid medium at a velocity of 1 to 4 mm/min. This allows them to move through the female genital tract in quest of the ovum.

We shall discuss the role of hormones in reproduction later, but at this point, let us note that several hor-mones play essential roles in spermatogenesis. Some of these are as follows:

1.              Testosterone, secreted by the Leydig cells locatedin the interstitium of the testis, is essential for growth and division of the testicular germinal cells, which is the first stage in forming sperm.

3. Follicle-stimulating hormone, also secreted by theanterior pituitary gland, stimulates the Sertolicells; without this stimulation, the conversion of the spermatids to sperm (the process of spermiogenesis) will not occur.

4. Estrogens, formed from testosterone by theSertoli cells when they are stimulated by follicle-stimulating hormone, are probably also essential for spermiogenesis.

5.              Growth hormone (as well as most of the otherbody hormones) is necessary for controlling background metabolic functions of the testes. Growth hormone specifically promotes early division of the spermatogonia themselves; in its absence, as in pituitary dwarfs, spermatogenesis is severely deficient or absent, thus causing infertility.

Maturation of Sperm in the Epididymis

Storage of Sperm. The two testes of the human adultform up to 120 million sperm each day. A small quan-tity of these can be stored in the epididymis, but most are stored in the vas deferens. They can remain stored, maintaining their fertility, for at least a month. During this time, they are kept in a deeply suppressed inactive state by multiple inhibitory substances in the secre-tions of the ducts. Conversely, with a high level of sexual activity and ejaculations, storage may be no longer than a few days.

After ejaculation, the sperm become motile, and they also become capable of fertilizing the ovum, a process called maturation. The Sertoli cells and the epithelium of the epididymis secrete a special nutrient fluid that is ejaculated along with the sperm. This fluid contains hormones (including both testosterone and estrogens), enzymes, and special nutrients that are essential for sperm maturation.

Physiology of the Mature Sperm. The normal motile, fertilesperm are capable of flagellated movement though the fluid medium at velocities of 1 to 4 mm/min. The activity of sperm is greatly enhanced in a neutral and slightly alkaline medium, as exists in the ejacu-lated semen, but it is greatly depressed in a mildly acidic medium. A strong acidic medium can cause rapid death of sperm.

The activity of sperm increases markedly with in-creasing temperature, but so does the rate of metabo-lism, causing the life of the sperm to be considerably shortened. Although sperm can live for many weeks in the suppressed state in the genital ducts of the testes, life expectancy of ejaculated sperm in the female genital tract is only 1 to 2 days.