In general, testosterone is responsible for the distin-guishing characteristics of the masculine body.

In general, testosterone is responsible for the distin-guishing characteristics of the masculine body. Even during fetal life, the testes are stimulated by chorionic gonadotropin from the placenta to produce moderate quantities of testosterone throughout the entire period of fetal development and for 10 or more weeks after birth; thereafter, essentially no testosterone is produced during childhood until about the ages of 10 to 13 years. Then testosterone production increases rapidly under the stimulus of anterior pituitary gonadotropic hormones at the onset of puberty and lasts throughout most of the remainder of life, as shown in Figure 80–9, dwindling rapidly beyond age 50 to become 20 to 50 per cent of the peak value by age 80. 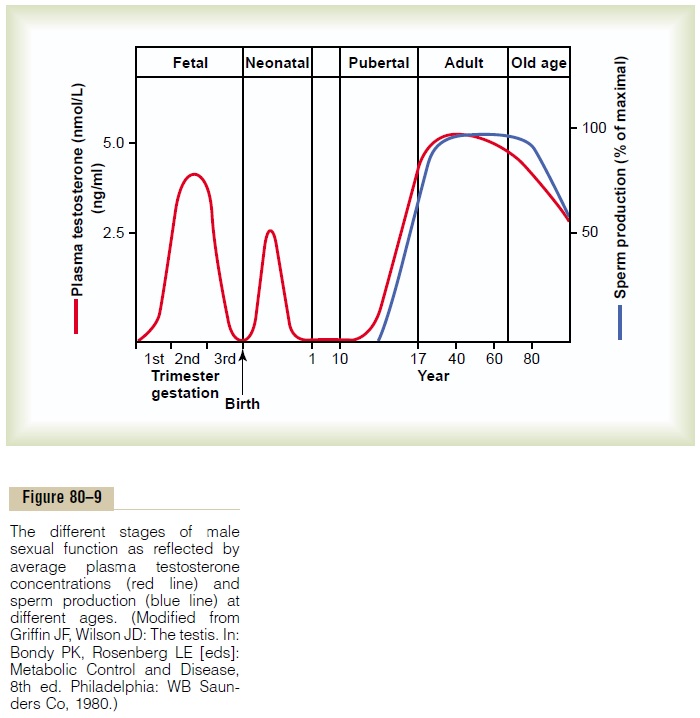 Functions of Testosterone During Fetal Development

Testosterone begins to be elaborated by the male fetal testes at about the seventh week of embryonic life. Indeed, one of the major functional differences between the female and the male sex chromosome is that the male chromosome causes the newly develop-ing genital ridge to secrete testosterone, whereas the female chromosome causes this ridge to secrete estro-gens. Injection of large quantities of male sex hormone into pregnant animals causes development of male sexual organs even though the fetus is female. Also, removal of the testes in the early male fetus causes development of female sexual organs.

Effect of Testosterone to Cause Descent of the Testes. Thetestes usually descend into the scrotum during the last 2 to 3 months of gestation when the testes begin secret-ing reasonable quantities of testosterone. If a male child is born with undescended but otherwise normal testes, the administration of testosterone usually causes the testes to descend in the usual manner if the inguinal canals are large enough to allow the testes to pass.

Administration of gonadotropic hormones, which stimulate the Leydig cells of the newborn child’s testes to produce testosterone, can also cause the testes to descend. Thus, the stimulus for descent of the testes is testosterone, indicating again that testosterone is an important hormone for male sexual development during fetal life.

After puberty, the increasing amounts of testosterone secretion cause the penis, scrotum, and testes to enlarge about eightfold before the age of 20 years. In addition, testosterone causes the secondary sexual characteristics of the male to develop, beginning at puberty and ending at maturity. These secondary sexual characteristics, in addition to the sexual organs themselves, distinguish the male from the female as follows.

Effect on the Distribution of Body Hair. Testosterone causesgrowth of hair (1) over the pubis, (2) upward along the linea alba of the abdomen sometimes to the umbilicus and above, (3) on the face, (4) usually on the chest, and (5) less often on other regions of the body, such as the back. It also causes the hair on most other portions of the body to become more prolific.

Baldness. Testosterone decreases the growth of hair onthe top of the head; a man who does not have functional testes does not become bald. However, many virile men never become bald because baldness is a result of two factors: first, a genetic background for the development of baldness and, second, superimposed on this genetic background, large quantities of andro-genic hormones. A woman who has the appropriategenetic background and who develops a long-sustained androgenic tumor becomes bald in the same manner as does a man.

Effect on the Voice. Testosterone secreted by the testesor injected into the body causes hypertrophy of the laryngeal mucosa and enlargement of the larynx. The effects cause at first a relatively discordant, “cracking” voice, but this gradually changes into the typical adult masculine voice.

Testosterone Increases Thickness of the Skin and Can Con-tribute to Development of Acne. Testosterone increasesthe thickness of the skin over the entire body and increases the ruggedness of the subcutaneous tissues. Testosterone also increases the rate of secretion by some or perhaps all the body’s sebaceous glands. Especially important is excessive secretion by the sebaceous glands of the face, because this can result in acne. Therefore, acne is one of the most common features of male adolescence when the body is first becoming introduced to increased testosterone. After several years of testosterone secretion, the skin nor-mally adapts to the testosterone in a way that allows it to overcome the acne.

Testosterone Increases Protein Formation and Muscle Devel- opment. One of the most important male characteris-tics is development of increasing musculature after puberty, averaging about a 50 per cent increase in muscle mass over that in the female. This is associated with increased protein in the nonmuscle parts of the body as well. Many of the changes in the skin are due to deposition of proteins in the skin, and the changes in the voice also result partly from this protein ana-bolic function of testosterone.

Because of the great effect that testosterone and other androgens have on the body musculature, synthetic androgens are widely used by athletes to improve their muscular performance. This practice is to be severely deprecated because of prolonged harmful effects of excess androgens, as we discuss in relation to sports physiology. Testosterone or syn-thetic androgens are also occasionally used in old age as a “youth hormone” to improve muscle strength and vigor, but with questionable results.

Testosterone Increases Bone Matrix and Causes Calcium Reten- tion. After the great increase in circulating testos-terone that occurs at puberty (or after prolonged injection of testosterone), the bones grow considerably thicker and deposit considerable additional calcium salts. Thus, testosterone increases the total quantity of bone matrix and causes calcium retention. The increase in bone matrix is believed to result from the general protein anabolic function of testosterone plus deposition of calcium salts in response to the increased protein.

Testosterone has a specific effect on the pelvis to (1) narrow the pelvic outlet, (2) lengthen it, (3) cause a funnel-like shape instead of the broad ovoid shape of the female pelvis, and (4) greatly increase the strength of the entire pelvis for load-bearing. In the absence of testosterone, the male pelvis develops into a pelvis that is similar to that of the female.

Because of the ability of testosterone to increase the size and strength of bones, it is often used in older men to treat osteoporosis.

When great quantities of testosterone (or any other androgen) are secreted abnormally in the still-growing child, the rate of bone growth increases markedly, causing a spurt in total body height. However, the testosterone also causes the epiphyses of the long bones to unite with the shafts of the bones at an early age. Therefore, despite the rapidity of growth, this early uniting of the epiphyses prevents the person from growing as tall as he would have grown had testosterone not been secreted at all. Even in normal men, the final adult height is slightly less than that which occurs in males castrated before puberty.

Testosterone Increases Basal Metabolism. Injection oflarge quantities of testosterone can increase the basal metabolic rate by as much as 15 per cent. Also, even the usual quantity of testosterone secreted by the testes during adolescence and early adult life increases the rate of metabolism some 5 to 10 per cent above the value that it would be were the testes not active. This increased rate of metabolism is possibly an indirect result of the effect of testosterone on protein anabolism, the increased quantity of proteins—the enzymes especially—increasing the activities of all cells.

Effect on Electrolyte and Water Balance. As pointed out, many steroid hormones can increase the reabsorption of sodium in the distal tubules of the kidneys. Testosterone also has such an effect, but only to a minor degree in comparison with the adrenal min-eralocorticoids. Nevertheless, after puberty, the blood and extracellular fluid volumes of the male in relation to body weight increase as much as 5 to 10 per cent.