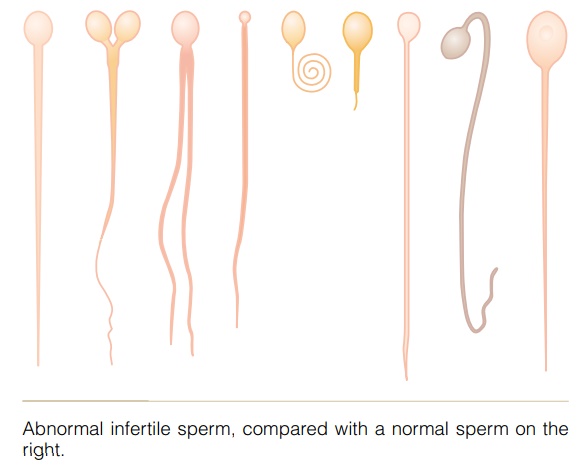 The seminiferous tubular epithelium can be destroyed by a number of diseases.

The seminiferous tubular epithelium can be destroyed by a number of diseases. For instance, bilateral orchitis of the testes resulting from mumpscauses sterility in some affected males. Also, some male infants are born with degenerate tubular epithelia as a result of strictures in the genital ducts or other abnormalities. Finally, another cause of sterility, usually temporary, is excessivetemperature of the testes.

Cryptorchidism means failure of a testis to descend from the abdomen into the scrotum at or near the time of birth of a fetus. During development of the male fetus, the testes are derived from the genital ridges in the abdomen. However, at about 3 weeks to 1 month before birth of the baby, the testes normally descend through the inguinal canals into the scrotum. Occasion-ally this descent does not occur or occurs incompletely, so that one or both testes remain in the abdomen, in the inguinal canal, or elsewhere along the route of descent.

A testis that remains throughout life in the abdomi-nal cavity is incapable of forming sperm. The tubular epithelium becomes degenerate, leaving only the interstitial structures of the testis. It has been claimed that even the few degrees’ higher temperature in the abdomen than in the scrotum is sufficient to cause this degeneration of the tubular epithelium and, conse-quently, to cause sterility, although this is not certain. Nevertheless, for this reason, operations to relocate the cryptorchid testes from the abdominal cavity into the scrotum before the beginning of adult sexual life are frequently performed on boys who have undescended testes.

Testosterone secretion by the fetal testes themselves is the normal stimulus that causes the testes to descend into the scrotum from the abdomen. Therefore, many, if not most, instances of cryptorchidism are caused by abnormally formed testes that are unable to secrete enough testosterone. The surgical operation for cryp-torchidism in these patients is unlikely to be successful.

Effect of Sperm Count on Fertility. The usual quantity ofsemen ejaculated during each coitus averages about 3.5 milliliters, and in each milliliter of semen is an average of about 120 million sperm, although even in “normal” males this can vary from 35 million to 200 million. This means an average total of 400 million sperm are usually present in the several milliliters of each ejaculate. When the number of sperm in each milliliter falls below about 20 million, the person is likely to be infertile. Thus, even though only a single sperm is necessary to fertilize the ovum, for reasons not understood, the ejaculate usually must contain a tremendous number of sperm for only one sperm to fertilize the ovum.

Effect of Sperm Morphology and Motility on Fertility. Occa-sionally a man has a normal number of sperm but is still infertile. When this occurs, sometimes as many as one half the sperm are found to be abnormal physically, having two heads, abnormally shaped heads, or abnor-mal tails, as shown in Figure 80–5. At other times, the sperm appear to be structurally normal, but for reasons not understood, they are either entirely nonmotile or relatively nonmotile. Whenever the majority of the sperm are morphologically abnormal or are nonmotile, the person is likely to be infertile, even though the remainder of the sperm appear to be normal. 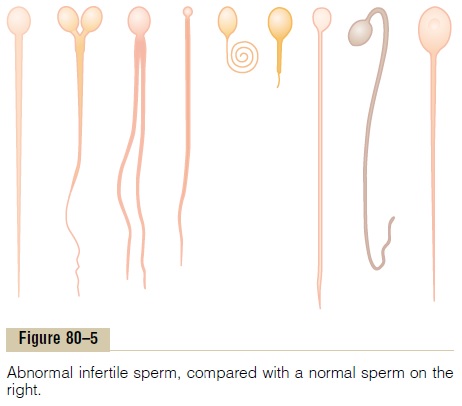