Secretion, Metabolism, and Chemistry of the Male Sex Hormone

Secretion of Testosterone by the Interstitial Cells of Leydig in the Testes.

Secretion, Metabolism, and Chemistry of the Male Sex Hormone

Secretion of Testosterone by the Interstitial Cells of Leydig in the Testes. The testes secrete several male sexhormones, which are collectively called androgens, including testosterone, dihydrotestosterone, and androstenedione. Testosterone is so much more abun-dant than the others that one can consider it to be the significant testicular hormone, although as we shall see, much, if not most, of the testosterone is eventually converted into the more active hormone dihy-drotestosterone in the target tissues.

Testosterone is formed by the interstitial cells ofLeydig, which lie in the interstices between the semi-niferous tubules and constitute about 20 per cent of the mass of the adult testes, as shown in Figure 80–7. 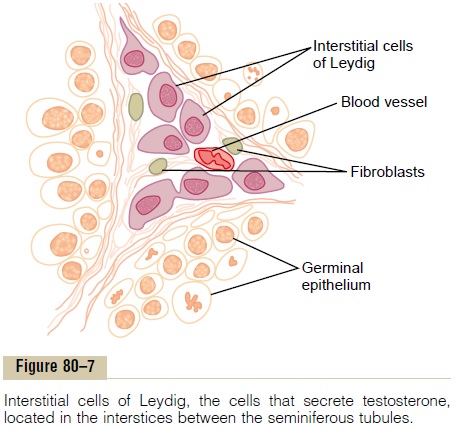 Leydig cells are almost nonexistent in the testes during childhood when the testes secrete almost no testos-terone, but they arenumerous in the newborn male infant for the first few months of life and in the adult male any time after puberty; at both these times the testes secrete large quantities of testosterone. Fur-thermore, when tumors develop from the interstitial cells of Leydig, great quantities of testosterone are secreted. Finally, when the germinal epithelium of the testes is destroyed by x-ray treatment or excessive heat, the Leydig cells, which are less easily destroyed, often continue to produce testosterone.

Secretion of Androgens Elsewhere in the Body. The term“androgen” means any steroid hormone that has mas-culinizing effects, including testosterone itself; it also includes male sex hormones produced elsewhere in the body besides the testes. For instance, the adrenal glands secrete at least five androgens, although the total mas-culinizing activity of all these is normally so slight (less  than 5 per cent of the total in the adult male) that even in women they do not cause significant masculine char-acteristics, except for causing growth of pubic and axil-lary hair. But when an adrenal tumor of the adrenal androgen-producing cells occurs, the quantity of androgenic hormones may then become great enough to cause all the usual male secondary sexual charac-teristics to occur even in the female.

Chemistry of the Androgens. All androgens are steroidcompounds, as shown by the formulas in Figure 80–8 for testosterone anddihydrotestosterone. Both in the testesand in the adrenals, the androgens can be synthesized either from cholesterol or directly from acetyl coen-zyme A. 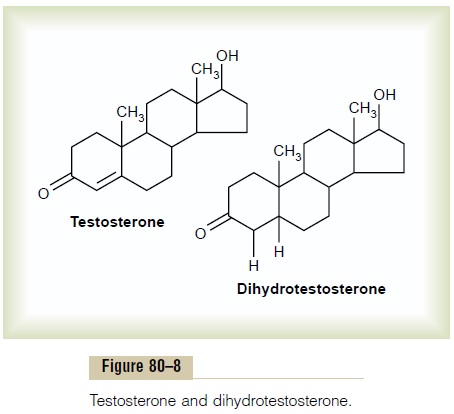 Metabolism of Testosterone. After secretion by the testes,about 97 per cent of the testosterone becomes either loosely bound with plasma albumin or more tightly bound with a beta globulin called sex hormone–bindingglobulin and circulates in the blood in these statesfor 30 minutes to several hours. By that time, the testosterone either is transferred to the tissues or is degraded into inactive products that are subsequently excreted.

Much of the testosterone that becomes fixed to the tissues is converted within the tissue cells to dihy-drotestosterone, especially in certain target organs suchas the prostate gland in the adult and the external gen-italia of the male fetus. Some actions of testosterone are dependent on this conversion, whereas other actions are not.

Degradation and Excretion of Testosterone. The testosteronethat does not become fixed to the tissues is rapidly con-verted, mainly by the liver, into androsterone and dehy-droepiandrosterone and simultaneously conjugated aseither glucuronides or sulfates (glucuronides, particu-larly). These are excreted either into the gut by way of the liver bile or into the urine through the kidneys.

Production of Estrogen in the Male. In addition to testos-terone, small amounts of estrogens are formed in the male (about one fifth the amount in the nonpregnant female), and a reasonable quantity of estrogens can be recovered from a man’s urine. The exact source of estro-gens in the male is unclear, but the following are known: (1) the concentration of estrogens in the fluid of the seminiferous tubules is quite high and probably plays an important role in spermiogenesis. This estrogen is believed to be formed by the Sertoli cells by converting testosterone to estradiol. (2) Much larger amounts of estrogens are formed from testosterone and androstanediol in other tissues of the body, especially the liver, probably accounting for as much as 80 per cent of the total male estrogen production.