The stability of coordination complexes can be interpreted in two different ways. The first one is thermodynamic stability and second one is kinetic stability.

The stability of a coordination complex is a measure of its resistance to the replacement of one ligand by another. The stability of a complex refers to the degree of association between two species involved in an equilibrium. Let us consider the following complex formation reaction

Generally coordination complexes are stable in their solutions; however, the complex ion can undergo dissociation to a small extent. Extent of dissociation depends on the strength of the metal ligand bond, thus Stronger the M ← L , lesser is the dissociation.

The dissociation equilibrium constant or instability constant is represented as follows,

By comparing stability constant values in the above table, we can say that among the five complexes listed, [Hg ( CN)4 ]2− is most stable complex ion and [ Fe ( SCN)]2+ is least stable.

When a free metal ion is in aqueous medium, it is surrounded by (coordinated with) water molecules. It is represented as [MS6]. If ligands which are stronger than water are added to this metal salt solution, coordinated water molecules are replaced by strong ligands.

Let us consider the formation of a metal complex ML6 in aqueous medium.(Charge on the metal ion is ignored) complex formation may occur in single step or step by step.

If ligands added to the metal ion in single step, then

βoverall is called as overall stability constant. As solvent is present in large excess, its concentration in the above equation can be ignored.

If these six ligands are added to the metal ion one by one, then the formation of complex [ML6] can be supposed to take place through six different steps as shown below. Generally step wise stability constants are represented by the symbol k. 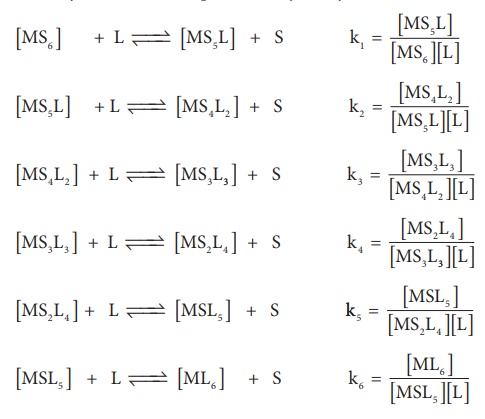 On taking logarithm both sides

2. Importance and applications of coordination complexes:

1.        Phthalo blue – a bright blue pigment is a complex of Copper (II) ion and it is used in printing ink and in the packaging industry.

3.     EDTA is used as a chelating ligand for the separation of lanthanides,in softening of hard water and also in removing lead poisoning.

6.        Many of the complexes are used as catalysts in organic and inorganic reactions. For example,

(i) Wilkinson’s catalyst – [( PPh3 )3 RhCl] is used for hydrogenation of alkenes.

8.     Many complexes are used as medicines for the treatment of various diseases. For example,

(ii) Cis-platin is used as an antitumor drug in cancer treatment.

9.     In photography, when the developed film is washed with sodium thio sulphatesolution (hypo), the negative film gets fixed. Undecomposed AgBr forms a soluble complex called sodiumdithiosulphatoargentate(I) which can be easily removed by washing the film with water.

·           A red blood corpuscles (RBC) is composed of heme group, which is Fe2+- Porphyrin complex.it plays an important role in carrying oxygen from lungs to tissues and carbon dioxide from tissues to lungs.

·           Chlorophyll, a green pigment present in green plants and algae, is a coordination complex containing Mg2+ as central metal ion surrounded by a modified Porphyrin ligand called corrin ring. It plays an important role in photosynthesis, by which plants converts CO2 and water into carbohydrates and oxygen.

·           Vitamin B12(cyanocobalamine) is the only vitamin consist of metal ion. it is a coordination complex in which the central metal ion is Co+ surrounded by Porphyrin like ligand.

·           Many enzymes are known to be metal complexes, they regulate biological processes. For example, Carboxypeptidase is a protease enzyme that hydrolytic enzyme important in digestion, contains a zinc ion coordinated to the protein.