Crystal Field Theory (CFT) assumes that the bond between the ligand and the central metal atom is purely ionic.

Valance bond theory helps us to visualise the bonding in complexes. However, it has limitations as mentioned above. Hence Crystal Field Theory to expalin some of the properties like colour, magnetic behavior etc.,This theory was originally used to explain the nature of bonding in ionic crystals. Later on, it is used to explain the properties of transition metals and their complexes. The salient features of this theory are as follows.

3.        According to crystal field theory, the complex formation is considered as the following series of hypothetical steps.

Step 2: The ligands are approaching the metal atom in actual bond directions. To illustrate this let us consider an octahedral field, in which the central metal ion is located at the origin and the six ligands are coming from the +x, -x, +y, -y, +z and -z directions as shown below. 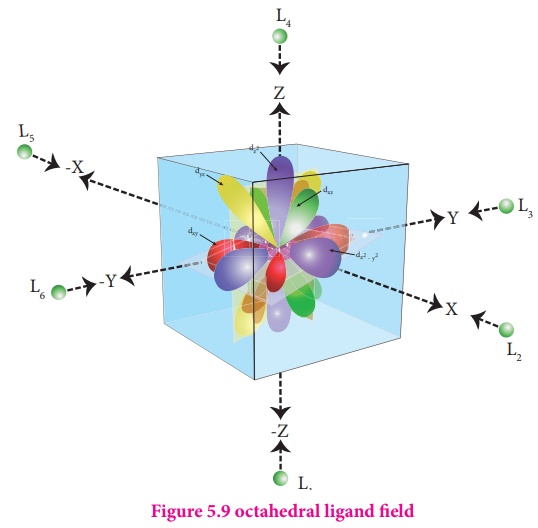 As shown in the figure, the orbitals lying along the axes dx2-y2 and dz2 orbitals will experience strong repulsion and raise in energy to a greater extent than the orbitals with lobes directed between the axes (d xy, dyz and dzx). Thus the degenerate d orbitals now split into two sets and the process is called crystal field splitting. 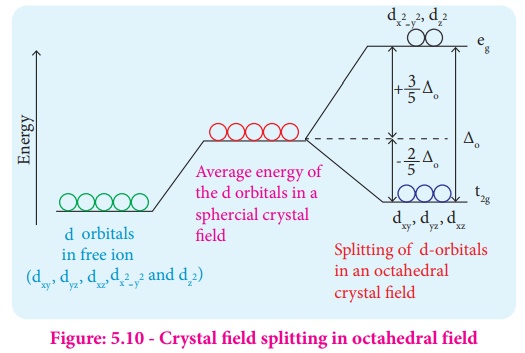 During crystal field splitting in octahedral field, in order to maintain the average energy of the orbitals (barycentre) constant, the energy of the orbitals dx2-y2 and dz2 (represented as eg orbitals) will increase by 3/5Δo while that of the other three orbitals dxy, dyz and dzx (represented as t2g orbitals) decrease by 2/5Δo. Here, Δo represents the crystal field splitting energy in the octahedral field. 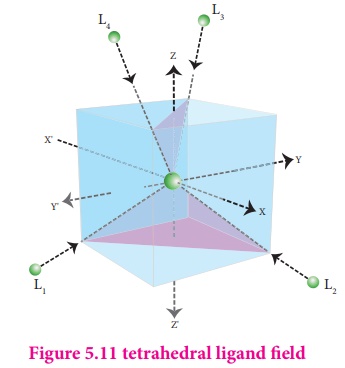 In this field, none of the d orbitals point dirctly towards the ligands,however the t2 orbitals (dxy, dyz and dzx) are pointing close to the direction in which ligands are approaching than the e orbitals (dx2-y2 and d z2).

As a result, the energy of t2 orbitals increases by 2/5Δt and that of e orbitals decreases by 3/5Δt as shown below. when compared to the octahedral field, this splitting is inverted and the spliting energy is less. The relation between the crystal field splitting energy in octahedral and tetrahedral ligand field is given by the expression; Energy ∆t = 4/9 ∆0 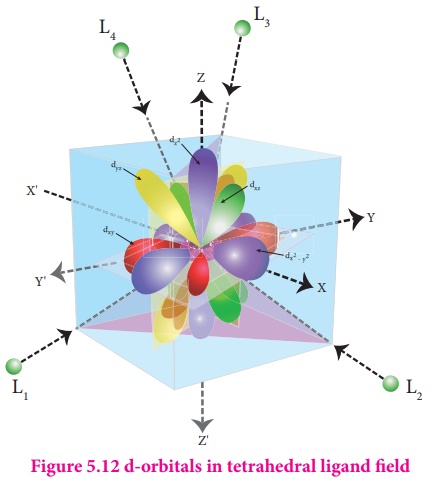 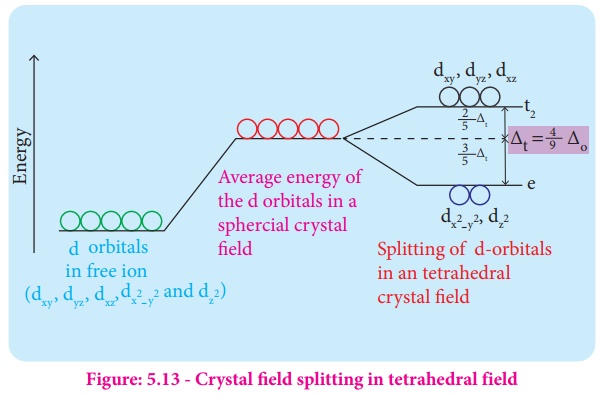 where h is the Plank' s constant; c is velocity of light, υ is the wave number of absorption maximum which is equal to 1/λ 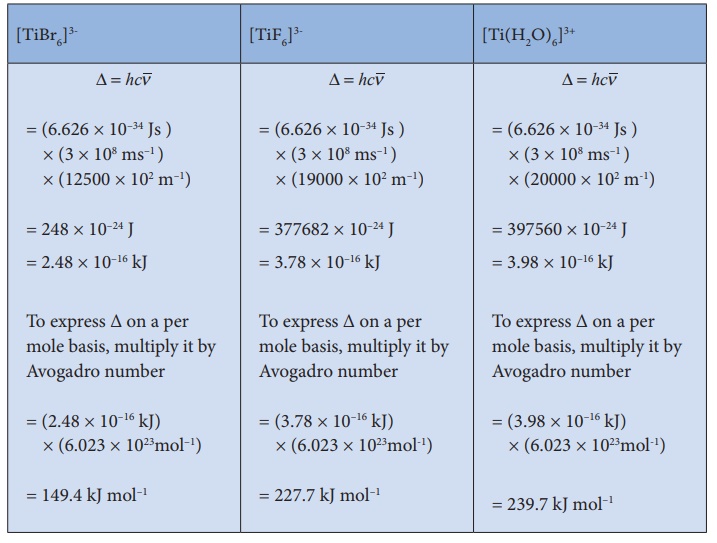 From the above calculations, it is clear that the crystal filed splitting energy of the Ti3+ in complexes,the three ligands is in the order; Br- < F- < H2O. Similarly, it has been found form the spectral data that the crystal field splitting power of various ligands for a given metal ion, are in the following order

The filling of electrons in the d orbitals in the presence of ligand field also follows Hund's rule. In the octahedral complexes with d2 and d3 configurations, the electrons occupy different degenerate t2g orbitals and remains unpaired. In case of d4 configuration, there are two possibilities. The fourth electron may either go to the higher energy eg orbitals or it may pair with one of the t2g electrons. In this scenario, the preferred configuration will be the one with lowest energy.

For example, let us consider two different iron(III) complexes [Fe(H2O)6]3+ (weak field complex; Δo is 14000 cm‑1) and [Fe(CN)6]3- (Strong field complex; Δo is 35000 cm-1). The pairing energy of Fe3+ is 30000 cm-1. In both these complexes the Fe3+ has d5 configuration. In aqua complex, the Δo < P hence, the fourth & fifth electrons enter eg orbitals and the configuration is t2g3, eg2. In the cyanido complex Δo > P and hence the fourth & fifth electrons pair up with the electrons in the t2g orbitals and the electronic configuration is t2g5, eg0.

Calculating the CFSE for the Iron complexes 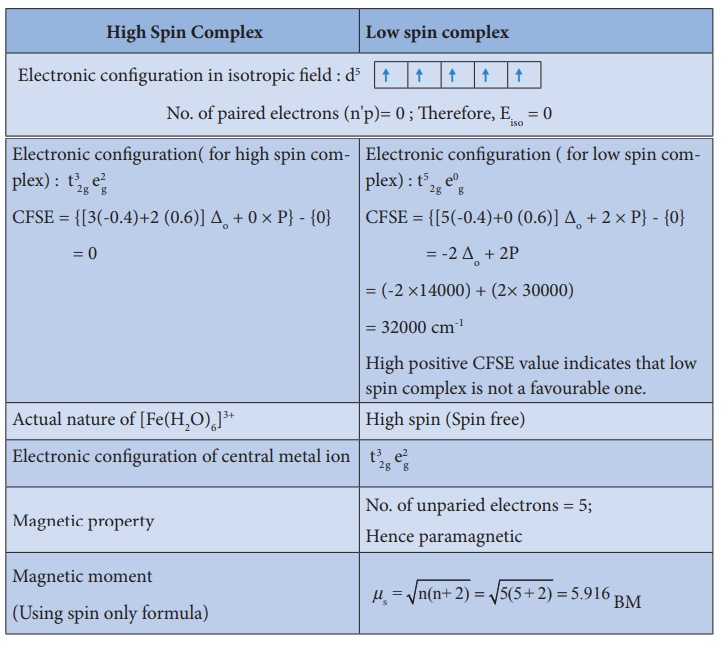 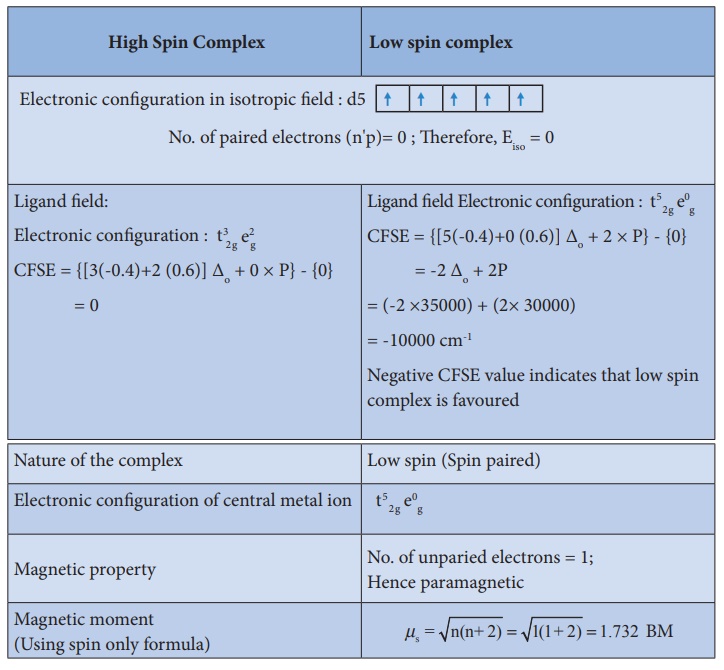 Colour of the complex and crystal field splitting energy:

Most of the transition metal complexes are coloured. A substance exhibits colour when it absorbs the light of a particular wavelength in the visible region and transmit the rest of the visible light. When this transmitted light enters our eye, our brain recognises its colour. The colour of the transmitted light is given by the complementary colour of the absorbed light. For example, the hydrated copper(II) ion is blue in colour as it absorbs orange light, and transmit its complementary colour, blue. A list of absorbed wavelength and their complementary colour is given in the following table. 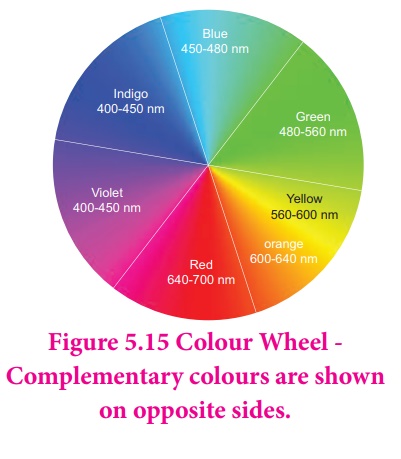 The observed colour of a coordination compound can be explained using crystal field theory. We learnt that the ligand field causes the splitting of d orbitals of the central metal atom into two sets (t2g and eg). When the white light falls on the complex ion, the central metal ion absorbs visible light corresponding to the crystal filed splitting energy and transmits rest of the light which is responsible for the colour of the complex.

This absorption causes excitation of d-electrons of central metal ion from the lower energy t2g level to the higher energy eg level which is known as d-d transition. 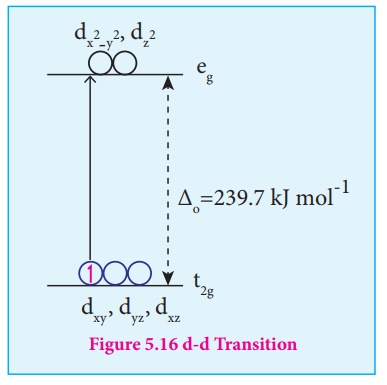 Let us understand the d-d transitions by considering [Ti(H2O)6]3+ as an example. In this complex the central metal ion is Ti3+, which has d1 configuration. This single electron occupies one of the t2g orbitals in the octahedral aqua ligand field. When white light falls on this complex the d electron absorbs light and promotes itself to eg level. The spectral data show the absorption maximum is at 20000 cm-1 corresponding to the crystal field splitting energy (Δo) 239.7 kJ mol-1. The transmitted colour associated with this absorption is purple and hence ,the complex appears purple in colour.

The octahedral titanium (III) complexes with other ligands such as bromide and fluoride have different colours. This is due to the difference in the magnitude of crystal field splitting by these ligands. However, the complexes of central metal atom such as of Sc3+, Ti4+, Cu+, Zn2+, etc... are colourless. This is because the d-d transition is not possible in complexes with central metal having d0 or d10 configuration.

Metal carbonyls are the transition metal complexes of carbon monoxide, containing Metal-Carbon bond. In these complexes CO molecule acts as a neutral ligand. The first homoleptic carbonyl [Ni(CO)4] nickel tetra carbonyl was reported by Mond in 1890.These metallic carbonyls are widely studied because of their industrial importance, catalytic properties and their ability to release carbon monoxide.

Generally metal carbonyls are classified in two different ways as described below.

(i) Classification based on the number of metal atoms present.

Depending upon the number of metal atoms present in a given metallic carbonyl, they are classified as follows.

These compounds contain only one metal atom, and have comparatively simple structures. For example, [Ni (CO)4] - nickel tetracarbonyl is tetrahedral, [ Fe (CO)5 ] - Iron pentacarbonyl  is trigonalbipyramidal, and [ Cr (CO)6] - Chromium hexacarbonyl is octahedral.

(ii) Classification based on the structure:

These metal carbonyls do not contain any bridging carbonyl ligands. They may be of two types.

(ii) Non- bridged metal carbonyls which contain terminal carbonyls as well as Metal-Metal  bonds. For examples,The structure of Mn2(CO)10 actually involve only a metal–metal  bond, so the formula is more correctly represented as (CO)5Mn−Mn(CO)5. 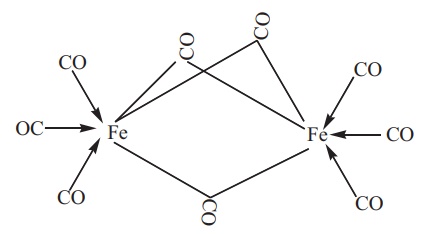 (ii) For dicobaltoctacarbonyl Co2(CO)8 two isomers are possible. The one has a metal–metal bond between the cobalt atoms, and the other has two bridging CO ligands. 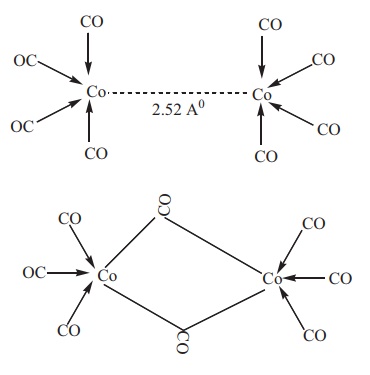